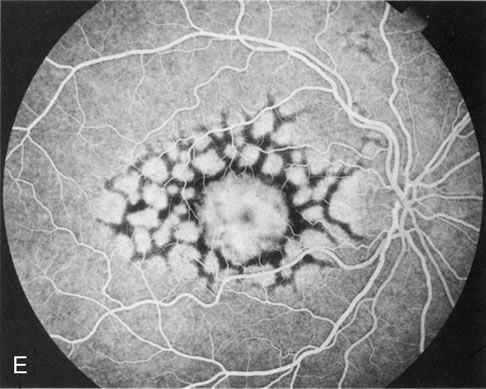 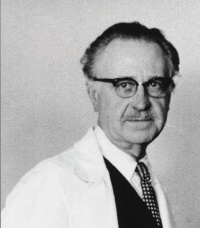 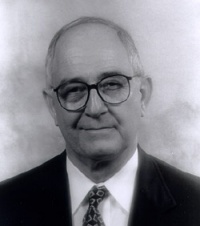 In 1974 Dr. Donald Gass from Vanderbilt University was the first to describe adult vitelliform dystrophy.

Different types of pattern dystrophies have been described throughout the 20th century by various ophthalmologists.

In 1970, butterfly dystrophy was described by Dutch ophthalmologist, August Deutman. [2]

Originally these dystrophies were thought to be stationary. However further research has shown that they do progress at a very slow pace. [4]

Based on the pattern of the pigment distribution they have been classified into 5 prominent categories: [5]

Although there are distinct patterns, one pattern may turn into another in the same patient. Some patients may have a different a pattern in each eye and some families may demonstrate different phenotypes despite sharing the same pathogenic mutation.[5] [6][7]

Pattern dystrophies are often associated with a relatively good visual prognosis, although slow progressive central vision loss can occur. Disease onset typically occurs in patients during their forties and fifties. However, older patients may be misdiagnosed as age-related macular degeneration due to similar macular patterns of pigment deposition.

These findings were initially attributed to mutations in the PRPH2 gene (also known as RDS), which provides instructions for making a protein called peripherin-2. This encoded protein is a cell surface glycoprotein found in the outer segment of both rod and cone photoreceptor cells. It may function as an adhesion molecule involved in stabilization and compaction of outer segment discs.[8] The PRPH2 gene is located on the short (p) arm of chromosome 6 at position 21.1.[2] Within the PRPH2 gene there are many missense mutations (Gly167Asp, Arg172Trp, Cys213Arg, Lys197Glu, Glu208Asp, Trp246Arg, Ser289Leu, Cys213Tyr,and Cys250Phe) and nonsense mutations (Gln239ter and Tyr285ter) that may give rise to pattern dystrophies.[9] [10] [11] [12] [13][14][2] In fact, over 90 different mutations may cause a variety of retinal disease phenotypes, including pattern dystrophy, cone and cone-rod dystrophy, and retinitis pigmentosa. Numerous other genes have since been implicated in causing similar pigmentary maculopathies, including ABCA4, BEST1, CTNNA1, and IMPG1.[15] 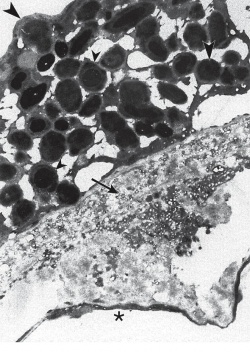 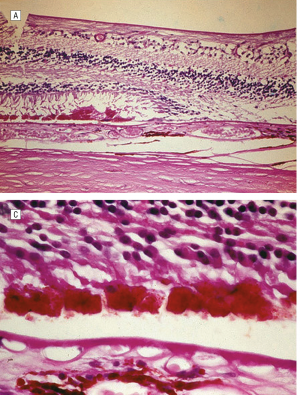 Pattern dystrophy is caused by lipofuscin accumulation in the RPE layer of the retina. Light and transmission electron microscopic examination shows loss of the RPE and photoreceptor cell layer, with intact choriocapillaris and lipofuscin-containing cells in the sub-retinal space in the macula. [2]

Little is known about the pathophysiology of the various pattern dystrophies. However reports have shown multiple cysteine mutations within the PRPH2 gene. The disulfide bond within proteins is believed to be held by cysteine and any interruption of that could disrupt the integrity of the photoreceptor disc membrane. This can lead to degeneration of photoreceptor cells and ultimately results in an accumulation of lipofuscin in the RPE.[2] [14]

The most common presenting symptoms are metamorphopsia and a slight decrease in vision. However since the symptoms are very mild, pattern dystrophies are often discovered on routine or unrelated eye exams. [16][5] Rarely, patients may present with abrupt vision loss due to development of choroidal neovascularization (CNV).

Diagnosis of pattern dystrophies is based on the pattern of pigment deposition in the RPE. Fluorescein angiography can be helpful depending on the pattern and severity of disease. Results of ERG may be normal while EOG may be abnormal, consistent with diffuse RPE atrophy. There are multiple genetic mutations that can cause pattern dystrophy and none can be diagnosed based on a certain pattern. Though various modalities may help with disease identification, pattern dystrophy remains a clinical diagnosis.[17] 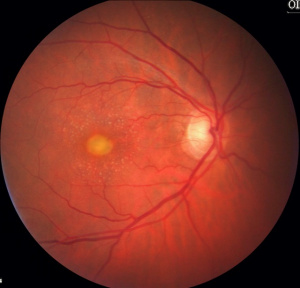 This is the most common pattern dystrophy and closely resembles Best disease though the lesions are generally smaller with diagnosis occurring in adulthood. It is characterized by bilateral, symmetrical, grayish-yellow, round or oval-shaped lesions within the macular area. These lesions are mildly elevated and are typically one-third to one-half disc diameter in size and contain a central pigmented spot.[5] [18] The vitelliform lesions are formed mainly by photoreceptor debris, possibly as the result of faulty phagocytosis by the RPE. Compounding this problem is the pigment liberated as the RPE undergoes disruption. [19] Fluorescein angiogram (FA) typically shows hypofluorescence in the area corresponding to the vitelliform lesion, with a ring of hyperfluorescence that increases in intensity in the late phases. Fundus autofluorescence reveals that the vitelliform lesion is hyperautofluorescent. 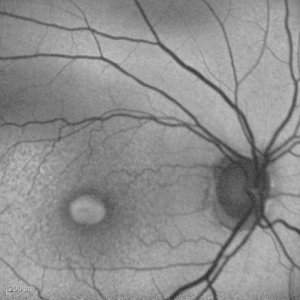 Patients with many basal laminar drusen may develop vitelliform exudative macular detachment. Subretinal yellowish fluid blocks the background fluorescence early with late staining on angiogram which can be mistaken for CNV (choroidal neovascularization).

Patients who have been misdiagnosed with CNV and have been treated with photodynamic therapy (PDT) or anti-vascular endothelial growth factor (VEGF) show no changes or slight improvement in visual acuity (VA). Subretinal vitelliform material may disappear after 1-3 months of PDT treatment.[20] Diagnosis of adult-onset vitelliform dystrophy remains clinical, as FA has been shown to demonstrate normal, focal, patchy, ring-like, and linear none of which correlates with visual acuity. [21][22]

OCT demonstrates the location of the yellowish material under the sensory retina and above the retinal pigment epithelium, corresponding angiographically to the late staining. Foveal thinning may be found on OCT especially as the vitelliform lesion resorbs and may correlate with progressive visual loss and even evolution toward a full-thickness macular hole.[23]

EOG is usually within normal range with no difference based on stage of the disease. [24]

This dystrophy is characterized by a bilateral accumulation of yellowish or pigmented material in a butterfly-like pattern at the level of the retinal pigment epithelium. This material is yellow, white, or black, and often accumulates in an usual configuration consisting of 3 to 5 'arms' or 'wings' that resemble the wings of a butterfly. The material is present in some patients in the second decade of life but affected individuals most commonly become symptomatic in their late twenties or early thirties [4]

In butterfly pattern dystrophy the central lesion is readily shown by FA, which helps to differentiate this condition from other macular pattern dystrophies. FA generally shows a large, hypofluorescent, butterfly-shaped macular lesion. Yellow flecks observed fundoscopically in the posterior pole are noted to block fluorescence. [2]

ERG is usually normal but may show some diffuse photoreceptor dysfunction with normal vision. Dark adaptation and color vision is normal. EOG changes in most cases have been found to be subnormal.[4]

Similar to all pattern dystrophies patients are asymptomatic when first diagnosed with BPD. They maintain normal vision in their twenties and thirties. However in their fifties and onward the disease can progress. When first described by Deutman et al it was not known if the disease was progressive due to only 3 years of follow up. However further research has shown that older individuals may exhibit atrophic, depigmented lesions that extend to the peripapillary region, with markedly reduced visual acuity. [27][28] 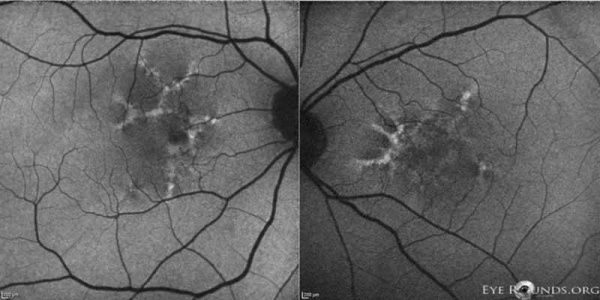 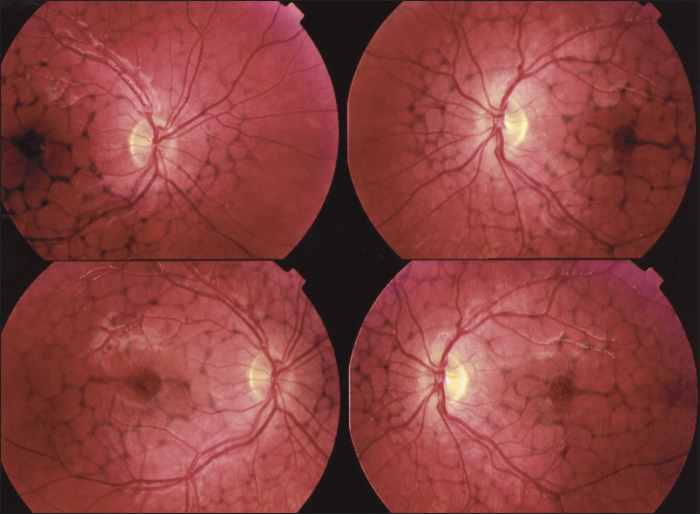 Symmetrical and reticular pattern of accumulated pigment in the fovea that radiates from the center to the periphery like a “fishnet with knots.” [29]

This dystrophy is characterized by a network of hyperpigmentation, resembling a fishing net with knots, located in the RPE and a presumed unaffected choriocapillaris. [30] The network of hyperpigmentation extends 4 to 5 disc diameters from the macula in all directions. Each net of meshes is typically 1 disc diameter or less. The midperiphery and periphery are unaffected early in the disease process. With age, most lesions fade away. However, some are replaced with atrophic changes in the RPE.[5] In the advanced stages, the network becomes bleached and irregular with small white dots appearing in the RPE.[28]

Fluorescein angiography demonstrates a mosaic pattern, showing hypofluorescent bands or segments surrounded by areas of non-leaking hyperfluorescence. This corresponds to the reticular bands of pigment epithelial hyperpigmentation surrounded by halos of hypopigmentation as seen with the ophthalmoscope. The choroidal vessels appear to be normal.

Dark adaptation testing has been reported as normal or subnormal.[28] ERG findings are typically normal. However, EOG findings may be normal or abnormal similar to butterfly dystrophy. Reticular dystrophy also has associated ocular findings outside the retina such as spherophakia with myopia and luxated lenses, partial atrophy of the iris, scleral staphyloma, convergent strabismus, and choroidal neovascularization.[4]

Multifocal pattern dystrophy simulating Stargardt disease is characterized by irregular yellow-white flecks scattered throughout the posterior pole resembling those found in Stargardt disease. The flecks are variable in size, shape and number and are often situated around the retinal vascular arcades, especially nasal and superior to the optic disc as well as in the macular area. Macular abnormalities may range from various patterns of yellow or grayish deposits to well-demarcated lesions of severe chorioretinal atrophy. [16] On fluorescein angiography, the flecks are hyperfluorescent in the early and late phase, sometimes with a central hypofluorescent spot. Important to note is that the characteristic dark choroid seen in Stargardt disease is absent. On fundus autofluorescence imaging, the flecks show increased autofluorescence, often with small adjacent zones of decreased autofluorescence. [16]

On OCT, some of the Stargardt‐like flecks appear as a highly reflective focal thickening of the hyper‐reflective outer red line (ORL), corresponding to the RPE/Bruch's membrane. Macular lesions show thickening of the ORL, with a variable increase in underlying reflectivity.[16]

Full‐field ERG results vary from normal to non‐recordable. Non‐recordable ERGs were mostly noted in patients with a confluence of the yellowish flecks. Similar to other pattern dystrophies EOG can be normal or subnormal. [16] 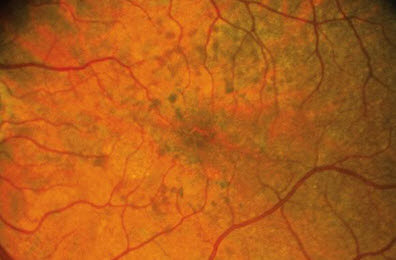 Fundus Pulverulentus. Coarse pigment mottling of the pigment epithelium in the macular area.[31]

This is the rarest of all pattern dystrophies. It is characterized by a granular appearance with coarse and punctiform mottling of the RPE within the macular region[32] Fluorescein angiography usually shows hypofluorescent spots corresponding to the pigment mottling. [33] This dystrophy can be easily confused with age-related macular degeneration (AMD) due to RPE mottling within the RPE. A misdiagnosis can cause unnecessary anxiety in a patient who would believe they have a more severe, progressive disease.

Pattern dystrophies may be associated with systemic diseases. Pseudoxanthoma elasticum has been seen in all pattern dystrophies with fundus pulverulentus being the most common.[34] Butterfly and reticular dystrophy have been shown to be associated with myotonic dystropy.[35] Maternally inherited diabetes and deafness (MIDD) has been shown to have a high correlation with pattern dystrophies in up to 85%.[36] Many other systemic associations may exist but it is difficult to identify them definitively since the visual acuity in most patients in previous studies has been fairly normal.

Due to its multiple presentations, the differential for pattern dystrophies is very large and includes:

There is no treatment for the accumulation of lipofuscin in the various pattern dystrophies. Fortunately, vision loss is slowly progressive compared to AMD. However, vision loss progresses more rapidly in some patients than in others. As there is no treatment to reverse vision loss, patients may benefits from low vision aids and therapy. Similar to AMD, treatment modalities are focused primarily on complications that may arise from the RPE degeneration with the most common yet infrequent one being CNV.

CNV arising from pattern dystrophies has been shown to be responsive to anti-VEGF therapy. Treatment with anti-VEGF therapy has shown to decrease macular edema and improve visual acuity. [37] Treatment of CNV with PDT should be considered with caution as vitilleform lesions treated with PDT without any components of CNV may have a negative impact on vision.[38][39]

Adult vitelliform dystrophy patients can develop macular holes due to degeneration of overlying outer retinal and photoreceptor layers. Treatment with vitrectomy has mostly been ineffective.

Patients should be reassured that their condition generally does not significantly affect their vision and is very slow to progress. Pattern dystrophies have previously been misdiagnosed as AMD, which has led to unnecessary emotional stress in patients concerned with impending vision loss and unnecessary treatments, such as vitamin supplements and anti-VEGF injections. Although these disease entities usually have minimal impact on vision, some patients may rarely develop CNV or macular holes due to RPE degeneration. Geographic atrophy may develop in the macula in patients over 60 and can affect central vision. However, most patients retain reasonable reading vision in one eye throughout life without the need for any treatment.