Figure 1. Retinal images from the left eye of an individual who demonstrated typical findings and evolution of NCMD over three decades of follow up. A, B, color and red-free fundus photographs, respectively, at age 6 years, when the patient’s visual acuity was 20/50 in each eye. C, D, Fluorescein angiography at age 6 years did not show active neovascularization. E, At age 8 years, this individual demonstrated a central fibrotic scar, which progressively worsened through age 10 years (F), which then relatively stabilized between 11 years (G) through 33 years (H). At 33 years, visual acuity was 20/60-1 in the right eye and 20/70-1 in the left eye. I, OCT of the left eye, which demonstrates severe outer retinal and retinal pigment epithelial degeneration involving the fovea. [1]

NCMD is an autosomal dominant, congenital, completely penetrant, non-progressive macular malformation first reported 50 years ago in a large family in North Carolina. This family’s retinal findings were initially described by Lefler, Wadsworth and Sidbury as “hereditary macular degeneration and amino-aciduria” and subsequently referred to as the Lefler Wadsworth Sidbury Syndrome.[2][3] The “aminoaciduria” component, was later found to be inconsistent making the “syndrome” a misnomer.[3] This same family was reported in a cross-sectional study 3 years later as “a new dominant progressive foveal dystrophy.” [3]

NCMD is a congenital developmental abnormality of the macula. Most affected individuals carry a mutation in noncoding DNA found on the MCDR1 locus of Chromosome 6. The implicated variants alter a DNase1 hypersensitivity binding site upstream of the PRDM13 gene, which is proposed to dysregulate the PRDM13 gene through altered chromatin assembly. [39] The PRDM13 gene product is a transcription factor expressed in developing neural retina, particularly in amacrine cells.[40] The MCDR3 locus on chromosome 5 has also separately been implicated in causing NCMD. At this locus in diseased individuals, Cirpriani et al have reported discovery of a duplicated region containing the IRX1 gene, whose product is also a developmental transcription factor not exclusive to the nervous system. [39] Although detailed mechanisms of macular degeneration as a result of these mutations remain unclear, one theory is that these mutations alter chromatin folding causing dysfunctional structural variants.

There is a great deal of variable expressivity in the appearance of affected maculae.  In general, the macular lesions are congenital and bilaterally symmetrical.  The appearance of the lesions range from central small/intermediate drusen (grade 1), to confluent drusen, to central vitelliform lesions (grade 2), to large central defects with atrophy that bow back into the choroid and sclera (grade 3), often with surrounding subretinal fibrosis (most likely from CNVM). Figure 1 demonstrates the appearance of typical macular lesions from an affected individual over three decades of follow up. [41]

Visual acuity is generally better than would be expected given the appearance of the lesions but has been reported to range from 20/20 to worse than 20/400. The visual acuity generally stabilizes throughout the patient’s lifetime unless the patient develops a CNVM in the area of fixation (typically slightly nasal to the fovea). Color vision is typically normal, which aids in differentiating NCMD from other inherited retinal disorders. 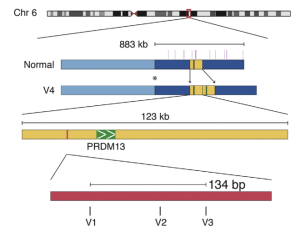 Figure 2. Gene variants on the MCDR1 locus (chromosome 6) that cause NCMD. Chromosomal segment marked with asterisk represents a genetic recombinant found in an unaffected individual. Variants V1, V2, and V3 fall within a DNase hypersensitivity site (red) upstream of the PRMD13 gene (green).[1] bp = base pairs

Because the macular lesions (grade 3 colobomatous-like) are typically centered slightly temporal to the macula, some patients may have the appearance of strabismus as they adjust fixation. Some affected families have shown “claw hand” malformations or hearing loss. Examining other family members can reveal the variable expressivity of involved mutations and can greatly facilitate diagnosis.

Known causative mutations of NCMD have been discovered in the MCDR1 locus on chromosome 6 (Figure 2) and the MCDR3 locus on chromosome 5. Clinical diagnosis can be confirmed with DNA sequencing for known mutations (see table below). It must be emphasized that failing to detect a known mutation does not exclude a diagnosis of NCMD. Of note, commercial labs offering genetic testing for inherited retinal disorders currently only detect mutations on the MCDR1 chromosome 6 locus and not on the MCDR3 chromosome 5 locus, which are more prevalent in the European population.  Clinical judgment should determine whether further specialized genetic testing, such as whole genome or exome sequencing should be pursued.

Electroretinography (ERG): full field ERG is typically normal.  This test is useful in distinguishing NCMD from other IRDs.  However, there is one report by Manes et al[36]  of an abnormality with the oscillatory potentials (OPs) electrooculography consistent with amacrine cell dysfunction.  However, “normative data” of OPs is lacking in the literature and what constitutes an abnormal OP recording is not well-established.

Electrooculogram (EOG) recordings, are typically normal although Small et al has reported several patients with an abnormally reduced Arden ratio with a normal ERG. The traditional teaching is that a normal ERG with an abnormal EOG suggests the diagnosis of Best Vitelliform Macular Dystrophy (BVMD).  This classic teaching does not account for the same finding in some patients with NCMD.

Periodic monitoring for the development of CNVMs.  Studies have demonstrated that anti-VEGF injections work well to address complications from CNVM in NCMD.[43]

Prior to the development of intravitreal anti-VEGF injections, submacular surgery was rarely performed. For patients with macular lesions affecting fixation with resultant appearance of strabismus, strabismus surgery has not been reported to have much success in improving visual function or appearance.

The development of CNVMs can cause progressive vision loss.

Prognosis is generally good for maintaining useful and stable vision throughout the life of the patient.  Even patients with severe appearing grade 3 colobomatous-like lesions can maintain 20/40 visual acuity.