Doyne Honeycomb Retinal Dystrophy, also known as Malattia Leventinese or Familial Dominant Drusen, all refer to the same genetic inherited retinal dystrophy characterized by an autosomal dominant mutation in the EFEMP1 gene in which patients develop early onset macular and peripapillary drusen that are often oriented radially, initially described as a "Honeycomb" pattern by Doyne in 1899.

Doyne Honeycomb Retinal Dystrophy (DHRD) was first described phenotypically by Doyne in 1899 in four sisters in England[1]. He found that each had an early onset retinal dystrophy with closely grouped white lesions in the macula and disc area which he termed "Honeycomb" pattern. Vogt in 1925 then described a similar phenotypic picture in a cluster of likely related individuals in the Leventine Valley of Switzerland, thus spawning the name Malattia Leventinese (MLVT) [2]. Ophthalmologists did suspect for a period of time that the two separately described entities likely referenced the same disease given their similarities, and in 1996 both DHRD and MLVT were mapped to abnormalities in chromosome 2, first by Heon in patients with MLVT[3], then by Gregory shortly after for patients with DHRD[4]. Even in light of this discovery in 1996, it was still thought that the two diseases may represent separate entities.

However in 1999, Stone et al.[5] identified a single mutation in the EFEMP1 gene on chromosome 2 in both families with DHRD and MLVT, confirming that the two represented slight phenotypic variances of the same disease, and thus we now consider them to be the same clinical entity.

Since Doyne Honeycomb Retinal Dystrophy results from an autosomal dominant mutation in the EFEMP1 gene, having an affected family member is the only identifiable risk factor

EFEMP1 stands for EGF-containing fibulin-like extracellular matrix protein 1, and the gene coding for it lies on chromosome 2p16.

Normally, EFEMP1 is widely expressed in the extracellular matrix, however, its exact function is unknown.

Fu et al. 2007 proved the EFEMP1 mutation to be pathological by showing EFEMP1 R345W knock in mice develop deposits between Bruch's membrane and retinal pigment epithelium (RPE). They stated that the deposits may contain increased amounts of mutated EFEMP1 proteins as well as TIMP3 protein, and that this may lead to basal deposit formation. Their research also showed that R345W knock in mice demonstrated evidence of alterations in RPE cell ultrastructure, and that basal deposits and alterations in RPE cell ultrastructure were associated with increased with increased levels of C3 compliment activation[6].

Tsai et al. 2021 compared induced pluripotent stem cells (iPSC)-derived RPEs from individuals with DHRD to their controls. There was a significant down-regulation of carboxyl esterase 1 (CES1), an enzyme responsible for exporting cholesterol by turning the ester into free cholesterol. The known mutation EFEMP1 R345W in DHRD may have a hyper-inhibitory effect on EGFR signaling and suppress CES1. This decreased ability to mediate cholesterol efflux could result in the lipid accumulation found in drusen in AMD.[7]

Diagnosis of Doyne Honeycomb Retinal Dystrophy is made clinically and must be confirmed with genetic testing to prove a EFEMP1 mutation.

While there have been reports of disease onset in children and elderly, patients are usually asymptomatic early in the course of disease, with most not experiencing symptoms until the 4th and 5th decade of life. Patients may describe an initial insidious onset of visual disturbances such as blurry vision, photopsias, scotomas, metamorphopsias, and dyschromatopsias. In advanced stages, in the 7th and 8th decades of life, central vision is involved, and visual acuity can be worse than 20/200. Such visual changes are associated with the appearance of drusen between the Bruch membrane and RPE, that initially present as small accumulations and progress to the honeycomb pattern. Large differences in severity and progression can be seen between eyes of the same patient [8][9], as well as between patients in the same family[9]. Early onset drusen appear in a radial distribution centered on the macula, as well as the optic disk margin. More advanced and later onset disease presents with central vision loss depending on the presence or absence of choroidal neovascular membranes (CNVM) and geographic atrophy[10].

The disease is typically characterized by early-onset drusenoid deposits presenting at the posterior pole, peripapillary area, center of the macula, and along vascular arcades. The deposits are characteristically described as multiple "radially elongated" or "honeycomb pattern" small drusen in early stages, but can become indistinguishable from deposits in advanced AMD in later stages as they become larger and more confluent. Involvement nasal to optic disc is a typical feature. Pigmentary changes often occur as the disease progresses . CNVM can form, with subsequent scarring, and in advanced stages geographic atrophy can occur in the areas of confluent drusen. Early stages may have bilateral symmetric basal laminar drusen. 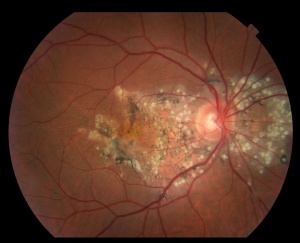 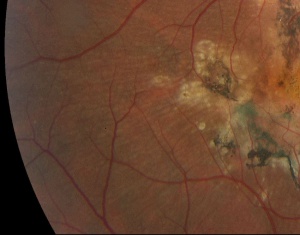 Notice the radially elongated drusen temporally that is characteristic of DHRD - Courtesy of Dr. Marc Mathias

Spectral domain optical coherence tomography (SD-OCT) imaging can reveal focal dome-shaped, saw-tooth, or diffuse hyperreflective deposits with elevation between the RPE and Bruch's membrane, usually becoming more confluent over time[11]. Early in disease, the outer retina (photoreceptors) may remain intact, but later stages can show variable or diffuse ellipsoid zone loss, as well as outer and inner segment disruption. OCT can also reveal hypo-reflective fluid from a corresponding neovascular membrane. Diffuse retinal atrophy can be seen in later stages, however outer retinal changes are not often seen outside of areas with sub-RPE changes[12].

OCT of the same patient, showing drusenoid deposits between the RPE and Bruch's, with areas of overlying outer retinal atrophy. Courtesy of Dr. Marc Mathias

Fluoroscein angiography (FA) can reveal presence of CNVM with leakage, and large drusen are typically hyper-fluorescent in late stages[11]. Variable hypo or hyperfluorescence can be seen in areas of pigmentary changes, atrophy, and scarring. Indocyanine green angiography (ICG) can also be used to differentiate between two types of drusen. This imaging modality has shown different patterns of staining between large central drusen and small radial drusen. Large central drusen initially present as hypofluorescent, and then become hyperfluorescent spots surrounded by halos of hypofluorescence in the late phases. Small radial drusen on the other hand, present with hyperfluorescence in early phases and decreased fluorescence in late phases. [14]

OCT-A is also a useful imaging modality that can be used in visualization of DHRD. Choriocapillaris segmentation of OCT-A in DHRD patients has shown a hyperflow signal corresponding to active choroidal neovascularization. [15]

Patients with suspected DHRD or any early onset maculopathy should be considered for genetic testing, which can confirm mutation of the EFEMP1 gene. There are several commercially available genetic tests for inherited retinal diseases and dystrophies. A list of these tests can be found via the NCBI genetic testing registry below.

Differential diagnosis of any patient with early-onset drusen should include any of the hereditary maculopathies and pattern dystrophies:

Currently, there is no genetic or targeted therapies to correct the underlying EFEMP1 genetic mutation in DHRD.

Typically, patients with DHRD are managed conservatively with observation, unless a CNVM develops.

In Cusumano, et al. 2019, sub-threshold nanolaser treatment was performed in a patient with DHRD demonstrating visual acuity and multifocal electroretinogram improvement at the 2 and 6 month mark.[21]

Patients with a confirmed EFEMP1 mutation should have their children screened for involvement.

We recommend annual follow up with OCT imaging in patients without CNVM.

Prognosis is variable, not only between patients but also between the eyes of the same patient. Central visual acuity can be excellent, but generally worsens with age, with vision less than 20/200 in the 7th and 8th decades of life not being uncommon in some cases.