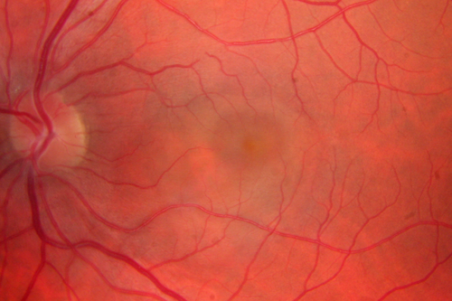 41 year old with serous retinal detachment OS and sudden vision loss associated with a viral prodrome. Vision improved in about 2 months without therapy.[1]

Acute Idiopathic Maculopathy is an uncommon disease of the retinal pigment epithelium that affects young adults. [2]It presents as a sudden, severe unilateral central vision loss most commonly following a flulike illness. [3]

Unilateral Acute Idiopathic Maculopathy (UAIM) was first described as a syndrome by Yannuzzi, et al in 1991.[3] His report consisted of nine young patients who developed significant unilateral vision loss (20/200 or worse) associated with a characteristic exudative detachment of the macula with grayish thickening of the underlying retinal pigment epithelium (RPE). Patients experienced spontaneous resolution of their symptoms over the course of several days to weeks with near complete recovery of vision, a “bulls-eye” appearance in the macula persisted. [3][4] While his report discussed unilateral vision loss, bilateral disease has been reported as well leading some to propose renaming the disease Acute Idiopathic Maculopathy (AIM). [4]

Maculopathy is a pathologic condition of the macula, which is the centermost part of the retina and is responsible for highly sensitive vision. Medications linked to maculopathy have been found to disrupt metabolic functions of the RPE and photoreceptors. AIM is a different entity as there is not currently an associated cause linked to its onset. 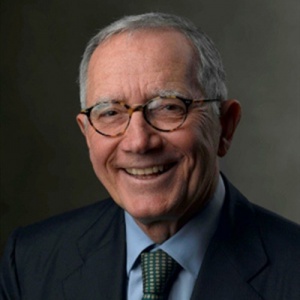 Lawrence A. Yannuzzi, MD, founder of the Vitreous Retina Macula Consultants of New York and the first to describe Unilateral Acute Idiopathic Maculopathy. [5]

AIM by definition is not linked to an underlying disease process or known cause. It notably affects younger Caucasian individuals and it appears to split equally between sexes. A preceding flu-like illness has been reported in several cases and elevated Coxsackie Virus titers were reported in a patient presenting with bilateral disease. [4]  . AIM has been described in a 59 year old patient, 30 days after developing with yellow fever disease. [6] Another report has linked AIM after H1N1 vaccination in a 25 year old Caucasian patient. [7] While vision loss at onset is severe and abrupt in nature, spontaneous resolution and recovery of vision is expected.

The mechanism of AIM is not fully understood, although it is thought to contain an inflammatory component. Initially an irregular neurosensory retinal detachment overlying a smaller, grayish thickening at the level of the retinal pigment epithelium is seen. Some patients have been reported to have a few intraretinal hemorrhages and some may have inflammatory cells in the posterior vitreous.[8] In 1996, Freund, et al expanded the clinical spectrum of the maculopathy described by Yannuzzi, et al. Their report included an additional 17 patients that presented with new features of this disease. Initially, the it was reported to present unilaterally and associated with a viral prodromal illness. This report demonstrated a bilateral disease course and also showed links to pregnancy. Human immunodeficiency virus has also been implicated.[4] Other findings included papillitis and eccentric macular lesions. The papillitis occurred as both a primary disease and as an extension of the maculopathy, and the four patients presenting with eccentric macular lesions had better visual acuity than typical for AIM owing to the extrafoveal nature of their disease. The intraretinal hemorrhages observed in some acute lesions are thought to be secondary to venous stasis produced by optic nerve inflammation or by concomitant phlebitis. Subretinal exudation was noted in two patients and was thought to represent subretinal inflammatory cells or debris. These findings did not alter the disease course. [8]

Acute Idiopathic Maculopathy classically presents as an abrupt, severe loss in vision (visual acuity 20/200 or worse) in one or both eyes in young, otherwise health individuals. Patients can also report a history of a flulike illness preceding the onset of vision loss. Links to Coxsackie virus have been established, and an association with pregnancy (one case in the first trimester and one four weeks postpartum) has been observed. [8]

Examination of the posterior pole is achieved through slit-lamp biomicroscopy and indirect ophthalmoscopy with use of the appropriate lenses.

Classically, an exudative retinal detachment of the macula is observed on exam. This finding may be unilateral or bilateral. Some patients may also have papillitis or intraretinal hemorrhages as described above. 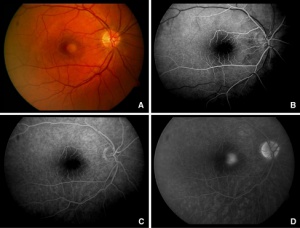 The diagnosis of this disease is clinical and supported by ancillary testing including Optical Coherence Tomography (OCT) and Fluorescein Angiography (FA). 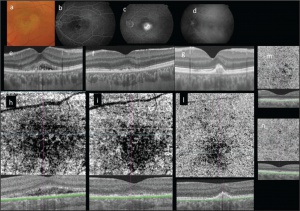 [10]Photographs of the left eye of a patient with unilateral acute idiopathic maculopathy (UAIM) at the initial visit (A–E, H), after 4 days (F, I) and at 1 month (G, L). (A) Fundus photograph showing a yellowish lesion with an orange/dark core in the left macula. (B, C) Fluorescein angiography showing central hypofluorescence with surrounding faint, ring-shaped hyperfluorescence in the initial phase (B) and marked leakages and pooling of the dye within the subretinal space in the late phase (C). (D) Indocyanine green angiography showing a hypofluorescent lesion with some hyperfluorescence in the mid-late phase. (E) Swept-source optical coherence tomography (SS-OCT) at the initial visit (E) showing neurosensory detachment of the retina with thickening of the outer retina due to disruption and irregularity of the photoreceptor outer segment. At 4 days (F), imaging showed partial resolution of the neurosensory detachment with a better delineation of the outer retina layers. (C) At 1 month (G), showed a complete resolution of the neurosensory detachment with gradual improvement of the outer retinal layers and a juxtafoveal focal retinal pigment epithelial detachment containing hyporeflective material. SS-OCT angiography photographs taken at the level of the choriocapillaris segmentation line in the study (H, I, L), fellow (M), and control healthy (N) eyes. (H, I) Photographs showing the dark pattern and the progressive reduction compared to the normal “white noise” effect of the fellow (M) and control healthy (N) eye.

In the acute phase of maculopathy spectral-domain OCT (SD-OCT) and STRATUSOCT show abnormal heterogeneous hyperreflective thickening at the level of the outer retina and RPE in the foveal region. Hyporeflective exudation and subretinal fluid with detachment and disruption of photoreceptor outer segment can also be seen. [11][12] Swept- Source Ocular Coherence Tomography (SS-OCT) demonstrates similar findings. Upon resolution of the disease, the neurosensory detachment often resolves completely, however, patients may develop a focal submacular scar with persistent metamorphopsia. [11] Choroidal neovascular membranes (CNV) can be seen as a complication of AIM.[13]

A case report using Swept-Source Ocular Coherence Tomography Angiography demonstrated early irregular hyperfluourescence and hypofluorescence at the level of the retinal pigment epithelial lesion, followed by complete staining of the overlying neurosensory retinal detachment in the late phase of the study.  The superficial and deep layers of the retinal capillary plexus were preserved and a dark pattern at the choriocapillaris segmentation line was observed when compared to the right eye.[11]

Indocyanine green angiography shows a hypofluorescent lesion with some hyperfluorescence in the mid-late phase.

Coxsackie Virus titers may be obtained as these have been elevated in patients at time of diagnosis.

The differential diagnosis of Acute Idiopathic Maculopathy includes diseases that present with a focal area of subretinal fluid (SRF) leading to profound central vision loss. Central Serous Retinopathy, Harada Syndrome and APMPEE are included in the differential and can generally be excluded by their FA findings.  The possible relationship between AIM and APMPPE has been suggested due to the overlap of many common features including the rapid onset and resolution of symptoms and the following of a prodromal flu-like illness. [3][14] Also, the various macular dystrophies should be considered, however, the progressive loss of vision and pigmentary changes associated with SRF can help distinguish them from AIM.

Historically, AIM has been misdiagnosed and interventions such as photodynamic therapy, systemic corticosteroids and intravitreal triamcinalone have been prescribed.[14] No treatment has been proven to work; it is a self-limiting condition. Patients presumed to have AIM should be observed clinically and with ancillary testing for spontaneous resolution. Viral serology may be obtained to identify an underlying cause.

No medical therapy is indicated as the maculopathy resolves on its own over the course of several days to weeks.

Patients should be followed with serial fundus examination and OCT until resolution has occurred.

The overall prognosis for this disease is favorable as most patients achieve full visual recovery upon resolution of the maculopathy.