This article presents a comprehensive review of a rare syndrome with distinctive retinal findings. Idiopathic retinal vasculitis, aneurysms, and neuroretinitis or IRVAN syndrome was first described in 1995 although case reports have been published since the 70s. This article is dedicated to all readers, especially our patients, who do not have easily access to scientific literature. The latest technique to study this disease, optical coherence tomography angiography of the retina, will be available for very first time to Eye Wiki users.

IRVAN is a subtype of retinal vasculitis. As such, it is recognized by the following codes as per the International Classification of Diseases (ICD) nomenclature[3]: 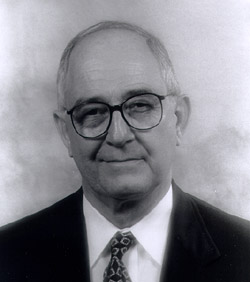 Idiopathic retinal vasculitis, aneurysms, and neuroretinitis (IRVAN) syndrome is a rare clinical entity of unknown etiology. IRVAN syndrome is one of the contributions to Ophthalmology of J. Donald M. Gass, MD [4]( Figure 1 )

Patients with IRVAN usually present with decreased visual acuity in one or both eyes[12]. They may have a variable number of cells in the anterior chamber and the vitreous.

Disc neovascularization may be observed in severe and advanced cases of IRVAN, with peripheral capillary dropout. Vitreous hemorrhage can result from retinal neovascularization. Non-complicated cases may have a slight swelling of the optic nerve head, highlighted in late phases of fluorescein angiography. Some authors think there is no true neuroretinitis, and leakage occurs from the aneurysms on the optic nerve head and periarterial lipid exudation results from retinal artery aneurysms. 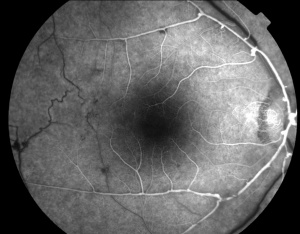 Retinal vascular sheathing may occur, but it is not a prominent feature of the disorder in most patients. ( Figure 3 ) In the retinal periphery, there is a variable amount of retinal nonperfusion, with obliteration of the arteries, veins, and retinal capillaries. In the perfused area bordering the peripheral areas of nonperfusion, the retinal veins may show abnormal caliber alterations. If the ischemic load of the nonperfused retina reaches a critical level, retinal and iris neovascularization may develop. Interestingly , neo-vessels may sometimes reproduce arterial macroaneurysms seen in the retinal vasculature ( Richard F Spaide MD, personal communication ). In severely affected individuals, vitreous hemorrhage and neovascular glaucoma have developed.[13]

Although lipid deposition is not common in most patients with uveitis, patients with IRVAN frequently have marked intraretinal lipid deposition. This lipid is usually found in the peripapillary region and may extend into the macula leaving a macular star or massive lipid accumulation . The lipid is generally found near the greatest concentration of aneurysms ( peripapillary location and along the arcades ) . The retina in these areas is commonly edematous and may be detached by exudative fluid. As time goes by, a fibrous grayish macular scar may develop as a legacy of long-standing exudation in the macula.[10] 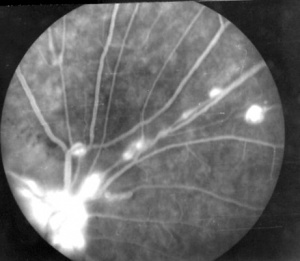 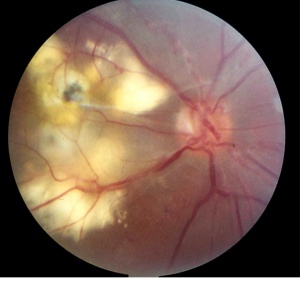 In 1973, Karel I. et al. published one case correspondent to a 15 year-old girl, in a series of pediatric uveitis, who matched the typical findings showed much later in IRVAN’s syndrome.[14] In 1978, Verdaguer T. presented, at a national conference, two otherwise healthy subjects who presented multiple arterial aneurysms from optic nerve up to mid-periphery ( Figure 4 ). He described a 20 year-old female with numerous aneurysmal dilatations within the arterial tree and marked lipid accumulation in both maculas and a 32 year-old man who had a gliotic macular scar secondary to a long-standing exudation in his macula. This author certified the leakage from retinal aneurysms by fluorescein angiography and stated that “ this disease as an independent entity” [15]( Figure 5 )

In 1983, Kincaid and Schatz described a bilateral inflammatory eye disease associated with multiple retinal aneurysms[16]. Since then, only few reports [17][18]were added to the scientific literature with no evidence of any concomitant systemic disease [19]and, relatively, a good visual prognosis.

In 1995 , Chang et al [1]first described the largest series of ten patients, ranging from 7 through 44 years of age, who met the criteria for a new retinal syndrome ( presence of retinal vasculitis, multiple aneurysms, and neuroretinitis not associated with any systemic abnormalities ) So, the authors proposed the acronym IRVAN to highlight the most prominent clinical features of this syndrome ( Idiopathic Retinal Vasculitis, Aneurysms and Neuro-retinitis ) . This report was presented at the ARVO Annual Meeting and published by the Retinal Vasculitis Study Group led by J. Donald M.Gass.

In 2007, Samuel et al[2] made new observations on the follow up of these originally described patients and adding twelve more subjects. Although IRVAN syndrome was believed to be a benign condition, they found and clarified that it can lead to a severe visual loss.

They also proposed a staging classification based on retinal ischemia status and established that an early panretinal laser photocoagulation should be considered when angiographic evidence of retinal nonperfusion is present. The latter was considered the first line of treatment until now. IRVAN word stood for Idiopathic Retinitis, Vasculitis, Aneurysms, and Neuroretinitis, a small variation from the original acronym.

Finally, between 2009 through 2011 , Soheilian [6]and Nourinia[7] have found some patients affected by IRVAN syndrome, have positive perinuclear antineutrophil cytoplasmic antibody levels ( P-ANCA ) on systemic workup . Thus, IRVAN syndrome may be retinal manifestation of a P-ANCA associated systemic vasculitis. 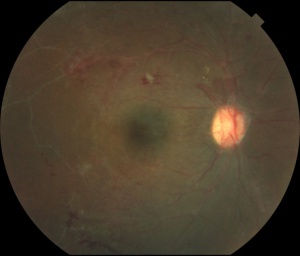 For instance , multiple visits for a change of glasses due to blurred vision.

Patients with IRVAN are , sometimes, over investigated for systemic causes of retinal disease. However, IRVAN seems to produce only ophthalmic manifestations, with general workup being mostly unremarkable. Retinal imaging is a key element for a rapid diagnosis of IRVAN[20], and a multimodal imaging approach is recommended when this syndrome is suspected, to collect all possible diagnostic criteria. Dye-mediated angiographies ( fluorescein and indocyanine green[21] ) remain the standard imaging modalities for confirming clinical diagnosis of IRVAN.[22] The aneurysmal dilatations showed uniform staining. No abnormalities were seen in the choroidal vessels; in particular, no aneurysms of the choroidal vessels have been observed. For example, the retinal abnormalities and macroaneurysms in IRVAN are more clearly imaged with ICG angiography, especially at the very late stages, but the leakage, ischemia, and retinal neovascularization are still best delineated with FA.[24] ( Figure 8 ) Figure 9 : Structural OCT B scan : Macular edema and epiretinal membrane in a patient with IRVAN syndrome.

It is useful to assess macular edema , vitreoretinal traction over both the macula and optic nerve head , neovascular tufts in posterior pole and epiretinal membrane , as an example[25] [26]( Figure 9 ).

OCT-A is a dye-free, noncontact modality to image the eye. It is a noninvasive imaging modality that provides three-dimensional images of the retina and choroidal microvasculature in vivo.

Some videos will be shown using a SS-OCT-A device available for research purposes only and FDA approved in United States for this reason.

There are no specific tests for diagnosing IRVAN.

At presentation, the physician must distinguish clinical elements of this interesting disease : arterial macroaneurysms , lipid exudation , retinal periphery capillary dropouts and neovascularization. [5]The syndrome’s striking ophthalmoscopic picture is not shared by any other disease.[9] However, four principal conditions may be diagnosed initially. The first is idiopathic retinal vasculitis[27], if the aneurysmal dilations are not noticed. Careful ophthalmoscopic and fluorescein angiographic examination should reveal any aneurysmal dilations, if present. The second is senile retinal arterial macroaneurysm. This acquired macroaneurysm is usually found in older patients with a history of high blood pressure and/or cardiovascular diseases[9][5]. It usually is single, mostly unilateral, located temporal to the optic nerve along the midsegment of an artery, and associated with hemorrhage. Although there may be capillary telangiectasis surrounding the macroaneurysm, there is no peripheral nonperfusion or signs of inflammation. Patients with IRVAN are otherwise healthy young people and arterial macroaneurysms are bilateral and multiple.The third element in the differential diagnosis is Coats´ disease[5]. Patients with Coats’ disease have a unilateral presentation with no signs of intraocular inflammation. The aneurysms of Coats’ disease usually involve more than one element of the vascular circuit and may involve the arteries, capillaries, and veins. The aneurysms in Coats’ disease do not involve arterial bifurcations and they are observed in the mid and far periphery usually surrounded by abundant circinate lipid exudation. Finally , peripheral telangiectasias are irregular in shape compared to aneurysms. The fourth condition is Eales´ disease.[9] Peripheral retina non-perfusion is almost always present with retinal neovascularization and sometimes arising from the optic disc. Nevertheless, it is not possible to observe typical fusiform or "tied-knot " arterial aneurysms from IRVAN syndrome.

Currently , retinal laser photocoagulation and the use of intravitreal injections of anti-vascular endothelial grow factor antibodies (anti-VEGF ) are considered within the first line of treatment. Interestingly, arterial macroaneurysms may regress or vanish after treatment or during follow-up.[28][29][30][31]

Patients affected with IRVAN have been treated with corticosteroids in an attempt to reduce any inflammatory worsening of their ophthalmoscopic appearance. Unfortunately, corticosteroids have not been particularly useful. Although corticosteroids undoubtedly decrease inflammation, much of the morbidity of IRVAN results from chronic secondary changes such as persistent leakage from the aneurysms and vitreous hemorrhage from the neovascularization.

Pegaptanib ( MACUGEN )[37] , Bevacizumab ( AVASTIN ) [38], Ranibizumab ( LUCENTIS )[39] and Aflibercept ( EYLEA ) have been used for treating IRVAN syndrome in patients with macular edema , retinal ischemia and neovascularization of the eye.

Cheema et al [40]showed improvement in two patients treated with infliximab, an anti-TNF. TNFα might be a causative factor in mediating inflammation and causing tissue destruction in IRVAN patients. Saatci et al used oral azathioprine as an adjuvant in a patient with IRVAN.[41]

Follow-up depends on the clinical condition. IRVAN patients should be followed at least every 3 months until stabilization.[42]

Focal laser treatment to the macroaneurysms may decrease the amount of lipid exudation, but carries the risk of causing focal occlusion of the retinal arteriole, thus its use is controversial[43]. Laser spots may be applied surrounding macroaneurysms areas but never directly. Laser-induced arteriolar occlusion has caused in some patients to lose substantial visual acuity[44].Panretinal photocoagulation to the peripheral areas of nonperfusion is performed in patients even before retinal / optic disc neovascularization appear. Several laser sessions may be required for each eye. The aim of this treatment is causing a regression of the new vessels. Some patients with substantial amounts of vitreous hemorrhage have required vitrectomy and laser endophotocoagulation to treat bleeding areas of retinal neovascularization. Although retinal and vitreous hemorrhages occur from typical senile retinal arterial macroaneurysms, bleeding from the aneurysmal dilations of IRVAN is not common.

Some authors have used this procedure, especially when opaque media is present and peripheral laser treatment cannot be applied. 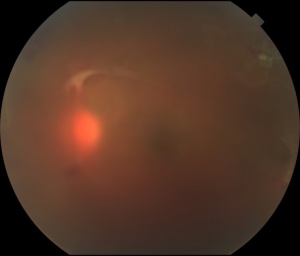 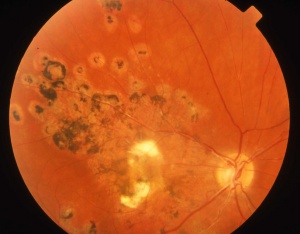 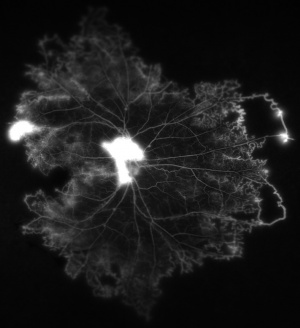 Variable. Visual prognosis of IRVAN may vary depending on the development of related complications[50].