A symptomatic retinal artery occlusion is an ophthalmic emergency that requires immediate evaluation and transfer to a stroke center. It is an obstruction of retinal blood flow that may be due to an embolus causing occlusion or thrombus formation, vasculitis causing retinal vasculature inflammation, traumatic vessel wall damage, or spasm. The lack of oxygen delivery to the retina during the blockage often results in severe vision loss in the area of ischemic retina. Patients often have concurrent silent ischemic stroke.[1] There are no evidence based treatments that have been demonstrated to have visual benefit, and a 2015 meta-analysis of fibrinolysis suggests that many interventions may be harmful or even fatal.[2] 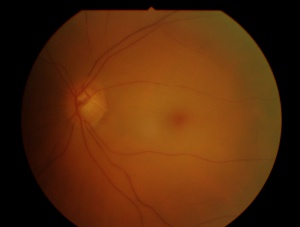 The blood-flow through any of these vessels may be disrupted during a retinal artery occlusion. Blackage may be caused by emboli, vasculitis, or spasms. Occlusion of the ophthalmic artery is often due to giant cell arteritis, while occlusion of the cilioretinal artery may be secondary to a central retinal vein occlusion, due to increased outflow resistance.

The risk factors and demographics of retinal artery occlusion are similar to ischemic stroke and include several modifiable risk factors:

Obstruction of the retinal vascular lumen by an embolus, thrombus or inflammatory/ traumatic vessel wall damage or spasm. Giant cell arteritis may also be associated with this condition.

In branch retinal artery occlusion, only part of the retina is involved. The area of retina affected by the occluded vessels is associated with the area and degree of visual loss.

In contrast, ophthalmic artery artery occlusion results in ischemia of both the inner and outer retina. This results in very severe loss of vision, often resulting in no light perception.

The most important risk factor to manage is giant cell arteritis. Patients who are suspected to have ophthalmic artery occlusion secondary to giant cell arteritis should be started immediately on corticosteroids and continued for six to twelve months. A temporal artery biopsy may be performed 2 weeks after initiation of steroids and some authors have found positive biopsy results 4 weeks after steroid initiation.[5] Starting steroids in patients under the age of 50 years, in African-american patients, or patients with elevated ESR in the setting of chronic kidney disease may not be clinically indicated. A new agent, tocilizumab, may reduce the amount of time that patients need to be treated with corticosteroids.

Patients typically describe sudden, painless, vision loss that occurs over seconds. Visual acuity may vary depending on the location of the obstruction. Complete vision loss to no light perception should raise suspicion of an ophthalmic artery occlusion. Patients with central retinal artery occlusion (CRAO) complain of visual loss over the entire field of vision, while those with a branch retinal artery occlusion (BRAO) complain of hemifield defect A patient with cilioretinal artery sparing may have 20/20 vision. Visual loss may have been preceded by transient loss of vision in the past (amaurosis fugax) in the case of embolic sources.

Sudden vision loss in a patient older than 50 years of age should immediately raise suspicion for Giant Cell Arteritis. Urgent systemic steroids may be needed to preserve vision in the affected eye and prevent vision loss in the unaffected eye (PPP strong recommendation). [6] Diabetic patients may need close follow-up as steroids will cause hyperglycemia.

Early in the course, the fundus may appear normal.

In central retinal artery occlusion, the classic findings of retinal whitening and a cherry red spot are due to opacification of the nerve fiber layer as it becomes edematous from ischemia. The fovea is cherry red because it has no overlying nerve fiber layer. This finding may take hours to develop, and the edema is associated with a worse visual prognosis. Over the course of about a month, the inner retina becomes atrophic as the swelling resolves.

Examination of the retinal blood vessels shows segmental blood flow, classically described as boxcarring. This is best appreciated with slit-lamp biomicroscopy. Over about the course of a week, the vessels reperfuse. 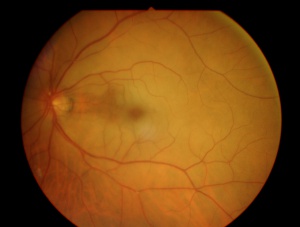 Acutely, diagnosis is prompted by the sudden onset of visual acuity loss and the presence of retinal whitening. There is a corresponding field defect. The affected blood vessel shows sluggish blood-flow (boxcarring of the blood column). There may be a refractile lesion within the blood vessel (Hollenhorst plaque- cholesterol), a whitish lesion within a section of the blood vessel usually at branching (platelet-fibrin ) or large calcific plaque (cardiac valvular disease). The arteries are thinned. Veins may be thinned, slightly dilated or normal.

Optical coherence tomography reveals hyperreflectivity of the inner retina in acute stages. The amount of retinal edema is related to visual prognosis.[7] Over the course of about 1 month, the inner retinal becomes atrophic and thins.

Fluorescein angiography shows a delay in the filling of the retinal arteries and a delayed arteriovenous transit time in the affected areas. The flow of blood in retinal arteries are very sluggish. The front edge of fluorescein (an arterial dye front-the angiographic feature with highest specificity) is seen to travel very slowly to the peripheral retina along the branches of retinal arteries. Complete lack of filling of the retinal vessels is very rare. Delayed choroidal filling should point to an ophthalmic or carotid artery obstruction. Over time, the vessels re-open and flow reverts to normal, despite the persistence of retinal vessel narrowing. When retinal circulation re-establishes, the retinal fluorescein angiogram may be unremarkable, despite clinically pale retina, and cherry red spot, especially in cases where no emboli or boxcarring is clinically visible.

Poor perfusion of the arterial tree can be demonstrated by the ability to induce retinal pulsations in the central retinal artery by digital pressure on the eyeball (ophthaldynomometry). 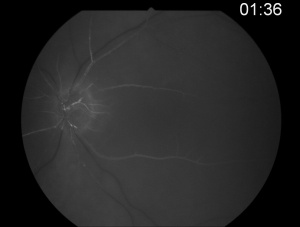 Electroretinography, ERG, shows a characteristic diminution of the b-wave. This is due to inner retinal ischemia. The ERG may be normal in some cases (despite poor visual acuity) if the blood flow renormalizes.

An erythrocyte sedimentation rate (ESR), C-reactive protein (CRP), and complete blood count (CBC) with platelets should be obtained in patients over the age of 50 who have symptoms of giant cell arteritis (PPP Strong recommendation).[6]

Patients younger than 50 should have a hypercoagulable workup including antiphospholipid antibody syndrome, autoimmune conditions, inflammatory disorders, and other hypercoagulable states (PPP strong recommendation).[6] In a young patient with multiple or recurrent BRAOs, Susac syndrome should be considered.

In older individuals, atherosclerosis and emoboli are the most likely cause of the ischemia. Evaluation of the heart with echocardiography should be performed to determine cardiac function and abnormalities of the valves. Electrocardiograms and heart monitoring may reveal a rhythm defect. Cartotid artery stenosis should be evaluated with carotid ultrasound (PPP strong recommendation)[6]

Central retinal artery occlusion has retinal artery boxcarring and whitening in all four quandrants, with vision usually between 20/200 and hand motion

Ophthalmic artery occlusion has both retinal artery findings as well as choroidal vascular nonperfusion. Vision is often no light perception. There is no cherry red spot as the choroidal perfusion is also occluded.

Ocular ischemic syndrome may present with transient symptoms of vision loss. There may be conjunctival injection and neovascularization of the anterior and posterior segment, with inflammation in the anterior chamber or vitritis. Optic nerve edema and retinal hemorrhages are often seen as well. Carotid disease is the most common cause.

Retinal artery occlusion is an eye emergency. Patients should be referred to the nearest stroke center for further immediate management.

There are no evidence based therapies that have demonstrated efficacy in improving visual outcomes, and a meta-study has suggested that some therapies may be worse than the natural course.[2] Some of these are described below.

Clot busting tissue plasminogen activator (tPA) was evaluated in the EAGLE study, which was a randomized controlled trial comparing intra-arterial fibrinolysis to placebo. The study did not recommend intra-arterial tPA for acute CRAO because of significant symptomatic intracranial hemorrhage without evidence of visual benefit.[8] The trial was terminated early due to the adverse effects of tPA.

A randomized controlled trial comparing intravenous tPA to placebo did not show improved short term visual benefit when given within 6 hours, but this was not sustained. [9] There was no long term visual benefit and intracranial hemorrhage was an adverse reaction noted in this small study. Although recent meta-analysis of observation studies suggest that there may be mild benefit to intravenous tPA when given within 4.5 hours, they also reported several fatalities associated with tPA.[2] Their analysis also suggested that conservative treatments (ocular massage, paracentesis, hemodilution) led to worse outcomes.[2]

Ocular massage is a conservative therapy that may theoretically cause emboli to travel more distally to reduce the area of ischemia. A three-mirror contact lens is placed on the eye and pressure is applied for 10 s, to obtain retinal artery pulsation or flow cessation followed by a 5 s release.[10] Similar, anterior chamber paracentesis may be performed by removing 0.1-0.4 ml of aqueous fluid from the anterior chamber using a small gauge needle (27 or 30 gauge).[11] Theoretically, the paracentesis lowers the intraocular pressure and may allow the embolus (if any) to move further down the vessel and away from the central retina. In addition, the intraocular pressure may be decreased medically with eyedrops. If available,

Recent studies have shown a high risk of cerebrovascular event in the ensuing months after retinal artery occlusions. For acute occlusions, the patient should be referred to the ED for immediate stroke work-up. The patient should follow-up with their PMDs for further work-up. History of hypertension, non-stroke cerebrovascular disease, hyperlipidemia, and smoking in a patient with RAO, increases the risk of stroke. [13]

Neovascularization of the iris, retina or angle are common complications after central retinal artery occlusion. This can cause further vision loss or pain in the affected eye. Findings of neovascularization may be delayed in patients treated with tPA or hyperbaric oxygen. This may be treated with anti-VEGF agents or may require surgery if it progresses to vitreous hemorrhage or uncontrolled glaucoma.

Complications from invasive intervention with intravenous or intra-arterial tPA may include symptomatic intracranial hemorrhage, choroidal hemorrhage, or death.[2]

Visual loss with CRAO is usually severe, and is strongly correlated with the amount of retinal edema.[7] However, with CRAOs, in the presence of a cilioretinal artery, visual acuity usually recovers to 20/50 or better in over 80 % of eyes.[14] Retinal neovascularization is uncommon but may occur and patients should be followed closely.[15][16] [17]Patients need to be examined for development of iris neovascularization, which has been reported to occur in 2.5 % to 31.6 % of patients. A recent study showed an prevalence of 18 % with a mean onset of 8.5 weeks post-occlusion.

Visual field loss in BRAOs is usually permanent. Visual acuity may recover to 20/40 or better in 80 % of eyes.