Aflibercept is a soluble decoy receptor that binds vascular endothelial growth factor-A (VEGF-A), VEGF-B and placental growth factor (PIGF)[1] with a greater affinity than the body’s native receptors. It is called a decoy receptor as VEGF does not bind to its original receptors and mistakenly binds with aflibercept, thereby reducing VEGF's activity.

VEGF-A is a biochemical signal protein that promotes angiogenesis throughout the body and in the eye. By decreasing VEGF-A’s activation of its native receptors, aflibercept reduces subsequent growth of new blood vessels.[2] [3]

Overview of VEGF and its Role in Retinal Disease

VEGF is a member of the platelet-derived growth factor (PDGF) family.  The VEGF gene family consists of VEGF-A, VEGF-B, VEGF-C, VEGF-D and placental growth factor (PlGF), located on chromosome 6p12.[4] The binding of VEGF with its receptors leads to endothelial cell proliferation and new blood vessel growth and therefore plays a key role in angiogenesis.  New blood vessel growth and development are extremely complex and coordinated processes that require a cascade of receptor activations.  In this cascade, VEGF represents an initial and critical rate-limiting step in physiological angiogenesis. [5][6] [7]  The critical role of VEGF in angiogenesis can be seen in the fact that a loss of a single VEGF allele can result in defective vascularization.[8]

There are nine VEGF-A isoforms:  VEGF121, VEGF145, VEGF148, VEGF162, VEGF165, VEGF165b, VEGF183, VEGF189 and VEGF206. [9]    The most abundant isoform found in the eye is VEGF165. [10] [11]  VEGF165 is a secreted heparin-binding homodimeric 45-kDa glycoprotein with a significant fraction bound to the cell surface. [12] VEGF activates endothelial cells by binding VEGFR-1 (Flt-1) and VEGFR-2 (KDR) endothelial cell receptors, which in turn activate intracellular signal transduction cascades. [12] VEGFR-2 is thought to be principally responsible for VEGF signaling in angiogenesis.[12]

VEGF-A levels have been found to be elevated in the vitreous of patients with neovascular (wet) age-related macular degeneration (AMD),[13]diabetic macular edema, and retinal vein occlusion. Choroidal neovascularization (CNV) in AMD may be instigated by several events, such as accumulation of lipid metabolic byproducts, oxidative stress, reduction in choriocapillaris blood flow, and alterations in Bruch’s membrane. [14] [15] [16] Hypoxia has been shown to induce VEGF gene transcription.  As a response to metabolic distress, the retinal pigment epithelium (RPE) and retinal tissue produce various factors, particularly VEGF, which induce CNV proliferation. VEGF has been shown to be a chemo-attractant for endothelial cell precursors, causing CNV in mouse models. [17] VEGF also prevents endothelial cell apoptosis. [18] Additionally, VEGF promotes metalloproteinase production by endothelial cells, causing tissue degradation that facilitates invasion by new vessels. [19] [20] VEGF is a powerful agonist of vascular permeability, which causes vascular leakage and macular edema. [21] Placental Growth Factor (PIGF) may work synergistically with VEGF, contributing to vascular inflammation and leukocyte infiltration.[2] [3] VEGF is thought to cause increased vascular permeability by formation of fenestrations in microvascular endothelium. [22] [23] Furthermore, VEGF was shown to up-regulate leukocyte adhesion to ICAM-1 in mice, thereby promoting vascular permeability and capillary non-perfusion. [24] On this basis, inhibition of VEGF activity is central to the treatment of macular edema and prevention of progressive capillary non-perfusion, especially in diabetic retinopathy and retinal vein occlusion.

Aflibercept is a 115 kDa fusion protein. It consists of an IgG backbone fused to extracellular VEGF receptor sequences of the human VEGFR1 and VEGFR2.[2] [3] As a soluble decoy receptor, it binds VEGF-A with a greater affinity than its natural receptors.  In an experimental model, aflibercept’s equiibrium disassociation constant (Kd, inversely related to binding affinity) for VEGF-A165 was 0.49 pM, compared with 9.33 pM and 88.8 pM for experimental native VEGFR1 and VEGFR2, respectively.[2] Aflibercept’s high affinity for VEGF prevents the subsequent binding and activation of native VEGF receptors. Reduced VEGF activity leads to decreased angiogenesis and vascular permeability. [2] [3] Inhibition of PIGF and VEGF-B may also aid the treatment of angiogenic conditions.[2] PIGF has been associated with angiogenesis and can be elevated in multiple conditions, such as wet AMD.[2][25] [26] [27] [28] VEGF-B overexpression has recently been connected with breakdown of the blood-retinal battier retinal angiogenesis.[29]Thus, inhibition of VEGF-A, VEGF-B, and PIGF may all contribute to the efficacy of aflibercept.

Aflibercept has a unique binding action and binds to both sides of the VEGF dimer, forming an inert 1:1 complex, also termed a VEGF trap. Additionally, aflibercept is the only drug in its class to bind to PIGF-2.[2] [3]

Intravitreal aflibercept injection (EYLEA®; Regeneron Pharmaceuticals, Inc) was approved by the FDA in 2011 for the treatment of neovascular (wet) age-related macular degeneration (AMD) following two large clinical trials.[30] [31] Since then, it has also been approved for macular edema following retinal vein occlusion (RVO), diabetic macular edema (DME), and, most recently for diabetic retinopathy (DR) in patients with DME.[30][32]

Ziv-aflibercept (Zaltrap®, Sanofi, developed in collaboration with Regeneron Pharmaceuticals, Inc.) in combination with 5-flourouracil, leucovorin, irinotecan-(FOLFIRI), is indicated for patients with metastatic colorectal cancer (mCRC) that is resistant to or has progressed following an oxaliplatin‑containing regimen.   Ziv-aflibercept contains the same protein (active drug) as aflibercept, but is specifically formulated for injection as an intravenous infusion.  Ziv-aflibercept is not intended for ophthalmic use, as the osmolarity of the ziv-aflibercept preparation is significantly higher than that of intravitreal aflibercept injection.[33] However, intravitreal ziv-aflibercept has been used with success for multiple ocular conditions with acceptable safety profile[34].

The approved dose of intravitreal aflibercept injection (IAI) is 2.0mg in 0.05ml.  Recommended dosing regimen and frequency vary according to disease indication:[30]

Aflibercept is typically given by transconjunctival intravitreal injections into the posterior segment via the pars plana.

Aflibercept is supplied as one single-use, 3-mL, sterile, glass vial. It is designed to deliver .05 mL of 40 mg/mL. It should be refrigerated at 2-8 degrees C. It should not be frozen or used beyond the date on the carton and container label.[30]

Age-related Macular Degeneration (neovascular with CNV) - VIEW 1 and VIEW 2 were two prospective, multicenter, double-masked, randomized, parallel-group, active-controlled phase 3 studies that evaluated the efficacy and safety of various doses and dosing regimens of IAI compared with ranibizumab in a non-inferiority paradigm in wet AMD.  In total, 2,457 patients were randomized in the two trials.  The primary endpoint was the proportion of patients who maintained vision (defined as loss of less than 15 ETDRS letters) from baseline at 52 weeks.  Patients were followed for 96 weeks. Table 1 summarizes key efficacy results from VIEW 1 and VIEW 2 studies.[35] [36] 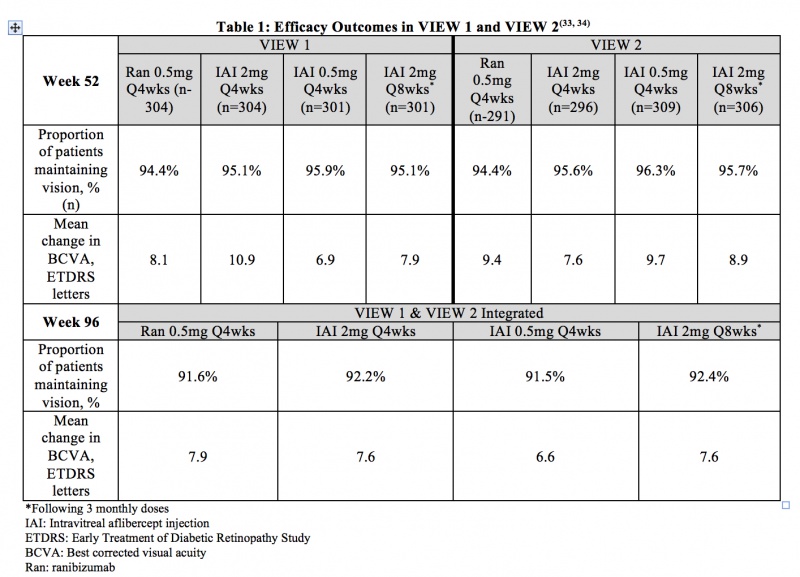 Diabetic Macular Edema (DME) – VIVID and VISTA were two prospective, multicenter, double-masked, randomized, laser-controlled phase 3 studies that evaluated the efficacy and safety of IAI compared with laser in patients with DME.  In total, 872 patients were randomized in the two trials.  The primary endpoint of VIVID and VISTA was the mean change from baseline of BCVA at week 52 as measured by ETDRS letter score.  Patients were followed for a total of 148 weeks.  Table 2 summarizes key efficacy results of the two studies.[37] [38] 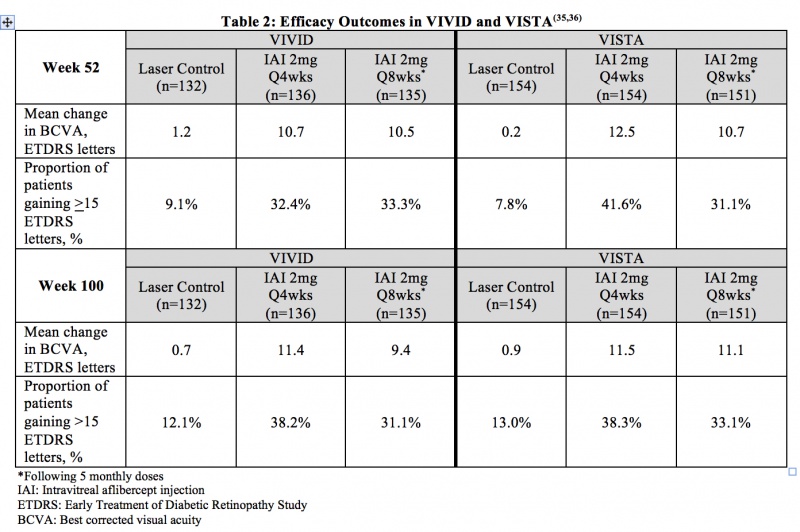 The most common adverse reactions, occuring in > 10% of patients receiving IAI through week 100, were conjunctival hemorrhage, cataract, and eye pain.  The incidence of non-ocular SAEs was slightly higher for some events in the combined IAI group (e.g. anemia and cerebrovascular accident), and for others in the laser group (e.g. acute myocardial infarction and acute cardiac failure) with no apparent general trend.  Arterial thromboembolic events as defined by APTC criteria occurred at similar rates across the IAI treatment groups and the laser control group.[37] [38]

Macular edema due to Central RVO (CRVO) - COPERNICUS and GALILEO were two prospective, multicenter, double-masked, randomized, sham-controlled phase 3 studies that evaluated the efficacy and safety of monthly (2mg q4 weeks) IAI compared with sham in patients with CRVO.  In total, 361 patients were randomized in the two trials.  The primary endpoint was the proportion of patients who gained at least 15 letters in BCVA at week 24.   Table 3 summarizes key efficacy outcomes from the two trials.[39] [40] [41]

Macular Edema due to Branch RVO (BRVO)  – VIBRANT was a prospective, multicenter, double-masked, randomized, laser-controlled phase 3 study that evaluated the efficacy and safety of monthly (2 mg q4 week) IAI compared with laser in patients with BRVO.  In total, 183 patients were randomized.  The primary endpoint of VIBRANT was the proportion of patients who gained at least 15 ETDRS letters in BCVA at week 24.  Table 4 summarizes key efficacy results at week 24 and week 52 from the VIBRANT trial.[42] [43]

Through week 52, the most common ocular adverse event in the IAI and laser treatment groups was conjunctival hemorrhage.  The rate of non-ocular SAEs was higher in the IAI group compared to the laser control group.  Pneumonia, anemia, and dehydration were the only serious adverse events that occurred in two or more patients in either study arm.  In the laser control group, 2 APTC-defined arteriothromboembolic events (ATEs) occurred, and no ATEs occurred in the IAI group.[42] [43]

Warning, Safety, and Precautions in Ophthalmic Use

Intravitreal aflibercept, bevacizumab, and ranibizumab are all commonly used to treat a variety of retinal diseases.  Some key areas of comparison are listed here.

As previously noted, aflibercept is a 115 kDa soluble decoy receptor that binds VEGF-A and PIGF with a greater affinity than their natural receptors, inhibiting the subsequent binding and activation of VEGF receptors.  Bevacizumab and ranibizumab, on the other hand, are a monoclonal antibody and an antibody fragment, respectively, that bind to soluble VEGF and inhibit its binding to receptors on the surface of endothelial cells.[2] [3]

Aflibercept has a unique binding action compared to bevacizumab and ranibizumab. It binds to both sides of the VEGF dimer, forming an inert 1:1 complex. Ranibizumab also binds to a single VEGF molecule, but only on one side. Bevacizumab, on the other hand, can bind to multiple VEGF molecules. Aflibercept is unique in its ability to bind to multiple VEGF-A isoforms. An in-vitro comparison of these three VEGF inhibitors showed aflibercept to have the highest affinity, by a significant margin (94 fold), for VEGF-A165. Additionally, aflibercept was the only drug to bind to PIGF-2. [2] [3]

Aflibercept was approved for ocular use in 2011. Ranibizumab was approved in June 2006. Off-label use of the intravenous formulation of bevacizumab was compounded for the intravitreal route in the treatment of ocular disorders around mid-2005.[50] [51]

Diabetic Retinopathy Clinical Research (DRCR) Network Protocol T is a two-year, randomized, multi-center clinical trial at 89 United States sites evaluating the safety and efficacy of intravitreal aflibercept, bevacizumab and ranibizumab in central-involved DME patients with visual acuity (VA) of 20/32 to 20/320. This independent study was supported by the National Institutes of Health (NIH), and was the first randomized clinical trial comparing these three anti-VEGF medications in any indication.  The study enrolled 660 patients. The primary endpoint was the mean change in visual acuity from baseline at one year.[52]

The results showed that all three medications were safe and effective.  At year 1 for the primary endpoint, intravitreal aflibercept demonstrated a significantly greater improvement in visual acuity compared to both bevacizumab and ranibizumab, especially in patients presenting with worse visual acuity.  In this study, sub-groups based on visual acuity were prospectively delineated to be 20/40 or better and 20/50 or worse (pre-defined sub-groups).  In the group presenting with 20/40 or better vision, no statistically significant difference was found between the three drugs.  In the group presenting with 20/50 or worse vision, intravitreal aflibercept showed statistically significant superior visual acuity outcomes, with monthly injections.  Fewer injections (one less injection over one year) and laser photocoagulation treatments were reported in the intravitreal aflibercept group. Ocular and systemic adverse events were reported to have similar frequencies for all 3 groups (no statistical significant differences in key safety metrics).[52]

A single dose of intravitreal aflibercept (~$1,850/dose) is comparable in cost to ranibizumab (~$1,950/dose for 0.5mg dose), although notably more expensive than compounded bevacizumab (~$50/dose).[53] [54][55]However, the FDA approved treatment schedule of intravitreal aflibercept in DME and AMD indicates fewer injections over time, as compared to FDA approved treatment schedules for ranibizumab.