Two medical students from Indiana University, Harold R. Novotny and David L. Alvis, described and demonstrated the technique of retinal fluorescein angiography (FA) in 1961.[1] John Donald McIntyre Gass began publishing his experience with FA in 1967 and his efforts led to the wider acceptance of the technique in the evaluation of retinal disease.[2] More modern advances such as digital imaging and computer software analysis have further enhanced the utility of the procedure.

FA requires the use of a dedicated fundus camera equipped with excitation and barrier filters. Fluorescein dye is injected intravenously, usually through an antecubital vein with sufficient speed to produce high contrast images of the early phases of the angiogram. White light from a flash is passed through a blue excitation filter. Blue light (wavelength 465-490 nm) is then absorbed by unbound fluorescein molecules, and the molecules fluoresce, emitting light with a longer wavelength in the yellow-green spectrum (520-530nm). A barrier filter of 520-530nm allows capturing only light emitted from the excited fluorescein. Images are acquired immediately after injection and continued for ten minutes depending on the pathology being imaged. The images are recorded digitally or on 35mm film.

A wide range of complications can occur with FA. The most common reactions are transient nausea that occurs in 3-15% of patients, vomiting (7%), and pruritus. More severe reactions such as urticaria, pyrexia, thrombophlebitis, and syncope are more rare. Local tissue necrosis can occur with extravasation of dye, however, mild pain and redness is more typical. Severe life-threatening reactions such as anaphylaxis, cardiac arrest, and bronchospasm do occur but are extremely rare. Death is estimated to occur in 1:221,781.[3] No serious adverse events have been reported to occur in pregnancy however it is considered a contraindication. [4][5] Despite the relatively low rates of serious adverse events, informed consent should always be obtained prior to performing fluorescein angiography. Further, imaging facilities should be adequately equipped and prepared to manage complications associated with fluorescein angiography.

Following injection into an antecubital vein, dye passes through the short posterior ciliary arteries and appears in the optic nerve and choroid usually within 8-12 seconds. This is dependent on the age and cardiovascular status of the patient as well as the speed of dye injection. The filling of the choroidal circulation is seen as the choroidal flush, a patchy and mottled hyperfluorescence as the choroidal lobules fill. The retinal circulation appears 1-3 seconds later (11-18 seconds after injection). The early arteriovenous phase describes the filling of the retinal arteries, arterioles and capillaries. This is followed by the late arteriovenous phase or laminar venous phase as the dye fills the veins in a laminar pattern. In the normal macula, the capillary-free zone is seen as dark due to blockage of choroidal fluorescence by xanthophyll pigment and tightly packed retinal pigment epithelial cells. The peak phase with maximal fluorescence occurs at approximately 30 seconds and recirculation phases follow. The recirculation phase occurs approximately 3-5 minutes after injection of fluorescein. After 10 minutes fluorescein is usually no longer seen in retinal vessels however several structures including the optic nerve head, Bruch’s membrane, and sclera are stained with fluorescein and continue to fluoresce. [6]

Hypofluorescence can occur secondary to a

Blockage of normal fluorescence may result when any opacity occurs anterior to the fluorescence. Examples include corneal scar, cataract, vitreous hemorrhage, and nerve fiber layer hemorrhage. Choroidal fluorescence can be blocked by retinal hemorrhage, subretinal material, or even an abnormal accumulation of normal material in the retinal pigment epithelium as occurs with lipofuscin in diseases such as Stargardt’s disease. A vascular filling defect will cause an absence or delay of normal fluorescence in the tissue affected. This may occur with retinal or choroidal vascular occlusion or with occlusion of the short posterior ciliary arteries supplying the optic nerve.

Hyperfluorescence can occur because of

Leaking fluorescein can come from incompetent blood vessels such as with choroidal neovascularization or retinal neovascularization or through a diseased retinal pigment epithelium that no longer blocks leakage of fluorescein from the choroid. Areas of leakage in an FA show gradual enlargement and blurring of their margins. This is in contrast to structures that stain. Staining results in increasing fluorescence throughout the angiogram but the margins remain distinct. Normal structures such as optic nerve head and sclera will stain but pathology, such as drusen and disciform scars, also stain with fluorescein. Pooling results when fluorescein gradually fills a fluid-filled space. A transmission, or window defect, occurs when a layer that normally blocks fluorescence is missing. This most commonly occurs when RPE is missing and the bright choroidal fluorescence is seen early in the FA. The intensity of the fluorescence fades and the margins remain distinct. Autofluorescence can be seen before fluorescein dye is injected when structures such as optic nerve head drusen and lipofuscin normally fluoresce. Some specifically equipped scanning laser ophthalmoscopes and fundus cameras can use the fluorescence of lipofuscin to document the health of the RPE layer.

FA has contributed to our understanding of many pathologic processes in the retina and remains the preferred method to image the choroidal and retinal circulation. It is an essential tool used by many Ophthalmologists to diagnose a multitude of retinal diseases. 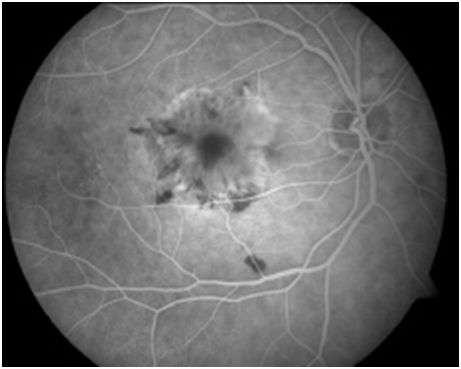 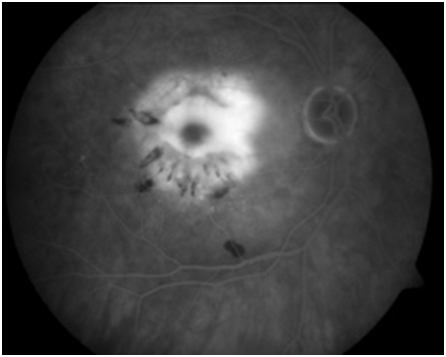 Figure 2: Red-free photo, early arteriovenous phase, peak phase , and late phase angiogram of a left eye with choroiditis. Early angiogram demonstrates hypofluorescence of the choroidal lesions with the development of circumferential hyperfluorescence and leakage in the later stages of the angiogram. 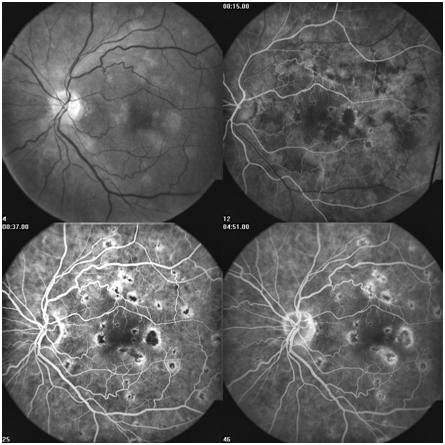 Figure 3A: Late arteriovenous phase angiogram demonstrates hyperfluorescence of microaneurysms as well as some irregular and abnormal retinal vessels in the macula. 3B: these vessels leak in the later phase. 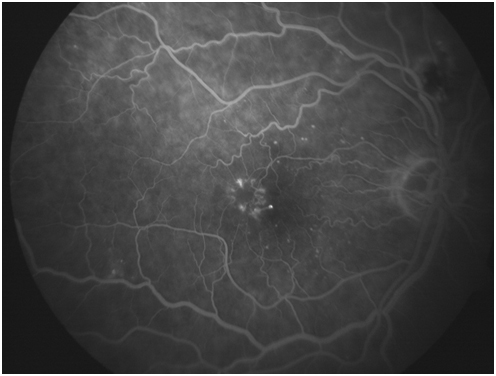 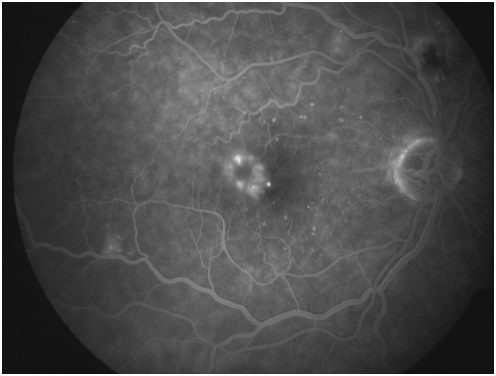 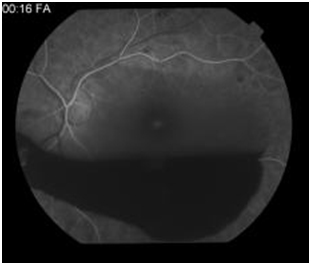 Figure 5A: Peak phase angiogram in a patient with diabetes demonstrates areas of hyporfluorescence in the superior macula secondary to a vascular filling defect as well as hyperfluorescent microaneurysms. 5B: Late phase angiogram demonstraing diffuse macular leakage from microaneurysms, vascular leakage, incompetent retinal pigment epithelium, and tractional affect from a preretinal membrane. 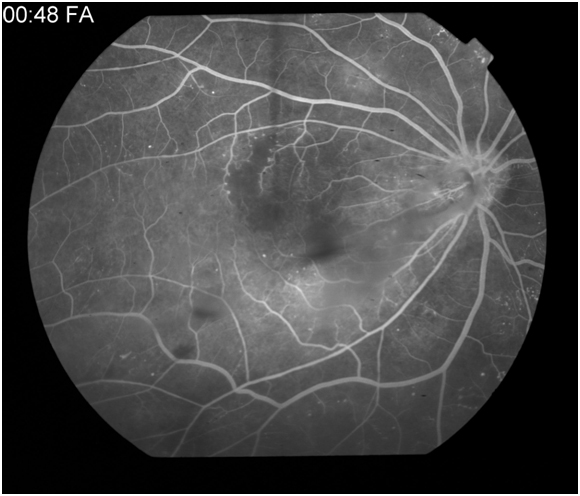 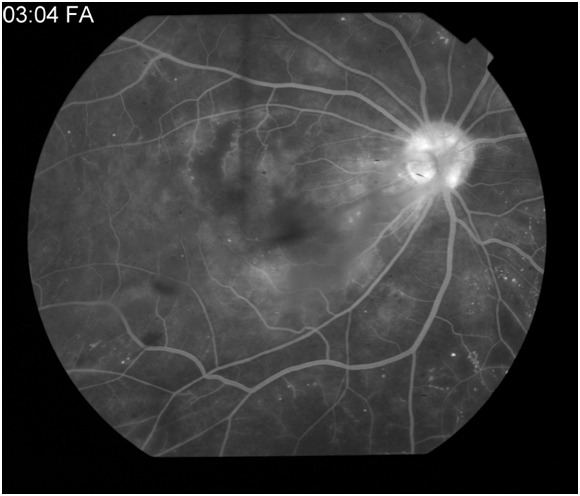 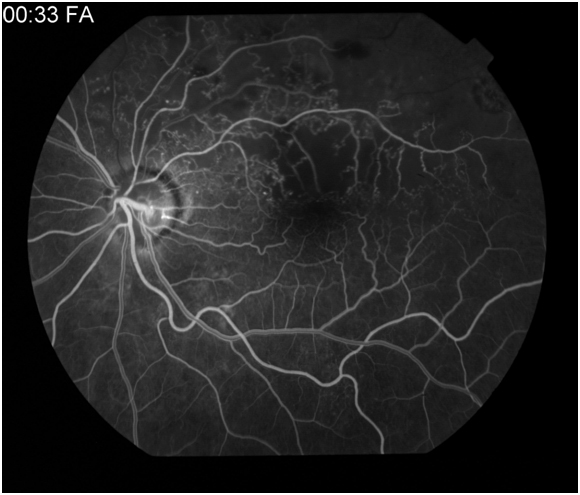 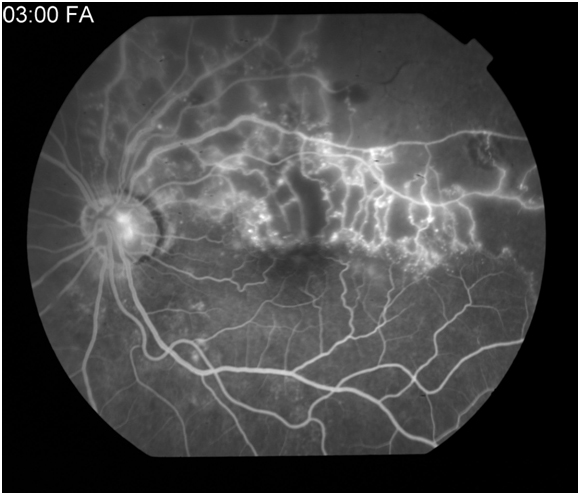