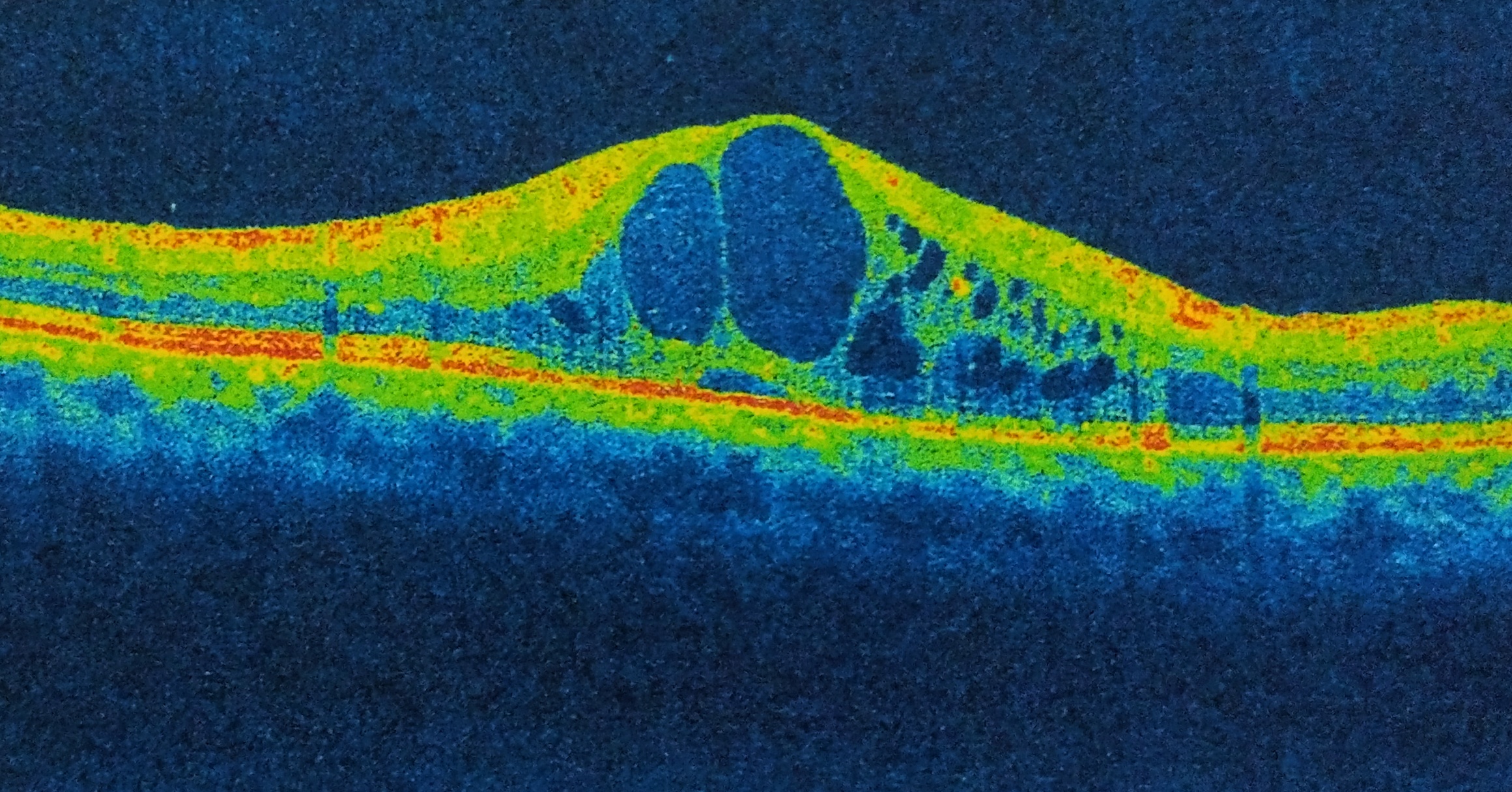 The American Academy of Ophthalmology Preferred Practice Patterns defines Cystoid Macular Edema (CME) as retinal thickening of the macula due to a disruption of the normal blood-retinal barrier; this causes leakage from the perifoveal retinal capillaries and accumulation of fluid within the intracellular spaces of the retina, primarily in the outer plexiform layer [1]. Visual loss occurs from retinal thickening and fluid collection that distorts the architecture of the photoreceptors. CME is a leading cause of central vision loss in the developed world [2].

A delicate exchange of homeostatic mechanisms is in place with the vitreous, retina, retinal pigment epithelium (RPE), and choroid receiving their circulation through the retinal and choroidal vasculature.

A variety of risk factors may disrupt the normal interactions affecting the retinal environment. There is an intrinsic balance amongst the osmotic force, hydrostatic force, capillary permeability, and tissue compliance that occur within the vasculature [3][4]. Specifically, the capillary filtration rate should equal the rate of fluid removal from extracellular retinal tissue, such as glial and RPE cells. Once these forces are disrupted an imbalance occurs and accumulation of fluid is seen in cystoid spaces within the inner layers of the retina, most commonly the outer plexiform layer (OPL). The OPL is more prone to fluid collection due to the watershed area that exists between the retinal and choroidal circulation, especially within the central retina due to its anatomical avascular zone [5]. Accumulation of the fluid commonly occurs in the Henle’s fiber layer causing the classic petaloid pattern.

Specifically, a common factor that can cause CME is vitreomacular traction (VMT). VMT can cause stress at the Muller cell end-feet, exerting tractional forces and contributing to the release of inflammatory factors such as basic fibroblastic grown factor (bFGF), vascular endothelial growth factor (VEGF), and platelet-derived growth factor (PDGF). This results in blood-retinal barrier breakdown from separation of the retina and RPE, lysis of muller cells, leakage and edema [6][7][8][9]. However, typically CME associated with VMT does not demonstrate leak on FFA.

Using slit lamp or direct/indirect ophthalmoscopy, clinically significant foveal edema and retinal thickening more than 300 μm can be seen as a loss of foveal reflex; this is better visualized using green light to outline the cystic spaces. Subclinical foveal edema is described as edema less than 300 μm and is better seen through retinal imaging [10]. Vitritis and optic nerve head swelling can also be seen in clinical examination.

CME that does not demonstrate leakage on FA include:

Color Fundus Photography (CFP) depicts intraretinal cysts within the foveal region of the macula in Henle's layer in a honey comb pattern (Figure 1). 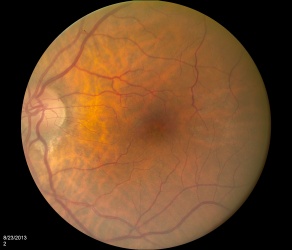 Fluorescein Angiography (FA) studies the circulation of the retina and choroid.  In the early phase of FA, capillary dilation in the perifoveal region is appreciated (Figure 2). 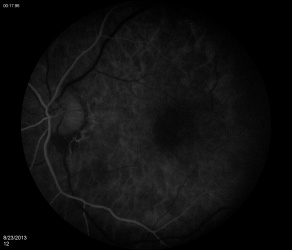 In the late phase (may take 5-15 minutes) of FA, leakage into the cystoid spaces is distributed radially in Henle’s layer forming the classic petaloid leakage pattern or expansile dot appearance (Figure 3). 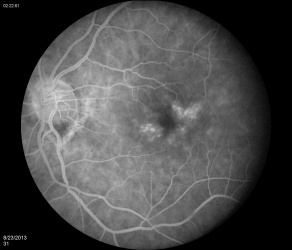 FFA can also show late staining of the optic disc (especially in intermediate uveitis, Irvine Gass syndrome, Birdshot chorioretinopathy) . If leakage is elsewhere, such as in the peripheral retina or near the optic nerve, the appearance looks more honeycomb-like [10][28][29].

Optical Coherence Tomography (OCT) objectively obtains cross-sectional, high-resolution images of the retina. In CME, OCT can be diagnostic through measurement of the retinal thickening with depiction of the intraretinal cystic areas of low reflectivity in OPL [30][31] (Figure 4). 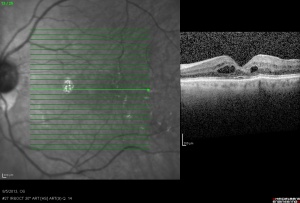 OCT can depict the mechanical forces induced by vitreomacular interface abnormalities, such as VMT or epiretinal membrane (ERM), via a hyperreflective band on the inner surface of the retina [32][33]. In severe CME, subfoveal fluid may be evident on OCT.

Autofluorescence (AF) depicts the health of the RPE and intraretinal cysts appear as hyperautofluorescent.

Carbonic anhydrase inhibitors (CAIs) – CAIs alter the polarity of the ionic transport systems in the RPE moving fluid away from the intracellular spaces [39]. CAIs are helpful in paclitaxel and docetaxel induced CME [40][41] and RP induced CME [42].

Pharmacologic vitreolysis agents – Chondroitinase, dispase, hyaluronidase, plasmin, and microplasmin induce a posterior vitreous detachment to relieve CME from VMT [48][49][50][51]. Microplasmin is currently the agent that shows greatest promise with its stability, patient tolerance, and ease of storage and administration. Phase II trial has shown that a 125 μg dose repeated three times released VMT in 58% of patients one month after injection [52][53][54]. Phase IIb trial has shown that intravitreal injection of 125 μg seven days prior to vitrectomy resolved VMT in 28% of patients [55]. Phase III trial has shown that intravitreal injection of 125 μg for treatment of VMT associated with subjective visual dysfunction showed improvement of the adhesion [56].

Tractional components can be addressed by releasing the posterior hyaloid in VMT or conducting an internal limiting membrane peel of an ERM. Specifically, PPV for the tractional component of VMT causing CME secondary to diabetes has been shown to improve macular edema in 80-92% of patients [58][59]. Harbour et al. demonstrated that vitrectomy done on vitreous incarceration in the anterior segment and pseudophakic macular edema resulted in improvement in visual acuity in all patients [60]. Though internal limiting membrane peeling in CME secondary to diabetes, central retinal vein occlusion (CRVO), uveitic macular edema, and RP has shown anatomical improvement, visual acuity results are inconclusive [61][62][63][64][65][66][67][68][69][70][71][72]. Neodymium yttrium aluminum garnet (Nd:YAG) laser can also help to relieve tractional components, such as vitreous adhesions to iris.

Side effects of vitrectomy include cataract, retinal detachment, vitreous hemorrhage, and a rise in intraocular pressure.

CME is usually self-limiting and spontaneously resolves within 3-4 months. Depending on the etiology, resolution of the edema may be helped via medical or surgical options. If the edema is chronic (more than 6-9 months) permanent damage to the photoreceptors with retinal thinning and fibrosis can occur [90][91][92][93].