Disease Chikungunya virus (CHIKV) is an enveloped, positive-sense RNA arbovirus of the genus Alphavirus (family Togaviridae).[1][2] CHIKV is the cause of chikungunya fever, an emerging illness with systemic symptoms that include abrupt high fever, headache, skin rash, myalgia, and arthralgia. Arthralgia due to chikungunya is severe, deforming, often bilateral and symmetric, with up to 50% of patients developing persistent arthritis. The word “chikungunya” translates as “that which bends up,” and describes the arthralgia and modified gait associated with the disease.[2]

Ocular manifestations of CHIKV, especially uveitic intraocular inflammatory diseases, have become more recognized in recent years. Uveitis can be concurrent with systemic symptoms or can appear after a quiescent interval. CHIKV-associated anterior uveitis is most common, but intermediate, posterior and panuveitis have been reported. CHIKV is difficult to diagnose and ophthalmologists should consider CHIKV in the differential of uveitis in patients with prior or current constitutional symptoms and risk factors for exposure to CHIKV.

CHIKV sylvatic transmission cycles involve circulation by mosquitoes through wild primates and small mammal reservoirs.[2] The spread of CHIKV to humans primarily occurs through the bite of an infected Aedes (Aedes aegypti or Aedes albopictus) mosquito. Humans are the primary host in disease epidemics, and vector-borne transmission is more likely in the first week of illness when viremia is highest. Intrapartum transmission occurs in maternal viremia, but in utero transmission is rare; CHIKV has not been found in breast milk.[3] Blood-borne transmission has been reported in health care professionals. Viral transmission via corneal graft transplantation has not been reported. However, one study identified corneal donors seropositive for CHIKV IGM and/or IgG whose corneal samples showed evidence of the virus after conventional eye bank preservation methods.[4] Additionally, mouse studies have shown corneal tissue infected with CHIKV can lead to viral transmission when inoculated onto scarified cornea.[5]

CHIKV is endemic in Africa, India, Southeast Asia, South America, and Central America. Outbreaks of chikungunya fever are common during monsoon season, possibly as a result of an abundance of arthropod vectors and conducive weather. Travel to endemic areas and exposure to Aedes mosquitoes are risk factors for the disease, although chikungunya fever is increasingly seen in non-endemic regions due to increased in international travel. 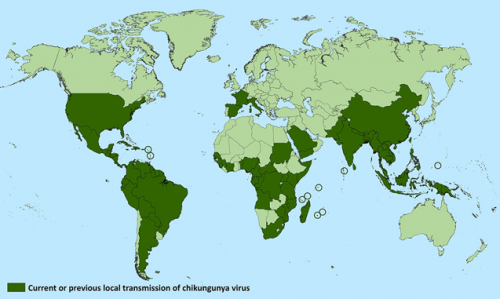 During an outbreak in 1972, CHIKV infection was seen as benign and self-limiting, however in 2003 the virus reemerged as an epidemic in the Indian Ocean area with severe infections including CNS involvement, multiorgan failure, and death. More than 266,000 people were infected during a 2005-2006 outbreak on Reunion Island and 1,400,000 cases were reported in India in 2006.[6] In the 2006 outbreak in India, patients were identified with uveitis and systemic clinical symptoms of CHIKV infection.[1] Recent cases have occurred in Western Europe, Australia, the Caribbean, and the United States. In the Americas from 2014-2016 more than 2 million cases were reported. Precise prevalence and incidence estimates of ocular manifestations in CHIKV infection are unknown. The average case fatality rate of chikungunya fever is estimated at one in 1000, often in the very young, elderly, or immune-compromised.

The precise mechanism of ocular involvement due to CHIKV infection is unknown. CHIKV has been found to target fibroblasts in the eye, including those of corneal and scleral stroma, corneal endothelium, ciliary body smooth muscle stroma, iris, and those between ocular muscle fibers.[7] CHIKV antigens have also been identified in fibroblasts of these sites in humans.

The simultaneous onset of systemic and ocular disease found in some patients suggests direct viral involvement, however the later onset of uveal symptoms after systemic disease in other patients may indicate a delayed immune response may also play a role after CHIKV infection.[1] Antigenic mimicry, delayed hypersensitivity reactions, or stimulation of a pathogenic lymphocyte reaction may be responsible for this delayed immune response. It is not known whether active viral particles persist in the eye long-term, which may contribute to inflammatory reactivation in delayed cases.

There is no vaccination that protects against CHIKV, although two phase 1 clinical trials have shown a positive safety and immunogenicity profile. The most effective prevention strategy is to prevent mosquito bites through insect repellants, long-sleeved shirts and pants, air conditioning, and mosquito nets.

During the first 8 days of acute infection, blood samples may be tested for viral RNA by reverse transcription polymerase chain reaction (rt-PCR), or direct isolation of virus or viral antigens. Because the viral load decreases by eight days, Pan American Health Organization and World Health Organization (PAHO/WHO) guidelines state that after this time serologic tests including IGM ELISA/rapid tests or IgG paired sera should be used. The gold standard diagnosis of CHIKV is viral culture inoculation of mosquito or mammalian cell cultures, but viral culture is typically not performed in the clinical setting.[2]

Diagnosis of CHIKV-associated uveitis is usually presumptive based on the clinical scenario. Although presence of CHIKV RNA has been documented by PCR analysis of aqueous samples in some patients with anterior uveitis and previous CHIKV fever,[8][9][10] it is unclear whether the presence of viral RNA is pathogenic or merely a bystander after recent systemic illness. Furthermore, a negative anterior chamber tap does not exclude a diagnosis of CHIKV-associated uveitis if viral levels are beyond the limit of detection, or if the virus has been cleared but chronic immune responses remain. Most data on ophthalmic findings come from case series without uniform methods of testing and diagnosis.

Systemic CHIKV infection has been defined into three clinical stages: acute (up to the first 3 weeks), post-acute (week 3 to month 3), and chronic (after 3 months).[11] Acute disease is generally characterized by fever >102˚F (39˚C) and severe joint pain. The majority of patients infected with CHIKV develop systemic symptoms within a few days of infection. Severe systemic infections may result in myocarditis, hepatitis and meningoencephalitis. Immunosuppressed patients are at higher risk of multi-organ involvement. One case series found 60% of patients developed ocular symptoms during the course of systemic illness, while 40% of patients presented within 6 weeks after the initial illness subsided.[1] Photophobia, conjunctival hyperemia, and retro-orbital pain are frequent in the acute phase.[12] Late onset CHIKV-associated inflammatory eye disease should be considered in patients with travel to endemic areas with chronic musculoskeletal symptoms such as distal extremity arthralgia. Most patients will recall an acute febrile illness. 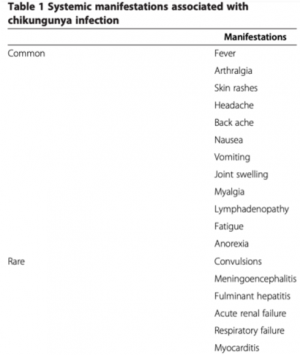 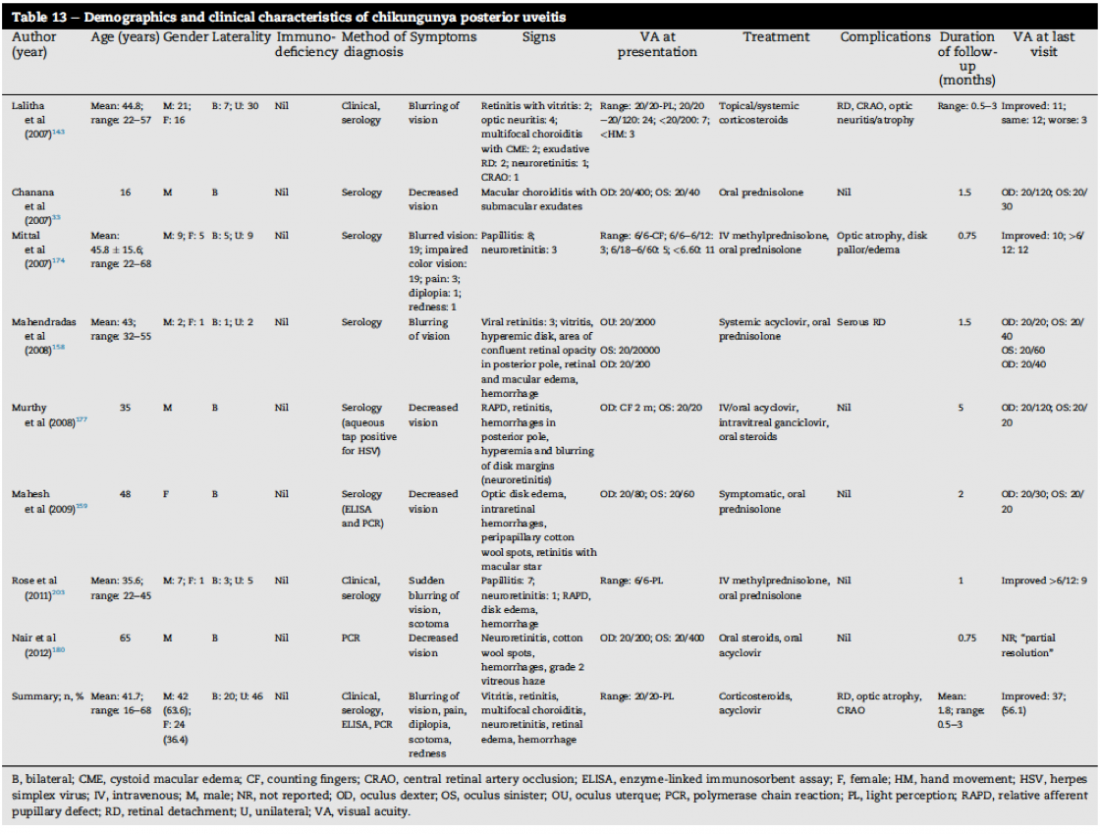 There is no specific anti-viral treatment for chikungunya fever and there have been no randomized controlled trials for treatment of ocular inflammatory diseases associated with chikungunya.