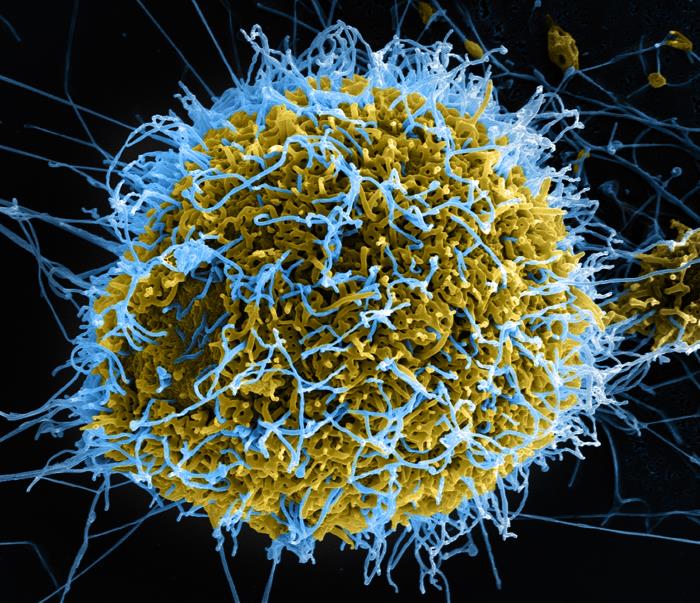 Ebola Virus Disease (EVD), previously known as Ebola hemorrhagic fever, is a rare and lethal zoonotic viral infection caused by the Ebola virus. It is typically spread by bats to humans and other primates.

Primary signs and symptoms include:

Ophthalmic signs include conjunctival injection (48-58%), subconjunctival hemorrhage, or vision loss of unclear origin. In one cohort, bilateral injection was found to be predictive of acute EVD infection.[1] In secondary infection of healthcare workers, conjunctivitis is an early presenting sign with flu-like symptoms and may appear before patients seek EVD-related care.[2]

Death typically occurs due to multiorgan failure and shock due to uncontrollable hemorrhage.

Survivors of EVD can suffer from a multitude of symptoms, collectively termed the “post-Ebola virus disease syndrome” (PEVDS).[3][4] Ocular complications are one of the most common manifestations of PEVDS, in addition to arthritis, hearing loss, abdominal pain, neuropsychiatric disorders, and viral persistence in immune-privileged organs. As many as 60% of EVD survivors report ocular symptoms after acute infection.[5] Prompt ophthalmic care is of particular importance given the potential impact on quality of life if left untreated. The following ophthalmic sequelae have been reported in various case series:[6][7][8]

The most common complication after Ebola virus infection is uveitis, with reported rates as high as one-third of all survivors. Patients typically present three to eight weeks after discharge. Uveitis is most often unilateral and anterior.[8]Risk factors for developing post-infectious uveitis include a high viral load, red eye during the acute phase, and older age.[5] 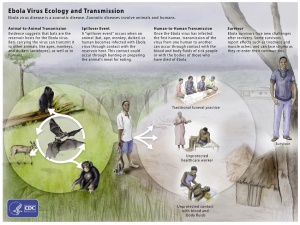 Ebola virus ecology and transmission. Courtesy of the CDC. Use according to the Public Domain.[9]

Ebola virus is a negative-sense, single-strand, enveloped RNA virus within the Ebolavirus genus and Filoviridae family. It is one of four viruses in the Ebolavirus genus that are known to cause disease in humans (Ebola, Sudan, Taï Forest, and Bundibugyo). Of these four, Ebola virus is the most severe. Like other RNA viruses, Ebola virus quickly generates genome mutations through error-prone replication. This characteristic increases the infectivity of the virus.

Fruit bats, likely of the Pteropodidae family, are believed to be the natural reservoir for the virus. Animal-to-animal, human-to-human, and animal-to-human transmission pathways have all been reported. Once a human has been infected, transmission of the virus can occur through direct contact with body fluids or blood or sexual contact. The virus has been reported to persist even after recovery in certain body fluids, including semen[10] and aqueous humor[11] (see below).

The first reported outbreak of EVD was reported in 1976 in Zaire (now the Democratic Republic of the Congo) with 318 cases and an 88% case-fatality rate. Since that initial report, 13 smaller outbreaks (32 to 315 cases) have been reported in Middle Africa. The largest outbreak to date occurred in 2014 and was unique in its location (West Africa), duration (3 years), and magnitude (more than 28,000 cases with approximately 11,000 fatalities). Overall, the average case-fatality rate is around 50%.[12]

The most recent outbreak in the Democratic Republic of the Congo began in the summer of 2018 and has continued through 2020[13]. Since 2014, Boston Children’s Hospital has tracked publicly confirmed and suspected cases of EVD throughout the world using an electronic Healthmap.[14] 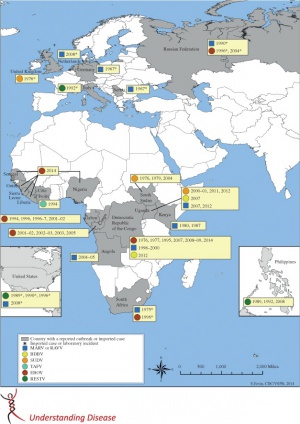 Travel to regions of the sub-Saharan Africa where EVD is endemic is the greatest risk factor for contraction of the disease. Healthcare workers are at particularly high risk given their increased likelihood of contact with bodily fluids. Risks for exposure include:

The Centers for Disease Control and Prevention (CDC) currently recommends that acutely ill patients who have traveled to a country experiencing a EVD outbreak within the past 21 days should be assessed for Ebola virus exposure.

Human pathologic studies of Ebola virus are relatively few due to the safety concerns regarding handling infected specimens and prevalence of disease in less developed areas in the world.

Gross autopsy specimens typically show evidence of hemorrhage including petechiae or ecchymoses of the skin, mucous membranes, or internal organs. Histopathological findings include hemorrhage and necrosis with intracellular eosinophilic inclusions of viral nucleocapsids. The liver, spleen, kidneys, gonads, gastrointestinal tract, and endocardium are the most common tissues involved. These findings are not specific to Ebola virus and additional confirmatory testing such as immunohistochemistry can be performed.[15]

Ebola virus is capable of infecting and replicating in many different types of tissues and cells. They initially infect the host through contact with intact mucous membranes, abraded skin, or accidental injection. After introduction to the body, the viruses enter their target cells via a process involving (1) cellular attachment, (2) endocytosis, and (3) fusion. Multiple different cellular molecules have been proposed as the target of viral entry, reflecting the broad range of Ebola virus tissue tropism.

Viral infection of the APCs leads to immune dysregulation, as evidenced by minimal inflammation in infected tissue despite large amounts of necrosis. Several studies have shown that the virus decreases the effectivity of the APCs in activating the innate and adaptive immune system while simultaneously stimulating the release of massive numbers of pro-inflammatory and vasodilatory chemokines.

In endemic areas, outbreak prevention relies heavily on avoiding contact with infected persons or animals. Effective community engagement is critical in ensuring good adherence to recommended practice. Current prevention goals from the World Health Organization include the following (WHO)[12]: 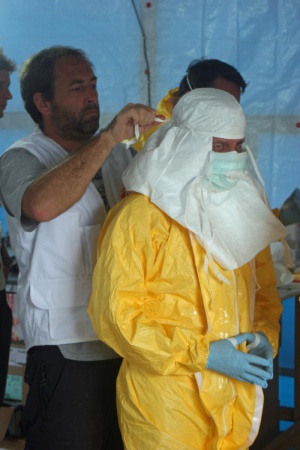 A healthcare worker donning the appropriate personal protective equipment before entering an Ebola treatment unit. Image courtesy of the CDC Public Health Image Library (PHIL). Use according to the Public Domain.

For healthcare workers, standard precautions should be taken at all times including basic hand hygiene, respiratory hygiene, and use of personal protective equipment. When caring for patients with suspected or confirmed Ebola virus, extra infection control measures should be taken to prevent contact with blood, body fluids, or contaminated surfaces. When in close contact (within 1 meter), healthcare workers should wear face protection (face shield or medical mask and goggles), a clean, non-sterile long-sleeved gown, and gloves.

In the wake of the 2014 outbreak, international efforts began in earnest to develop an effective vaccine against the Ebola virus. The two most promising candidates include chimpanzee adenovirus 3 vaccine (cAd3) from GlaxoSmithKline and the U.S. National Institute of Allergy and Infectious Disease and recombinant vesicular stomatitis virus vaccine (rVSV) from NewLink Genetics and the Public Health Agency of Canada.[17][18][19][20] [21]Phase 2 trials showed both vaccines were able to elicit immune responses by 1 month that were largely maintained through 12 months.[22]

On December 19, 2019, the United States Food and Drug Administration approved the rVSV-ZEBOV vaccine (tradename "Ervebo") for the prevention of EVD in individuals 18 years of age and older.[23]

EVD should be suspected in any patient with fever and Ebola virus exposure within the last 21 days, though early diagnosis is difficult given the similarity of EVD to other viral hemorrhagic infections. If suspicion for EVD is high, the patient should be quarantined and public health authorities should be informed. Given the biosafety risk of specimen handling, only Biosafety Level 4 laboratories are capable of performing diagnostic laboratory testing.

Adapted from the CDC[24]

Ocular manifestations in the convalescent stage of Ebola virus infection are one of the most commonly reported symptoms. The findings are usually related to prior inflammation with uveitis being the most common diagnosis. In the current literature, one case series of 96 patients reports posterior uveitis as most frequent[7] while two others of at least 600 combined patients report anterior uveitis as most frequent.[6][8] Other ocular findings include:

Live Ebola virus has been isolated from immune privileged organs after clearance of viremia including the eye[11] and reproductive organs.[10] Of note, live virus was isolated only from aqueous humor and not tears. 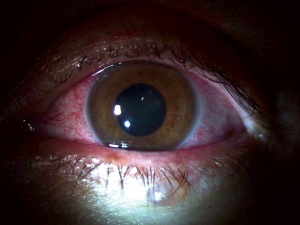 The left eye of a physician from the United States who contracted EVD and developed uveitis during convalescence. Anterior segment exam was notable for diffuse conjunctival injection, mild corneal edema with fine inferior keratic precipitates, fibrin reaction, and anterior chamber cell. Courtesy of John R. Chancellor.[25] Use according to the Public Domain.

Patients will show nonspecific signs of active or past ocular inflammation including:

Symptoms are nonspecific and include:

The differential diagnosis for EVD on initial presentation includes the following conditions:

The ocular manifestations of PEVDS are nonspecific. The differential diagnosis for post-infectious Ebola uveitis includes a broad array of both inflammatory and infectious etiologies including but not limited to:

While the majority of noninvasive diagnostic testing is not specific, it can be a useful adjunct.

Multimodal imaging including fundus photography and optical coherence tomography (OCT) can be used to evaluate retinal lesions in posterior or panuveitis. Steptoe et al. reported a case series of 14 EVD survivors with retinal lesions evaluated by multimodal imaging.[26] Retinal lesions were noted to be predominantly nonpigmented with perilesional areas of dark without pressure. Peripapillary lesions exhibited variable curvatures respecting the horizontal raphe and sparing the fovea. OCT showed abnormalities of the outer retinal layers. However, Shantha et al. have characterized the retinal lesions in Ebola virus as centrally hyperpigmented with hypopigmented borders.[7]

Fluorescein angiography (FA) may be used for initial evaluation of uveitis extent including the presence or absence of macular edema or vasculitis. Continued monitoring for treatment response can also be done with FA as necessary.

Laboratory diagnostic testing can include sending out serum and aqueous humor samples for serology or antigen detection (see above).

Management of the acute Ebola infection currently consists mostly of supportive care to manage the complications of severe hypotension and shock. However, multiple investigational therapies are currently being developed in response to the last major outbreak in 2014. The most promising therapies include ZMapp[27], a triple monoclonal antibody; remdesivir, an antiviral agent; MAb114, a single monoclonal antibody; and REGN-EB3, a triple monoclonal antibody. Recently published results of a trial randomly comparing these four treatments in patients with EVD in the Democratic Republic of the Congo showed the superiority of MAb114 and REGN-EB3 to ZMapp and remdesivir.[28]

Ocular post-infectious sequelae are managed according to causative etiology. The following section will discuss medical management of PEVDS uveitis.

Management of uveitis is based on initial presenting severity and typically occurs in a stepwise fashion. Topical steroids and cycloplegics may be prescribed first at a frequency from four times daily to every 1 hour, depending on the presentation. Oral steroids such as prednisone may be required if the vision significantly deteriorates or inflammation worsens. Intravitreal steroid injections can also be used to manage inflammation.

One report described the oral administration of the antiviral medication favipiravir with steroids to treat post-infectious Ebola uveitis, though it is unknown whether its use influenced disease resolution.[11]

To date, there has been no reported use of immunomodulatory agents in managing chronic Ebola-related uveitis, and their role is unknown.

The most common surgical intervention to manage the ocular complications of PEVDS is cataract surgery. Due to the high incidence of uveitis, many cataracts in Ebola survivors are extremely dense, increasing the risk of possible complications. An additional risk associated with cataract surgery is the possibility of contact with live virus particles and special care must be taken to avoid direct contact with bodily fluids during surgery.

In 2018, Shantha et al. published a cross-sectional study on 50 EVD survivors planning to have cataract surgery[29]. All patient samples of aqueous humor/vitreous fluid and conjunctiva tested negative for Ebola virus RNA by RT-PCR at 19 and 34 months. The median improvement in visual acuity for those who underwent manual small incision cataract surgery was from hand motions preoperatively to 20/30 post-operatively.

Ocular prognosis related to post-infectious Ebola complications is varied. African patients in endemic regions often present with worse initial visual acuity compared to their American counterparts, likely due to poor access to ophthalmic care.[3][30] Depending on the cause of their decreased vision, visual potential may be limited, especially if long-standing uveitis has caused permanent structural damage. Those whose vision is limited mainly due to cataract may recover significantly after surgery.