Synechiae are adhesions that are formed between adjacent structures within the eye usually as a result of inflammation.

Synechiae are most commonly formed during states of inflammation and cellular proliferation. Patients presenting with synechiae typically have an underlying inflammatory disease process such as uveitis and will present with related symptoms, such as redness, photophobia, and/or decreased vision. The pathophysiology is thought to be related to inflammatory cells, fibrin and protein deposition, which stimulates the formation of adhesions between structures. However, PAS can also be formed in a non-proliferative state. A posterior pushing mechanism can cause apposition of the iris on the trabecular meshwork, which may result in continuous PAS and angle closure. Other causes include trauma, increased intraocular pressure, aniridia, and other developmental abnormalities.

Diagnosis is made with slit lamp examination and with gonioscopy of angle structures. Special attention should be paid to the pupillary margin. 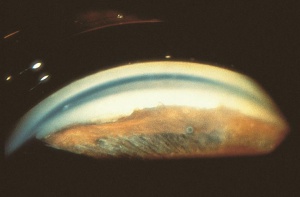 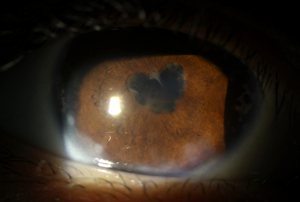 Slit lamp photo of posterior synechiae in a patient with uveitis.

Peripheral anterior synechiae are visualized on gonioscopic examination. Peripheral iris attachments noted anteriorly in the angle, which may extend anywhere from ciliary body to Schwalbe's line and corneal endothelium are important to differentiate from normally occurring iris processes.

Posterior synechiae, if substantial, may affect the movement of aqueous from the posterior to the anterior chamber, a condition known as iris bombe. As pressure builds up posteriorly, the iris may bow forward, resulting in secondary angle closure. Seclusio pupillae occurs when the synechiae extend 360 degrees around pupillary border.

Peripheral anterior synechiae may lead to secondary angle-closure glaucoma if they fuse circumferentially and are typically found inferiorly. PAS are more often found superiorly when associated with primary angle closure. Chronic angle-closure may develop following secondary shallowing of anterior chamber due to traction from PAS, which results in blockage of outflow through trabecular meshwork.