Increase in intraocular pressure is a phenomenon that could present in both aphakic and pseudophakic eyes. In general, the terms are usually applied to the eye post cataract surgery. Given that there are over two million[1] cataract surgeries performed in the US each year, it is important to anticipate a possibility of postoperative glaucoma. However, there are multiple mechanisms, as well as combination of mechanisms, that can lead to increase in the eye pressure and thus a through evaluation of an eye is necessary.

Aphakic glaucoma is referred to a condition that is a known complication which follow congenital cataract surgery in children[2]. Pseudophakic glaucoma refers to the glaucoma following implantation of the lens with cataract surgery. Aphakia or pseudophakia themselves are not the direct causative conditions in the aphakic or pseudophakic patient presenting with glaucoma[3]. There are multiple mechanisms that could be working alone or in synergy, leading to glaucoma in patients with aphakia or pseudophakia. Refer to the sections below for potential mechanisms:

Kirsch characterized the existence of an internal white ridge protruding into the anterior chamber as an inverted snowbank along the ridge of the corneal incision as seen by gonioscopy during and after cataract surgery. The mechanism of the ridge formation is still unclear with some suggesting distortion of the chamber by sutures and others suggesting edema of the corneal stroma to be the cause. The ridge formation is associated with peripheral anterior synechiae, vitreous adhesions and hyphema[4]. It appears that the presence of the ridge has a transient effect on the intraocular pressure, affecting the trabecular meshwork and the aqueous outflow in the eyes[5]. Distortion of anterior chamber angle applies to previous cataract surgery techniques that required much larger incision than today’s modern, small incision cataract surgery. If anything, modern cataract surgery deepens the anterior chamber angle and reduces intraocular pressure[6].

Viscoelastic Substances are used in cataract surgeries primarily to protect the endothelial cells of the cornea and maintain anterior chamber depth for the duration of the surgery. The use of these substances has been associated with increases in intraocular pressure (IOP) post surgically. The most likely mechanism to be implicated in the pressure elevation is a transient obstruction of the trabecular meshwork. There are many different viscoelastic substances that are used, such as sodium hyaluronate (Healon, AMO, Abbott Park, Illinois), combination of sodium hyaluronate and chondroitin sulfate (Provisc and Viscoat, Alcon Laboratories, Inc, Fort Worth, Texas), methylcellulose and others[5]. Dispersive viscoelastics (i.e. Viscoat) have lower viscosity and are harder to remove, and hence are more likely to increase IOP than cohesive ones such as Provisc and Healon.

Some inflammation is an expected postoperative outcome of a cataract surgery. Depending on the extent of inflammation, excessive inflammatory cells may lead to obstruction and fibrosis of the trabecular meshwork. Uveitis-Glaucoma-Hyphema (UGH) syndrome can rarely arise from the rubbing of the lens implant on the iris, leading to inflammation (5). Improperly sized and malpositioned anterior chamber lens implant is usually associated with UGH syndrome although UGH with posterior chamber lens implant placed in sulcus has been infrequently reported as well[7]. Rarely, in the presence of zonular laxity or plateau iris, in-the- bag IOL can still cause UGH[8]. In addition, spontaneous, recurrent hyphema has been reported in eyes with neovascularization of internal corneal wound after cataract surgery (Swan syndrome). 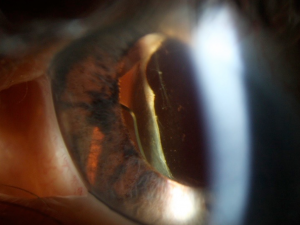 It is common for the variable amounts of pigment granules from the iris epithelium to be released during the cataract surgery. This pigment can lead to obstruction of the trabecular meshwork, thus precipitating the elevation of IOP. Posterior chamber lenses, which are improperly inserted in the sulcus are most commonly associated with the increase of the eye pressure, due to the lens rubbing on the iris and releasing the pigment that then blocks the trabecular meshwork[5]. More recently, there has been number of the cases published featuring eyes with increased pigment dispersion, inflammation, and elevated IOP due to insertion of single piece acrylic into the sulcus. Single piece lens, which is designed to be placed entirely in a capsular bag has unpolished and thicker haptics that can easily cause pigment dispersion, transillumination defects, hyphema and elevated IOP if placed into the sulcus[9].

It was observed that vitreous humor can fill the anterior chamber after a cataract surgery resulting in an acute angle closure glaucoma. Some cases resolve on their own, others require a surgical procedure such as iridotomy or anterior vitrectomy and laser vitreolysis[5].

Flat anterior chamber or presence of inflammation can contribute to the formation of the peripheral anterior synechiae in pseudophakic and aphakic glaucoma. A cataract surgery can lead to a wound leak, which leads to hypotony and choroidal detachment. Those, in turn, lead to decrease aqueous production and a forward shift of iris and vitreous, further contributing to chronic angle closure glaucoma[5].

Alpha-chymotrypsin was used in the intracapsular cataract removal. Due to the changes in the modern cataract surgery techniques, the mechanism of alpha-chymotrypsin is an uncommon contributor to glaucoma in patients[5].

Small nuclear or cortical pieces of natural lens left in the eye following a routine cataract surgery or larger pieces dropped into vitreous after broken posterior capsule during complicated cataract surgery may induce glaucoma. These protein structures are too large to go through trabecular meshwork and they block the outflow and increase the pressure. There is also an inflammatory component contributing to the process.

Use of Neodymium: YAG Laser after cataract surgery has been shown to cause an intraocular pressure increase. The increase in IOP is usually transient, but in some cases becomes a long-term problem. There are multiple risk factors that can contribute to the increase in the eye pressure after the use of the Nd:YAG laser, such as presence of glaucoma or high eye pressure before the surgery, absence of posterior chamber lens, myopia, laser energy used, etc.[5]. The exact mechanism of the IOP increase has not been elucidated, but the majority of cases present with open angle and inflammation that can block the trabecular meshwork[5].

Ghost cells are released as a result of the chronic vitreous hemorrhage in the patients with aphakic eyes. The ghost cells are present in the anterior chamber and the vitreous humor and could settle and obstruct the outflow through the trabecular meshwork. The obstruction then leads to the increase in IOP[3].

In patients with pseudophakia, the incidence of IOP rise went down with an advent of the extracapsular cataract extraction (ECCE) and posterior chamber intraocular lens (PCIOL) implantation. Transient increases in IOP are seen at rates of 29-50% on the first postoperative day in the eyes without pre-existing glaucoma. Chronic glaucoma prevalence in pseudophakic eyes post-surgery was noted between 2.1-4% after the standard extracapsular extraction. Glaucoma was also found in 11.3% of eyes following a secondary anterior chamber extracts[5].

Presentation of glaucoma in aphakic/pseudophakic eyes could be the same as in phakic glaucoma and thus, collection of good patient history is necessary. Some of the ways to evaluate the patient presenting with glaucoma include utilizing gonioscopy, optical coherence tomography, ultrasound biomicroscopy (UBM) and Scheimpflug video imaging[7][8]. Piette et al. have published UBM findings in a series of UGH patients. Eight of total nine study patients had posterior chamber intraocular lens. In 5 cases, UBM showed at least one of lens haptics was in contact with posterior iris pigment epithelium and in remaining, one of the haptics was embedded into ciliary body[7].

Surgeons can choose to reduce the pressure in the eye as part of the pre-operative care. Digital pressure can be applied to the globe. Intravenous hyperosmotic agents such as mannitol can be utilized to reduce the risk of complications.

Caution in the manipulation of the tissues during the surgery as well as meticulous removal of the viscoelastic substances should minimize the risks of glaucoma. An intraocular lens can also have an effect on the outcome, with PCIOL’s being less commonly associated with increases in IOP, than the anterior chamber lenses. Use of adjacent intraoperative anticholinesterase agent Miostat® Alcon laboratories (carbachol) provides pressure reduction in addition to constriction of the pupil (miosis) up to 24 hours after surgery.

Management of postoperative glaucoma will depend on the mechanism causing the increase in IOP. Transient pressure increases in eyes with no pre-existing glaucoma require no treatment. In eyes with pre-existing glaucoma, transient increases in pressure early in post-surgical period can cause damage and thus should be managed with drops such as dorzolamide-timolol, brimonidine or oral acetazolamide. Use of prostaglandin analogs in early post-operative period varies among practitioners due to their inflammatory properties. If IOP is causing significant corneal edema, discomfort, and there is pre-existing glaucoma, anterior chamber tap could be done successfully at the slit lamp by releasing aqueous through existing paracentesis from cataract surgery. Prior to paracentesis, the eye should be prepped with 5% betadine or antibiotic. The aim should be to lower the IOP to high 10s or low 20s rather then returning IOP to single digits. When managing the uveitis, glaucoma, and hyphema syndrome the use of mydriatics or miotic drops in different sequence has been tried to capture the IOL properly but usually, these measurements are not useful. Also, chronic inflammation can cause cystoid macular edema and chronic use of steroid drops associated with elevated IOP can complicate the course of treatment. Therefore, in the presence of chronic pigment dispersion and inflammation in a pseudophakic eye, lens exchange may be warranted.

Pupillary block in an aphakic eye commonly requires iridotomy. For the pupillary block in pseudophakic eye a variety of therapies can be considered ranging from mydriatic therapy to release the block as initial treatment to iridotomy[5]. Ciliary block glaucoma post cataract surgery requires further irido-zonulo-hyaloid-vitrectomy.

Preferred treatment of glaucoma in the late postoperative period is medical including use of carbonic anhydrase inhibitors, prostaglandin analogs, beta-blockers, alpha2-antagonists or miotic therapy. Surgery for glaucoma should be performed only in cases that are unmanageable by medications only.

Role of newer microinvasive glaucoma surgery in treatment of pseudophakic glaucoma is unknown.

Filtration surgery with the use of antimetabolites, such as 5-fluorouracil or mitomycin-C seems to have a better outcome then the filtration surgery alone. Pseudophakia is found to be a risk factor for the failure of trabeculectomy. Conjunctival scarring from earlier techniques of cataract surgery, which involved incision of conjunctiva was presumed for the failure of consequent glaucoma surgery, however, clear corneal incision phacoemulsification also has been contributed to surgical failure of trabeculectomy with anti-metabolite. Takihara et al. reported 4.6 times higher risk of failure in 51 pseudophakic patients who underwent trabeculectomy with mitomycin than risk in 175 phakic patients with mean follow up of about 3 years[11].

Glaucoma drainage devices may be utilized after failed trabeculectomy or as the first line of surgery to treat aphakic and pseudophakic glaucoma. In Tube versus Trabeculectomy versus patients were randomized - Baerveldt 350 mm2 or trabeculectomy with mitomycin C. While aphakic patients were excluded from this study, three-quarters of both study groups was pseudophakic. During the 5-year follow-up, the success rate was higher in Baerveldt group than trabeculectomy and in addition, reoperation rate for glaucoma surgery was lower in Baerveldt group[12]. There may be some advantage inserting tube into the sulcus behind the iris and in front of the IOL in pseudophakic glaucoma to decrease the corneal compromise associated with the tube.

Diode cyclophotocoagulation may be spared for those with advanced disease with poor vision.

In conclusion, aphakic and pseudophakic glaucoma is not uncommon and timely diagnosis and treatment could provide the best outcome to preserve vision and function.