Breast Carcinoma Metastatic to the Orbit

Breast carcinoma metastatic to the orbit 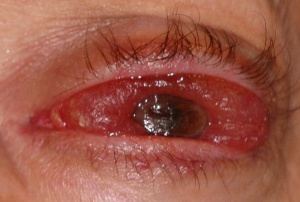 Although breast carcinoma primarily affects women, the risk in men is approximately 1%.[5] In most cases of metastases to the orbit, there is a previous history of breast cancer that has been previously treated or the patient presents with an orbital mass in the setting of active malignancy affecting multiple organ systems.

To date, the basis for breast carcinoma as the most common primary metastatic process to the orbit is unclear. Given the lack of lymphatics in the orbit, hematogenous spread is required for the development of metastasis.[5] Orbital breast metastases tend to preferentially localize within orbital fat or extraocular muscles.[2] Scirrhous infiltration of the orbit can also occur, resulting in enophthalmos. Approximately 10% of patients with breast carcinoma metastatic to the orbit present with enophthalmos.[2][4]

Early diagnosis of the primary malignancy with patient education, identification of risk factors, and periodic examinations with mammography.

The diagnosis of metastasis to the orbit is suggested by clinical history, ophthalmological examination, and imaging studies, and is confirmed by biopsy.

Orbital imaging with CT or MRI is helpful in guiding the biopsy in order to determine the appropriate surgical approach and to minimize injury to vital orbital structures. Almost all orbital metastases evaluated with MRI show some degree of enhancement with contrast agents. Breast carcinoma metastatic to the orbit tends to localize in the orbital muscle and fat (both intraconal and extraconal).[2][7] Orbital metastases from breast cancer tend to be diffuse and irregular, often growing along the rectus muscles and fascial planes.[7] When orbital bone is involved, metastatic breast carcinoma tends to be destructive in nature rather than hyperostotic.[8] 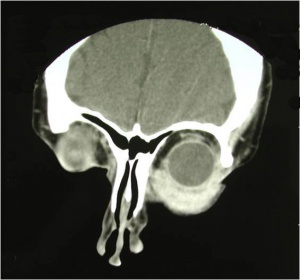 Mammography in the absence of prior history of neoplasm should also be considered.

A history of a progressive course of symptoms with possible motor and sensory deficits is often elicited. A thorough medical history should be obtained for possible history of known breast cancer, or symptoms suggestive of systemic malignancy.

A complete eye exam, including assessment of ocular motility, orbital palpation, and exophthalmometry, as well as palpation of regional lymph nodes, including axillary and supraclavicular lymph nodes, should be performed. 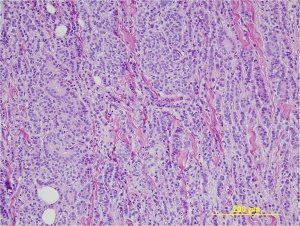 Orbital biopsy specimen from a patient with metastatic breast carcinoma to the orbit demonstrating cords and strands of neoplastic cells in a single file arrangement and focal ductular differentiation surrounded by areas of fibrotic stroma (hematoxylin-eosin, original magnification x200).

The diagnosis is confirmed by obtaining an open orbital incisional biopsy and examining the histopathology. Immunohistochemical evaluation of the orbital biopsy specimen for estrogen and progesterone receptor and oncoprotein expression is important not only for diagnostic purposes but also in guiding treatment plans. The hormone receptor status in metastatic lesions may vary from that seen in the primary malignancy. 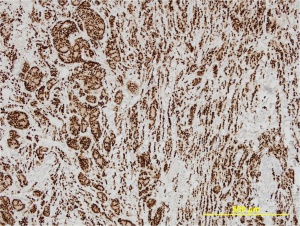 Given that 54% of patients with orbital breast metastases present with infiltrative or inflammatory signs, metastatic breast carcinoma must be included in the differential diagnosis of inflammatory and infiltrative orbital processes encountered in adult female patients.[6]

Orbital metastases originating from breast carcinoma predicts widespread metastatic disease in other organs. Patients require a systemic workup to evaluate for metastases to other organ systems, and a multidisciplinary team including oncology, radiation oncology, and ophthalmology are necessary. Systemic treatment of metastatic breast cancer may include some form of hormone therapy and/or chemotherapy depending on the overall disease burden.[11]Enucleation offers no advantage concerning disease progression or survival.[2] [12]

External beam radiotherapy to stabilize the orbital metastatic lesion is the mainstay therapy, and is usually administered to control tumor growth, preserve visual function in the short term, decrease proptosis and exposure keratopathy, or to improve patient comfort.[2] Dramatic improvement in orbital symptoms, including recovery of vision when impairment is secondary to orbital mass effect, has been reported in many series.[1][13] This treatment is usually delivered in several fractions with different fields of applications and globe protection with a shield to reduce complications.[8]

Exposure keratopathy secondary to orbital metastases may be managed with aggressive lubrication with artificial tears and ointment, with consideration for a temporary or permanent tarsorrhaphy in cases that fail conservative measures.

Orbital surgery is primarily used for diagnostic rather than therapeutic purposes given that the disease is usually widespread at time of diagnosis and is not curative. Surgery may be used in palliative management of some patients in whom other treatments have failed. In selected cases, tumor resection, even if incomplete, may be appropriate to improve symptoms of pain, diplopia, and proptosis.