Enucleation is the surgical procedure that involves removal of the entire globe and its intraocular contents, with preservation of all other periorbital and orbital structures. Enucleation is in contrast to evisceration, in which the ocular contents are removed from an intact sclera, and exenteration, in which the entire orbital contents, including the globe and soft tissues, are removed.

The surgical removal of the eye was first reported in the 1500s as a procedure known as extirpation.[1]   Unlike an enucleation, the conjunctiva and extraocular muscles were not spared.  By the mid 1800s, an enucleation  without implant placement was described in the literature. The first reports of implant insertion following enucleation were described in 1886 and 1887, with variable success in implant retention.[1]

The following are indications for enucleation:

The role of primary enucleation in acute trauma remains controversial, particularly when a patient's mental status may be altered or he is unable to consent. Many surgeons advocate for primary closure of an open globe with later consideration for an enucleation if the eye remains no light perception or is severely disfigured. Enucleation of an eye can be associated with significant psychological trauma, and this approach provides the patient to consider his options and the pros and cons of enucleation after the initial trauma and any altered mental status has resolved and provides autonomy to elect this operation in the future. The risk of sympathetic ophthalmia in the uninvolved eye must be considered and discussed with the patient. In select cases where the eye is determined to have no visual potential, when repair or at least primary closure of the globe is determined to be impossible, and/or the medical comorbidities of the patient are significant, the surgeon may elect to perform primary enucleation.

In contrast to evisceration, enucleation allows for histologic examination of an intact globe and optic nerve. This is particularly important in settings of biopsy-proven or suspected intraocular malignancy, in which it is essential to determine the margins of the malignancy and invasion of the optic nerve, if any.

When comparing the aesthetics of an enucleated socket to an eviscerated socket, one retrospective study showed no statistically significant difference between enucleation and evisceration patients graded by both patients and masked observers.[2]

In a 2003 survey of all board-certified ocularists in the United States, 92% reported preferring evisceration to enucleation for a patient who required removal of the eye.[6] Eighty-two percent of survey respondents believed that evisceration afforded the best ocular motility and best overall cosmetic outcome, and 94% percent believed that complications of enophthalmos and/or deep superior sulcus were more common after enucleations.

An enucleation is often performed as an outpatient procedure under general anesthesia. A retrobulbar block of local anesthetic with epinephrine  is administered to aid in hemostasis and postoperative pain management. After a time-out is performed to confirm the correct operative eye with the entire operating room team, the face is prepared and draped in sterile fashion. A limbal conjunctival peritomy is performed with Wescott scissors for 360 degrees. Blunt dissection in the sub-Tenon's plane is then carried out in each of the oblique quadrants. Each rectus muscle is then identified, isolated with a muscle hook, secured with suture, and cut at the insertion to the globe. The superior and inferior oblique muscles are isolated and generally transected, though some surgeons prefer to tag these as well. Conversely, some surgeons prefer to secure the muscles with suture after the eye has been removed.[7]

Figure 2: Identification, strumming, and severing of the optic nerve and insertion of the implant.

An implant is then placed in the intraconal space to replace volume lost by the enucleated globe, achieve cosmetic symmetry with the fellow socket, and allow for motility of the prosthesis. To determine appropriate diameter of the implant, use of the formula axial length-2 mm has been shown to provide for adequate replacement of lost volume and minimize superior sulcus deformity and enophthalmos.[8] A sizing set can also be used to determine the appropriate size intraoperatively. 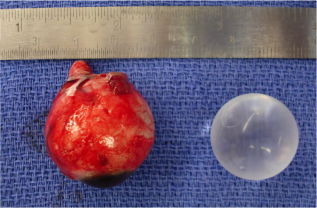 Figure 3: Sizing of the implant. 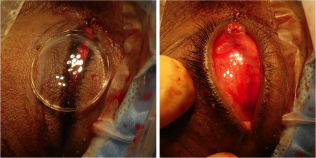 Figure 4: Sizing of the conformer.

In certain circumstances including severe infection, a surgeon may choose not to place an implant at the time of enucleation and elect to place an implant in a second surgery. The extraocular muscles are generally attached to each other anterior to the implant or sutured directly to a porus or wrapped implant. A two-layered closure is then carried out with absorbable sutures, first of Tenon’s capsule and then of the conjunctiva. Antibiotic ointment is applied, a clear plastic conformer is placed over the closed conjunctiva, and a pressure patch is placed over the socket. A temporary tarsorrhaphy may be placed.

There are several types of implants that may be utilized in an enucleation. Implants are made in distinct sizes, and intraoperative selection of the appropriately sized implant is determined by the size of the patient’s orbit and the size of the implant necessary to achieve symmetry with the fellow eye. Implants may be porous or nonporous. Porous implants allow for anchoring of the extraocular muscles with proliferation of fibrovascular tissues into the implant itself. These include hydroxyapatite, porous polyethylene, and proplast.

Figure 5: (a) Identification of the four rectus muscles, (b) Wrapping of donor sclera around an implant, (c) Suturing the extraocular muscles to the sclera-wrapped implant, (d) Closure of the conjunctiva

Hydroxyapatite implants were first introduced in 1989.[9] Because of their rough surface, they are typically wrapped with material such as donor sclera, acellular dermis, or pericardium. Additional wrapping materials include autologous tissue grafts, such as temporalis fascia or fascia lata and synthetic meshes. The extraocular muscles may be then sutured to the wrapping material for enhanced motility of the implant. Porous polyethylene implants were later developed as an alternative to hydroxyapatite. They have a smoother surface and do not require wrapping. Other advantages of porous polyethylene over hydroxyapatite implants include cheaper cost and ability to suture the extraocular muscles directly to the implant.[3]

Nonporous implants do not allow for proliferation of tissues into the implant. Therefore, they may have decreased motility and greater risk of implant migration, yet several studies indicate no problems with implant migration with appropriate technique. [13][14]Types of nonporous implants include glass, silicone, acrylic, and polymethylmethacrylate (PMMA).[3] The rectus muscles still may be sutured over the implant to impart motility to the implant and prosthesis, or suture to a wrapped material.

In a survey published in 2004 of active members of the American Society of Ophthalmic Plastic and Reconstructive Surgery (ASOPRS) regarding management trends and preferences in primary enucleations and eviscerations, the most popular and commonly used implant was porous polyethylene in 43% of cases, followed by hydroxyapatite (27%) and nonporous implants (20%).[15] The most commonly cited rationale for implant choice was outcome. Pegs were utilized in only 8% of cases. A majority of implants were not wrapped, but, of those that were, donor sclera was the most commonly utilized wrapping material.

Patients are typically patched for a brief period postoperatively and instructed to return to clinic one week after the procedure. Prescriptions are given for analgesics and antiemetics.  Some surgeons also elect to prescribe prophylactic antibiotics, although there is no evidence that antibiotics reduce the risk of implant infection.[16][17][18]

Once the conjunctiva closure has healed, generally about 4-8 weeks postoperatively, patients are referred to an ocularist for fitting of an ocular prosthetic fitting. Patients will require regular follow up with both an oculoplastic surgeon and an ocularist to maintain the health of their socket.

Complications of an enucleation include the following:

Figure 7: Exposure of PMMA, porous polyethylene, and hydroxyapatite implants (from left to right).

Thank you to Oculoplastics Associates of Texas, Dallas, TX for providing article images.