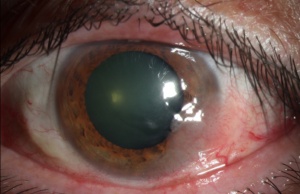 According to epidemiology studies, the prevalence of OSSN is estimated to range from <0.2 cases/million/year (UK, 1996) to 35 cases/million/year (Uganda, 1992).[3] [4] In several series, CIN has been reported to be the most common conjunctival neoplasia, whereas SCC has been found to be the most common conjunctival malignancy.[5] In the western hemisphere, OSSN afflicts mainly Caucasian men in their 60s to 70s who live close to the equator.[6] However in Africa and certain parts of Asia, OSSN afflicts younger patients and tends to be more clinically aggressive.[5][7] A similar pattern has been observed in patients with the human immunodeficiency virus (HIV) and xeroderma pigmentosum.

The etiology of OSSN appears to be multifactorial, and likely involves a variety of environmental factors in a susceptible host. In addition to the proposed etiologies discussed below, smoking, light hair and skin, xerophthalmia (Vitamin A deficiency) and exposure to petroleum products have been implicated in the pathogenesis of OSSN.[1]

It is well recognized that the prevalence of OSSN is increased in populations that live within 30- degrees latitude from the equator.[5] [6] In addition, OSSN is more common in Caucasians with light complexions and patients with xeroderma pigmentosum, a genetic condition that increases susceptibility to DNA alterations secondary to UV light.[8] Furthermore, ocular lesions are most commonly located within the sun- exposed interpalpebral fissure, specifically in the nasal or temporal zones.[1] Despite the evidence, it is unclear why UV light, a common environmental exposure, results in OSSN in some patients but not others. It is likely that it acts as a cellular insult in an already susceptible host.

In Africa, studies have shown an HIV infection rate as high as 79% in patients with OSSN compared to 14% in the general population.[9] In the United States, a study done at Bascom Palmer Eye Institute found that OSSN may be a possible marker for undiagnosed HIV. [5] The study found that half of patients diagnosed with OSSN under the age of 50 were seropositive for the virus.[5]. Both HIV 1 and 2 have been implicated.

The association of HPV with OSSN remains unclear. Although some studies have shown a clear association of OSSN with HPV, other studies have not. [10] [11]Whereas HPV 6,8, and 11 have been linked with benign conjunctival epithelial lesions, HPV 16 and 18 have been associated with malignant neoplastic lesions.[1] However, HPV status does not appear to correlate to treatment response.

Mutations of p53, a tumor suppressor gene, are thought to be the most common genetic anomalies in human malignancies. [1] Some have hypothesized that HPV or UV-B may alter p53, resulting in the  development of OSSN in susceptible individuals.[7] 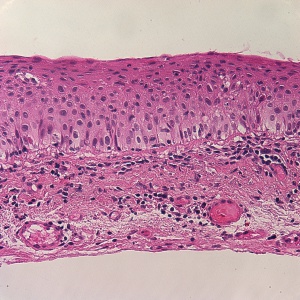 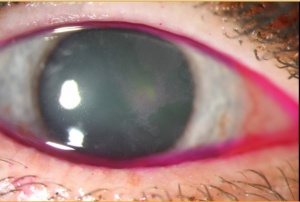 The clinical presentation of OSSN is variable, making diagnosis sometimes difficult. Typically, patients present with a gelatinous or plaque like interpalpebral conjunctival gray or white lesion.[7] Approximately 95% of CIN lesions occur at the limbus, where the most actively mitotic cells reside.[1] The lesion may be flat or elevated and may be associated with feeder vessels. Fluorescein, lissamine green, or Rose Bengal are often used to highlight the lesion (Figure 3).[2] Abnormal or dysplastic epithelium have a diffuse, granular appearance, differentiating it from normal epithelium.[1]

The onset of the lesion, whether the lesions represents a recurrence, and prior treatments dictate tumor management. Major breakthroughs in the diagnosis and clinical approach of this disease has occurred within the past 2 to 3 decades.[6] There has been an increasing trend towards employing medial therapy over surgery.

The use of topical chemotherapeutic agents, including Interferon-α2b, mitomycin C, and 5- fluorouracil, has the advantage of treating the entire ocular surface and avoiding surgical complications such as positive margins, scarring, and limbal stem cell deficiency.

A no touch technique is used during excision of OSSN lesions. CIN and SCC lesions involving the limbus should be excised with at least a 3-4mm uninvolved conjunctival margin. A large conjunctival margin is important since seemingly uninvolved tissue clinically may still contain dysplastic cells. Absolute alcohol is then applied to the cornea to loosen the epithelium from the basement membrane, and then rinsed off with copious irrigation after 30 to 40 seconds. All involved corneal epithelium and any associated corneal pannus is then scraped off with a Beaver blade or surgical sponge after instillation of absolute alcohol to loosen the cells.[2] It is very important that the underlying Bowman’s layer is not violated during this process. Using a double or triple rapid freeze- thaw technique, cryotherapy is applied to the conjunctival edges, involved limbal zone, and the bare scleral bed to kill any remaining dysplastic cells.[1] Cryotherapy is very important since it effectively extends the surgical margins.  If the margins return positive or there are any concerns for residual disease, topical chemotherapy may be used after excision. Both epithelial dysmaturation and corneal epithelial dysplasia are considered benign lesions, and are treated with corneal scraping and wide conjunctival limbal margins if involved.  In cases of SCC, a thin lamellar scleral flap after the removal of the conjunctival lesion is advised followed by application of absolute alcohol to the scleral bed.[2] The area of surgical resection may be left open or closed with amniotic membrane graft.[2] In cases of local invasion into the eye or orbit, enucleation and exteneration may be done in collaboration with an oculoplastics surgeon.[1] Sentinel node biopsy may also be appropriate to stage the disease.[1] Radiation may be considered as adjunctive therapy in certain cases that have been recalcitrant to other modalities of treatment.

A recurrent OSSN can grow rapidly and be more invasive, and thus needs to be treated with aggressive medical, surgical, or combination therapy.[1] The conjunctival lesions that tend to fare the poorest involve over half of the limbal stem cells.[1] Overall, SCC is generally associated with local invasion rather than wide- spread systemic metastases.