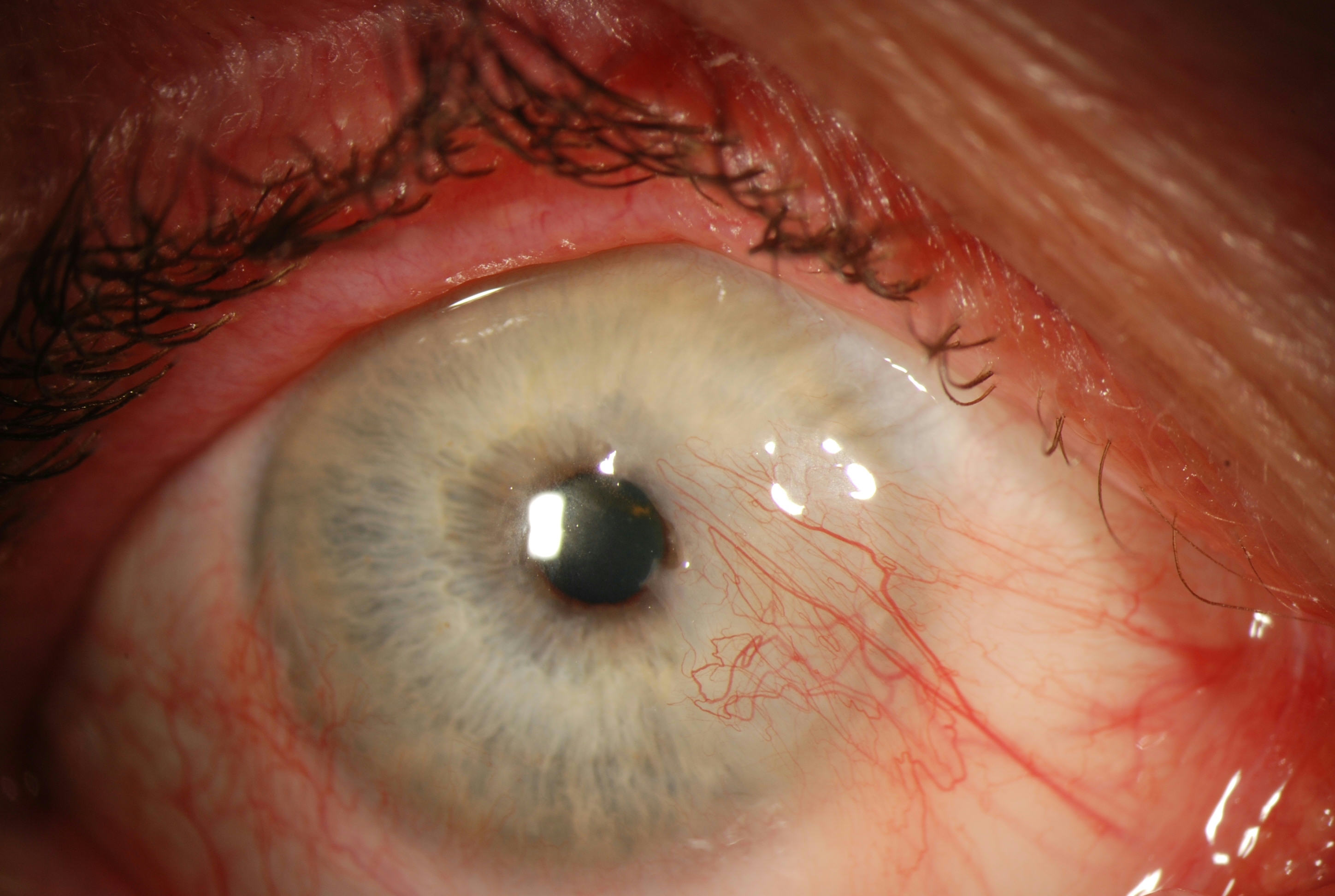 Pterygium, from the Greek pterygos meaning “wing”, is a common ocular surface lesion originating in the limbal conjunctiva within the palpebral fissure with progressive involvement of the cornea. The lesion occurs more frequently at the nasal limbus than the temporal with a characteristic wing-like appearance.

The pathogenesis of pterygia is highly correlated with UV exposure. An increased incidence is noted in latitudes nearer the equator and in individuals with a history of increased UV exposure (outdoor work). Some studies have shown a slightly higher incidence in males than females, which may only reflect a higher rate of UV radiation.

Histologically, pterygia are an accumulation of degenerated subepithelial tissue which is basophilic with a characteristic slate gray appearance on H&E staining. Vermiform or elastotic degeneration refers to the wavy worm-like appearance of the fibers. Destruction of Bowman layer by fibrovascular ingrowth is typical. The overlying epithelium is usually normal, but may be acanthotic, hyperkeratotic, or even dysplastic and often exhibits areas of goblet cell hyperplasia. 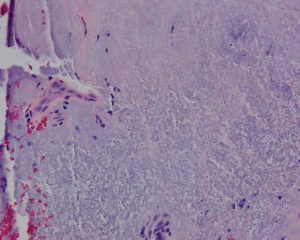 The large number of theories that exist to explain the pathogenesis of pterygium growth underscores the uncertainty of the etiology. The increased prevalence in hot dry climates and regions nearer to the equator suggest a role of environmental factors such as UV radiation and dryness. Actinic changes seen on histopathology similar to actinic keratoses on the skin also supports the role of UV radiation. It has been suggested that radiation activated fibroblasts may result in excessive production of material resulting in pterygia. Other proposed theories include choline deficiency, inflammation, disregulation of angiogenesis, immune system abnormalities, tear film abnormalities, as well as the possible role of a viral stimulus.

Coronea MT proposed that pterygium occur due to albedo concentration in the anterior eye (albedo's hypothesis). Light entering the temporal limbus at 90 degree is concentrated at medial limbus and this is responsible for predominance of medial pterygia.[3]

As UV radiation is believed to play an important role in the pathophysiology, avoidance of UV exposure is important to primary prevention. Ocular surface lubrication may also help.

The diagnosis is made by slit-lamp examination of the wing-shaped limbal growth at the characteristic location within the palpebral fissure. The diagnosis is most often clear clinically, but histopathologic confirmation is performed routinely, as there can be associated dysplasia of the overlying tissue.

High resolution anterior segment optical coherence tomography can be used to differentiate pterygia from ocular surface squamous neoplasia (OSSN). In pterygia, the epithelium is of normal thickness with underlying sub epithelial fibrosis. In comparison in OSSN, the epithelium will appear thickened and hyper-reflective with an abrupt transition from normal epithelium[4].

A complete eye exam should be performed on all patients with apparent pterygia focusing on assessment of visual and refractive impact as well as the exclusion of less common alternate diagnoses.

The diagnosis of pterygium is based on the clinical appearance of the lesion. Typical findings include

It is unusual for pterygia to deviate from the characteristic locations of three and nine o’clock within the palpebral fissure. Pterygioid lesions in other locations should elevate suspicion for alternate diagnoses.

Though frequently asymptomatic, pterygia can become inflamed and cause ocular surface irritation. Many patients will disclose their dislike of the appearance of the pterygium when questioned directly. As the lesion progresses, vision may be affected by induction of astigmatism or obscuration of the visual axis.

Diagnosis is based on the typical clinical appearance. Presence of leukoplakia, pigmentation, irregular feeder vessels, atypical elevation, and rapid growth should increase suspicion for malignancy.

Assessment of visual acuity, changes in manifest refraction, and corneal topography can aid in determining the visual impact of pterygia. Histopathologic confirmation is routine for excised lesions and can be important in ruling out malignancy. The prevalence of concurrent ocular surface squamous neoplasia within surgically excised pterygia varies from 1.7% in South Florida to as high as 9.8% in Australia[5][6]. A higher index of suspicion for concurrent malignancy is required for patients living in areas with higher UV index.

A number of potential therapeutic options exist for the management of pterygia ranging from conservative management with lubrication to surgical excision with conjunctival autografts. Due to the potential for recurrence of a more aggressive lesion, as well as other surgical risks, the surgical removal of pterygia should not be undertaken casually. Surgical excision is indicated if it is causing persistent irritation resistant to medical therapy, obscuring visual axis or causing blurry vision from induced astigmatism, increasing in size, or restricting ocular motility.

Inflamed pterygia may cause irritation, foreign body sensation, and tearing which, in many cases, can be alleviated with over the counter vasoconstrictor drops, lubricating drops and ointments. Short courses of topical corticosteroids can be used to reduce inflammation, though long term use is not recommended.

Initially, the corneal extension of the pterygium should be measured and followed every 1 to 2 years to determine the rate of growth toward the visual axis.

Simple excision with bare sclera or conjunctival closure will result in a recurrence rate as high as 80% and is now considered unacceptable.

Topical steroids are often utilized in the initial postoperative period. Patients should be followed to monitor for recurrence. 97% of all recurrences occur in the first year after surgery.

Recurrence rate can be as low as 1 in 1000 depending on surgical approach. Defects in Bowman layer often result from surgical excision due to the involvement of Bowman layer by the lesion, and mild residual astigmatism may be present despite successful surgery. Visual prognosis is typically very good and only limited by the cornea if the excised lesion involved the visual axis.