Pyogenic granuloma (PG) is a common benign vascular proliferation. They may appear as smooth, red-purple, sessile or pedunculated lesions most commonly on skin or subcutaneous tissue. They do not have potential for malignant transformation, but often recur.

This disease was first recognized by Poncet and Dor in 1897 as a “botryomycosis hominis”. It has since been known by a variety of names including lobular capillary hemangioma, granuloma pyogenicum, and granuloma telangiectaticum.[1][2][3]

Pyogenic granulomas are typically seen in the classic polypoid form, but can be divided into other subtypes including dermal, subcutaneous, intravenous, eruptive, and associated with satellites, though these are histologically similar. Risk factors include trauma, pregnancy, medications, and can be found in association with Sturge-Weber syndrome. Causative medications include retinoids, antiretrovirals, and anti-neoplastics.[4][5]

There is no ethnic or gender preferences, though they are more common in younger patients.[6]

Although the cause of pyogenic granulomas is unknown, it is postulated that angiogenic dysregulation plays a crucial role in its development. With tissue injury, there may be activation of a neovascular pathway involving FLT4 and the nitric oxide pathway[7] which is evident by increased endothelial nitric oxide synthases.[8] There often is overexpression of VEGF, mutations in BRAF and RAS, as well as development of tumorigenic transcription factors including P-ATF2 and STAT3.[9] With mutations in RAS, it has been suggested that the MAPK/ERK pathway is further affected, thus promoting cell proliferation.[10]

On gross examination the specimen appears as a fleshy, red hemorrhagic, polypoid or pedunculated nodule. Histologically, pyogenic granulomas appear with lobular vascular proliferations and branching endothelium-lined vessels with inflammation and edema resembling granulation tissue. The overlying epidermis may show ulceration if the lesion has bled and has acanthosis, hyperkeratosis, and hypergranulosis. In mature lesions, a fibromyxoid stroma divides the pyogenic granuloma into lobules.[13] In a regressing pyogenic granuloma, extensive fibrosis can be observed.[13]

Relevant immunohistochemical stains are directly related to its vascular origin, thus PG would be positive for CD34, CD31, Factor VIII, SMA, while negative for HMB-45, which would differentiate the lesion from melanoma.[14] 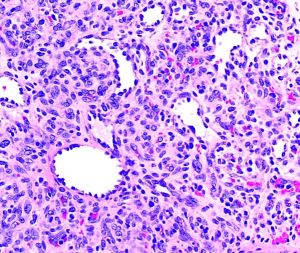 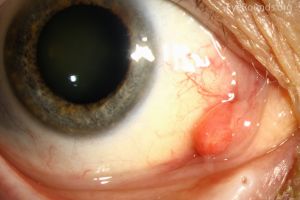 Some discomfort or irritation may be felt depending on location of the PG. The lesion will bleed with very little trauma.

Preliminary diagnosis may be made based on history and clinical appearance. Definitive diagnosis depends on histopathologic exam of a lesion after biopsy.

Various management techniques have been proposed for pyogenic granuloma. Surgical approaches can include excision, curettage and cauterization, shave excision with laser, and blunt removal with chemical cauterization. Given the possibility of malignancy, surgical excision is preferred as it allows an optimal cosmetic outcome and yields a specimen for pathologic examination.[1]

In lesions that occur during pregnancy, it is recommended to wait until the postpartum period due to high rates of resolution as well as recurrence given intervention.[16]

If untreated, pyogenic granulomas may eventually spontaneously regress and atrophy. Among the various management techniques, surgical excision and cryotherapy have the lowest rates of recurrence at 2.94% and 1.62% respectively. However, given the extension of vasculature within the dermis, recurrence is common.[1] It can rarely recur with surrounding satellite lesions, termed Warner and Wilson-Jones syndrome.[17]