Traditionally, the second stage of the procedure, severance of the flap, occurred 3 to 4 months after the initial stage. In 1989, Silkiss et al through analysis of a rabbit model and in vivo evaluation determined that the flap could be severed as early as one week.[4] Now, the standard time to flap division is frequently 2 weeks, depending on surgeon preference, patient comorbities, and convenience. This second stage involves separating the flap at the new lower eyelid margin and opening the eyelids.[3][4] Some authors advocate that division at 7 days can still lead to a good functional and aesthetic outcome.[5]

The modified Hughes procedure includes sparing of the marginal upper lid tarsus and removal of the levator muscle aponeuorsis from the tarsoconjunctival flap.[3][6] This greatly reduces the rate of upper lid complications, such as upper lid retraction, trichasis, and entropion.[3][7] The Hughes procedure is not the procedure of choice in monocular patients needing lower eyelid reconstruction on their seeing eye as it leads to temporary visual obstruction.[3]

The Hughes procedure differs from the Hewes flap, another technique used to repair lower eyelid defects. The Hewes flap was first described by Eva Hewes in 1976 and is a one-stage technique to reconstruct the lower eyelid using a tarsoconjunctival flap transposed from the upper eyelid and hinged at the lateral canthal tendon. An advantage of the Hewes flap is that occlusion of the eye is unnecessary.[8] 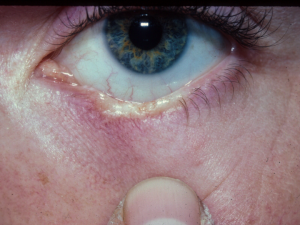 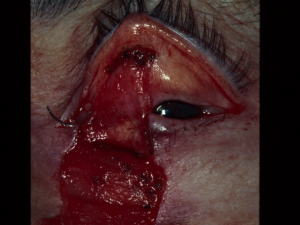 A mobilized tarsal-conjunctival flap is rotated inferiorly into the lower eyelid defect and sutured in place.  The anterior lamellae of the lower eyelid has been mobilized for a cutaneous advancement flap. Courtesy of Dr. Rona Z. Silkiss

Adopted from the AAO Basic Techniques of Ophthalmic Surgery (2015)[1]

1.    Under intravenous sedation, a 50:50 mixture of 2% lidocaine with 1: 100,000 epinephrine, 0.5% Marcaine with 1:200,00 epinephrine, sodium bicarbonate, and hyaluronidase is infiltrated into the upper and lower eyelids via the conjunctival surface.

2. The patient is prepped and draped in the usual sterile fashion.

3. A 5-0 silk suture is placed through the central upper lid margin.   A Desmarres retractor is used to evert the upper eyelid.

4.  A 15 blade is used to incise the conjunctiva and tarsus.  This incision should begin approximately 3-4 mm above the eyelid margin and extend parallel to the upper eyelid margin.  The length is determined by the horizontal extent of the lower lid defect to be repaired.  Care is taken to provide for adequate horizontal tension to avoid post-operative buckling.

5.  The #15 BP blade is used to extent the cuts vertically superior to the superior edge of tarsus on both sides of the original horizontal incision.

6.  The flap is elevated using forceps and blunt dissection is performed with the Colorado blade of the monopolar cautery to separate the tarsal-conjunctival flap from the underlying tissues.

7.  Steven scissors are used to extend the conjunctival incision to the superior fornix, dissecting Muller’s muscle off the conjunctiva as best as possible.

8.  The Desmarres retractor is removed.  The mobilized tarsal-conjunctival flap is rotated inferiorly into the lower eyelid defect.  The superior border of the tarsus should be flush with the remaining lower eyelid margins on either side.

10.  The anterior lamella of the lid can then be created by:

11.  Prophylactic antibiotic ointment is placed on the incision at the close of the procedure and up to twice times until the sutures dissolve or the flap severed.

12.  Separation of the eyelids takes place generally anywhere beyond 2 weeks after the first stage of the procedure.  This is done by cutting across the flap at the level of the intended lower eyelid margin beveling the scissor to avoid future conjunctival creep onto the anterior surface of reconstructed eyelid. 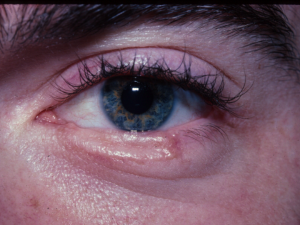 The Hughes procedure has high functional and aesthetic success. In a recent study by Hishmi et al, surgical success, defined as normal lid function and satisfactory cosmesis without the need for additional surgery was achieved in 39 of 45 cases (87%).[3]

In summary, the Hughes procedure should be considered for any full thickness lower eyelid defect involving a significant portion of the lower eyelid margin.

Video of Hughes flap from Dr. Richard Allen, MD, PhD, FACS at the University of Iowa.