Arlt's triangle is a clinical sign indicative of granulomatous uveitis. 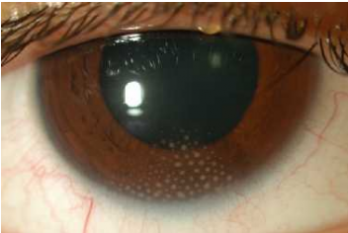 KPs distributed in a triangle-shaped area on the inferior cornea

Arlt's triangle is a distribution pattern of mutton-fat keratic precipitates, which deposit as an inverted triangle on the central to inferior cornea , forming a wedge-shaped region on the inferior corneal endothelium. The white-yellowish greasy precipitates of inflammatory cells (macrophages and epithelioid cells) are clumped in triangular fashion in the lower part of the anterior chamber due to gravity and convection current. It is a clinical sign characteristic of granulomatous inflammation in the anterior chamber and is commonly found in several types of anterior uveitis. Arlt’s triangle distribution is a general finding and not suggestive of any specific uveitis etiology.

Arlt's triangle is named after Carl Ferdinand Ritter von Arlt (1812-1887) , an Austrian ophthalmologist who was also the first physician to prove that myopia is a consequence of excessive axial length of the eye. 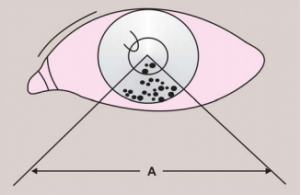 Arlt distribution is caused by convection currents within the anterior chamber and the cooler temperature in the inferior cornea. The larger granulomatous KPs will pigment and then shrink as inflammation abates or is controlled by steroid therapy. They often fail to disappear completely, and they may alter the endothelium where they rest, leaving a halo on the endothelium. 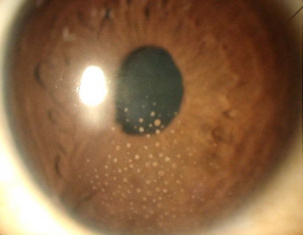 Granulomatous KP (keratic precipitates) plastered on the back surface of the cornea.

However, in some cases, this collection of sticky inflammatory cells on the central and inferior cornea is so large in size, that it's visible with the naked eye. 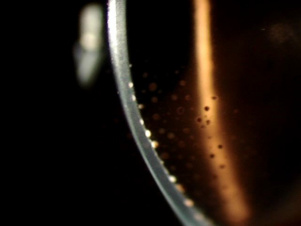 Artl's triangle is suggestive, but not pathognomonic, of granulomatous inflammation. Differential diagnosis should also include unusual chronic inflammatory conditions including :

Cycloplegia : Use a long-acting cycloplegic agent, such as cyclopentolate or homatropine, to relieve both pain and photophobia (if present) and to prevent the formation of posterior synechiae. However, this may not always be necessary in chronic disease, especially if the inflammation is well controlled. In any case, allowing for some pupil movement is helpful to prevent posterior synechiae formation in the dilated position.