Lyme disease is a multisystem infection caused by the spirochete Borrelia burgdorferi which is typically transmitted through the Ixodes tick, the same carrier of the Babesia protozoa.The typical season outbreaks occur during summer and autumn. The animal reservoirs include rodents, deer, birds, cats and dogs. The Ixodes ticks have three stages during their two year life span. During the first stage they are considered larvae and feed typically on the white-footed mice in the spring and summer, evolving later on into a nymph. During the next year the nymphs continue to feed on the white-footed mice and in late summer of their second year mature into adults. The adults attack larger hosts such as deer, cattle, or humans.

Borrelia burgdorferi is a spiral (spirochete) microorganism ranging from 20- 30 μm long and 0.2 to 0.3 μm wide. The microorganisms have a variable number of flagella (usually from 7 o 11) that make them highly capable for movement. This microorganism can be isolated from culture, but it takes a complex medium to do so; such as a Barbour-Stoenner-Kelly (BSK II) enriched with rifampin, fosfomycin and amphotericin B, to prevent contamination. It is usually easier to isolate the bacteria when the samples are taken from the erythematous lesions. 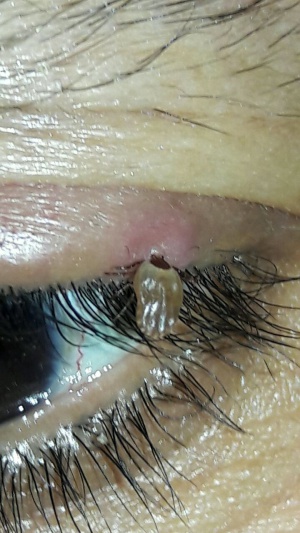 The infection occurs when there is human contact with the infected Ixodes tick and injects its salivary secretion into the human transmitting the spirochete. The microorganism adheres itself to the proteoglycans in the host cell through glucoseaminoglycans that are present in the ''Borrelia''. After the injection, there is a lymphatic or hematologic dissemination of the bacteria to other skin regions, the musculoskeletal system and other internal organs.

Tick repellent spray may be helptful

There may be a history of exposure to endemic areas or wilderness exposure.

After an incubating period ranging from 3 to 32 days, a classic erythema migrans occurs at the site of the tick bite. It starts as a red macula or papule that expands slowly to form a large circular lesion. As the lesion expands and increases in size, it often develops a bright red outer border and central clearing, creating the classic target-like (bull’s eye) rash. The center of the lesion can become indurated, vesicular or necrotic. Even though the rash may start anywhere in the body, the usual places for the rash to begin are the thigh, groin, and armpits. It is important to mention that nearly 20% of patients do not exhibit the classic target-like lesion.

In the USA it is common the B. burdorferi spread mainly hematogenously to many sites within days or weeks of the primary infection. In these cases, patients may develop secondary annular skin lesions far from the infection site accompanied by severe headache, mild stiffness of the neck fever, chills, migratory musculoskeletal pain, arthralgias without joint swelling, and profound malaise and fatigue.

If left untreated, approximately 15% of patients in this particular stage of the disease may develop neurologic involvement, such as meningeal irritation without pleocytosis, meningitis, encephalitic signs, cranial neuritis, motor or sensory radiculoneuropathy, peripheral neuropathy, mononeuritis multiplex, cerebellar ataxia or myelitis.

Likewise, if left untreated between 4 to 10% of patients may develop cardiac involvement such as auricular-ventricular block (of any degree), acute myopericarditis, left ventricular dysfunction, cardiomegaly or pericarditis.

If left untreated, several months after the onset of infection, 60% of patients develop frank arthritis. The typical pattern involves intermittent attacks of oligoarticular arthritis in large joints (especially the knees), lasting weeks to months in the selected joint.

If a sample is taken from the swollen joint, the usual findings are WBC counts between 500-110,000/μL, consisting mainly of polymorphonuclear leukocytes. Tests for rheumatoid arthritis or antinuclear antibodies are usually negative. If a synovial biopsy is taken the typical findings are fibrin deposits, villous hypertrophy, vascular proliferation, microangiopathic lesions, and a heavy infiltration of lymphocytes and plasma cells.

The ocular findings vary upon the stage of the disease.

The most common presentation is a follicular conjunctivitis, in approximately 11% of patients; and less commonly as an episcleritis.

Neuro-ophthalmic manifestations include multiple cranial nerves (II, III, IV, VI and most commonly VII), unilateral or bilaterally, presenting one and the other, or simultaneously. It is common that the patients develop a a bilateral facial paralysis. The optic nerve can be found with signs of optic neuritis, papilledema and papillitis.

The most common ocular manifestation in this stage is keratitis, and much less common episcleritis. These may present months to years after the primary infection. The usual presentation is a bilateral, patchy, focal, and stromal; or subepithelial infiltrate with no clear borders. The keratitis has been thought to be an immune response reaction rather than an infections process, due to the fact that there is good clinical response with the use of topical steroids alone.

Variable according to disease stage

Variable according to disease stage

Besides the clinical characteristic findings (erythema chornicum migrans is diagnostic), diagnosis is confirmed with serologic data such as an ELISA test for IgM and IgG (which peak during the first month) followed by a Western blot test. The CDC recommends a two-step approach in which samples are tested initially with an ELISA, and those with equivocal or positive results are then tested by Western blotting with an RST1 strain. The CDC also establishes, for the American community, that an IgM Western blot is consdered positive if two of the three bands are present: 23, 30 and 41 kDa; however caution must be taken since the combination of 23 and 41-kDa may still be a false positive result. An IgG blot is considered positive if 5 of the 10 bands are present (18, 23, 28, 30, 39, 41, 45, 58, 66 and 93 kDa). There are no criteria for European pupulation.

Serodiagnosis is insensitive in the first several weeks of infection

PCR has been used to amplify the genomic and plasmid DNA from several tissues, including ocular fluids.

After antibiotic treatment, antibody titers slowly decline, but IgG and even IgM responses may persist for many years after treatment. So a positive IgM response cannot be used to interpret a recent infection or a reinfection without a clinical picture.

After the appropriate antibiotic therapy has begun, anterior segment inflammation can be treated with topical corticosteroids and mydriatics.