Geophagia (deliberate consumption of earth, soil, or clay), young age, playing in sand boxes, exposure to and ownership of puppies and kittens (specifically young dogs and cats). In puppies 2 to 6 months old the prevalence of Toxocara canis has been reported to be over 80%. In dogs older than one year this number drops to 20%. Water or food such as produce contaminated with the toxocara eggs is another possible exposure.

The definitive host are cats and dogs. Ingestion with toxocara eggs leads to systemic and ocular infection. After ingestion the eggs matures into larvae and reaches systemic circulation via the gut. The larve can infect many organs including the heart, liver, brain, muscle, lungs, and the eyes. When it infects different tissues it is called VLM. Reactive inflammatory processes lead to the organism's encapsulation and the formation of eosinophilic granulomas. Ocular larva migrans is a result of the ingested egg developing and migrating to the eye causing local disease.

The majority of patients will either own or have exposure to a dog or cat. Patients without this history likely were unknowingly in contact with contaminated surfaces or are reported as geophagic by their parents. The vast majority of patients report unilateral reduced vision as well as other symptoms typical of uveitis, such as photophobia. In approximately 10% of cases it is bilateral. 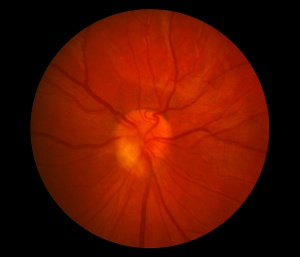 OLM is unilateral in 90% of cases. Ocular toxocariasis typically presents as posterior uveitis in 3 different subtypes

Clinical diagnosis is based on history and examination as described in this article.

ELISA for Toxocara excretory secretory (TES) antigen has a 90% sensitivity and specificity of VLM. OLM is not as easily detectable in peripheral blood tests and so this test is supportive but not the gold standard of diagnosis in ocular presentations. Specificity is lowered due to cross reaction with other helminthic infections. In addition, the value of this test is compromised secondary to the high prevalence of seropositivity to Toxocara without symptomatic infection in the general population. In one study, ELISA was found positive in 50% of patients while negative in 36.4% of patients and unknown in 13.6% of patients (N=22). In particular, one patient in this study with a negative serum ELISA was later found to have a positive aqueous ELISA. In select cases the Elisa may be negative. Performing this test on aqueous or vitreous samples can prove to be diagnostic.

Topical steroids are typically used to limit inflammation in order to prevent the development of tractional membranes and resulting retinal detachments. Other options include periocular injections and oral corticosteroids at 0.5-1 mg/kg. In the case of anterior segment inflammation, cycloplegics are also used to prevent the formation of synechiae.

During surgery, it is important to just circumcise the membranes instead of delaminating or peeling them as they tend to me quite adherent. Even though excision of the granuloma has been reported, it is not widely recommended due to the possibility of disastrous complications. With modern vitreoretinal techniques the anatomical success is 83-100%. Preoperative visual acuity and presence of retinal fold across the macula can affect post operative visual outcome.

Other interventions include laser photocoagulation and cryotherapy to treat the larve and granuloma respectively.

Those that require surgical intervention typically have a poorer prognosis and visual acuity. In very rare cases ocular toxocara has been associated with no light perception vision. Potential complications that develop include cystoid macular edema and retinal detachment.