Saturday Night Retinopathy is an exceedingly rare unilateral acute ischemic retinopathy and choroidopathy due to compression of the globe during a prolonged period of unconsciousness brought on by substance abuse (classically opiates). Findings in the affected eye include severe irreversible vision loss (ophthalmic arterial occlusion), a fixed and dilated pupil, ophthalmoplegia, and often proptosis. Patients can also present with peripheral nerve palsies due to maintenance of a fixed posture while sedated.[1][2]

The term Saturday Night Retinopathy (SNR) was first used in 1973 by Jayam et. al to describe a case of unilateral ischemic retinopathy and choroidopathy secondary to compression of the globe during a prolonged period of unconsciousness brought on by heavy drinking and methadone use.[1] Patients can also present with peripheral nerve palsies due to maintenance of a fixed posture while sedated.[1][2] Since that time, this phenomenon has only been mentioned in a handful of occasions in the literature. Decades before this term was coined, a similar constellation of findings (unilateral blindness, pupil dilatation, lid/orbital edema, proptosis, retinal ischemia) occurred in eight surgical patients at the Mayo Clinic between the years of 1940 and 1952. In each case, the patient was placed face-down on a cushioned headrest while under general anesthesia for two to six hours.[3]

Ischemia of the retina and choroid is thought to be a direct result of collapse of orbital vessels due to sustained external compression; specifically, the ophthalmic artery is affected.[4][5] Since the extraocular muscles are also supplied by ophthalmic artery branches, the lack of blood flow can help explain the transient ophthalmoplegia in these patients.[6] Though not directly tested in humans, Hollenhorst et al was able to replicate identical findings in rhesus monkeys through a combination of sustained pressure on the ocular structures as well as lowered blood pressure. The study additionally found that the shortest effective time of application of pressure to produce retinal ischemia was 60 minutes.[3]After the external compression is alleviated, orbital reperfusion occurs with subsequent vascular dilatation, orbital and retinal edema, and orbital inflammation.[4]

Patients will complain of acute, severe unilateral vision loss and periorbital swelling with mild to moderate ocular pain after a prolonged period of unconsciousness. It is important to elicit a thorough social history with specific attention paid to narcotic and opiate use.

Full ophthalmological examination with DFE (dilated fundus examination) should be performed with an emphasis on visual acuity, IOP (intraocular pressure), pupils, extraocular movements, and Hertel exophthalmometry. The examiner should also note other evidence that may suggest recent intoxication or prolonged obtundation, such as mental status, facial bruising or swelling, peripheral track marks, or peripheral nerve palsies.

Patients present acutely with a unilateral fixed and dilated pupil, ophthalmoplegia of the affected eye, and often ipsilateral proptosis. Conjunctival chemosis and corneal edema can occur as a manifestation of anterior segment reperfusion injury.[5][6] DFE will reveal a pale, non-perfused whitened retina without emboli. Mild hyperemia of the optic disc has been seen.[5] It has been suggested that patients who have shorter periods of compression, or who move and partially alleviate their orbital compression, may still manifest evidence of severe retinal ischemic injury while lacking the proptosis and ophthalmoplegia that suggest a more profound orbital reperfusion injury.[5]

Due to its exceedingly rare incidence, Saturday Night Retinopathy should be considered a diagnosis of exclusion. It should be on the differential in cases of unexplained severe unilateral vision loss, ophthalmoplegia, and/or proptosis with a history of recent narcotic use and a prolonged period of unconsciousness.

CT of the head and orbits is classically notable for preseptal soft tissue swelling.

MRI with gadolinium may reveal engorgement of extraocular muscles and/or the lacrimal gland.[5] It may also demonstrate areas of intracerebral ischemia.[6][7] Examination of the macula will reveal retinal thickening with subretinal edema.[6] 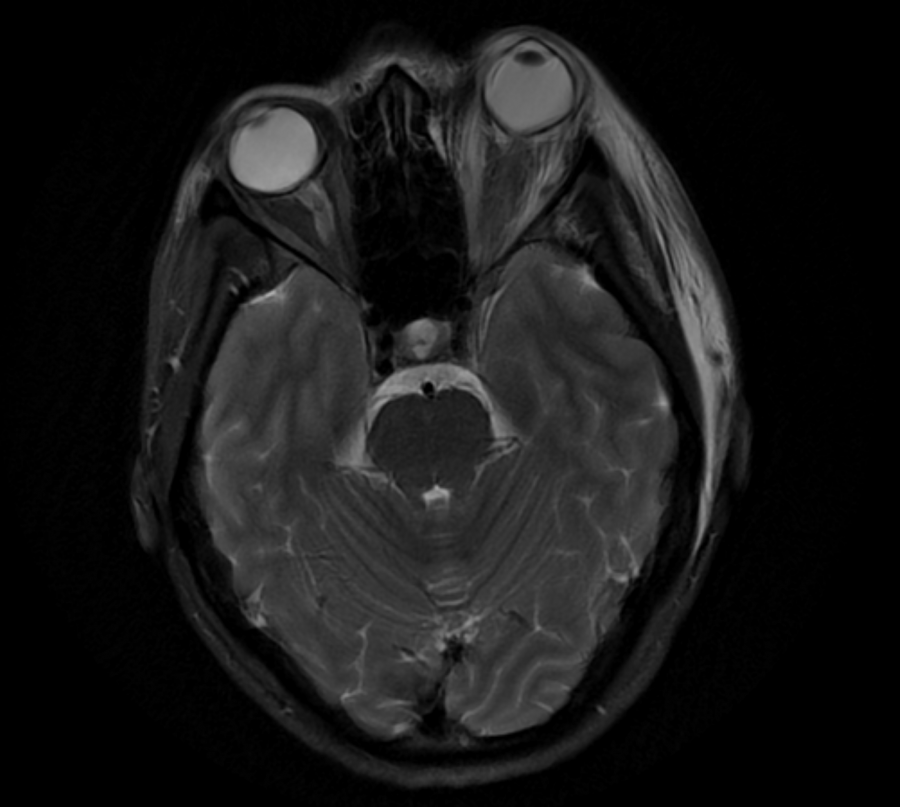 Axial T2 MRI without contrast of the same patient with left-sided Saturday Night Retinopathy. Note once again the proptosis as well as engorgement of the extraocular muscles

Axial DWI MRI without contrast of the same patient with left-sided Saturday Night Retinopathy. There is once again proptosis, marked swelling of the extraocular muscles, and preseptal soft tissue edema.

Fluorescein angiography can demonstrate delayed and decreased perfusion of the choroid and retinal circulation.[5]

ERG may be helpful for isolating the site of the vascular compression. A total absence of ERG signal indicates vascular compromise involving both the central retinal artery and short posterior ciliary arteries. In contrast, central retinal artery occlusion will display some level of preserved outer retinal function on ERG due to preservation of choroidal blood flow.[1]

No specific treatment for Saturday Night Retinopathy has been shown to be consistently helpful. At presentation, the ischemic insult related to sustained external compression has already occurred. However, elevated orbital pressure secondary to reperfusion-induced swelling may be vision-threatening and may reduce the chances of visual recovery. An AC paracentesis or a lateral canthotomy can be considered in the event of a high IOP that does not respond to medical treatment.[5] Proptosis, engorgement of extraocular muscles, and ophthalmoplegia have been seen to resolve without intervention. Patients should be evaluated for other sequelae of narcotics abuse and should be referred appropriately.

There is no known treatment that markedly affects long-term visual prognosis in cases of Saturday Night Retinopathy. Vision loss is always severe and permanent with a visual acuity of light perception (LP) at best.[5]