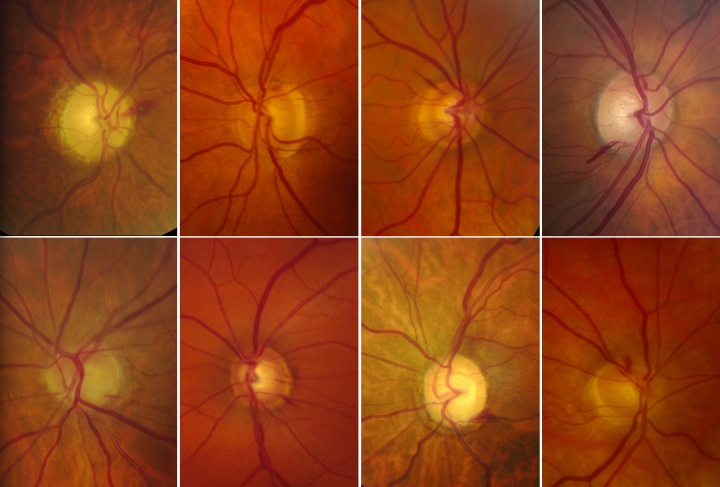 Disc hemorrhages are splinter or flame-shaped hemorrhages oriented perpendicular to the optic disc margin (Figure 1).[1][2][3][4] Classically, these hemorrhages are located in the prelaminar optic disc, cross the peripapillary zone, and extend into the adjacent superficial retinal nerve fiber layer,[1][3][4] although they may not occupy the entire length from disc to retina.[4] Alternately, deeper disc hemorrhages may appear round and blotchy.[3] Less commonly, a disc hemorrhage may be noted in the peripapillary retinal nerve fiber layer reaching within one disc diameter of the optic disc margin.[2]

Although disc hemorrhages have been the subject of tremendous research, the exact mechanism by which they appear remains elusive. Two primary hypotheses exist: mechanical and ischemic vascular.

Proponents of the mechanical theory hypothesize that disc hemorrhages result from mechanical shearing at the lamina cribrosa[5] or because of damage to the capillary network at the border of retinal nerve fiber layer defect enlargement.[6] Essentially, this theory suggests that the primary insult is neurodegenerative, causing changes or stretching of connective tissue, remodeling of lamina cribosa, and/or traction from glial scar formation, which in turn damages the microvascular network leading to hemorrhage. The hemorrhage is a secondary event resulting from tissue damage.[7][8]

Other authors suggest various vascular etiologies,[9][10][11][12][13] for example, ischemic microinfarction in the optic nerve head[9] or perturbation of the blood-retinal barrier.[12][13] In this theory, a yet unknown primary vascular problem increases tissue susceptibility to damage. Recent use of OCT angiography has shown that 46.3% of eyes with disc hemorrhages show peripapillary choroidal microvascular dropout at the site of hemorrhage, as compared to 29.4% of eyes without hemorrhage.[14]

The Relationship to Rim Notches

Most other reports of disc hemorrhage prevalence are subject to selection bias because they have reported on subjects with ocular hypertension, suspected glaucoma, or diagnosed glaucoma often selected from clinical or hospital populations. In studies of subjects with open angle glaucoma,[17][22][26][27][28] for example, disc hemorrhage prevalence ranges from 4.7%[26] to 58.3%.[22]

Overall, disc hemorrhages have been observed more frequently in early compared with advanced glaucoma[29][30] and in patients with normal-tension rather than high-pressure glaucoma.[15][27][31]

Multiple studies have identified both local and systemic associations with disc hemorrhages.

Clinical examination of the optic disc and peripapillary retina is performed with a high magnification convex lens and slit lamp biomicroscope. The findings should be described and the location of a disc hemorrhage should be drawn and photographed.[2] Interestingly, in the Ocular Hypertensive Treatment Study (OHTS), significantly more disc hemorrhages (84%) were detected on annual photographic review at a dedicated reading center than were detected on clinical exam and photographic review at the clinical encounter (16%),[4] a finding that emphasizes the challenge of identifying disc hemorrhages on exam alone.

At present, optic disc imaging techniques are unable to identify disc hemorrhages, emphasizing the importance of imaging as an adjunct to, rather than a replacement for, clinical examination. 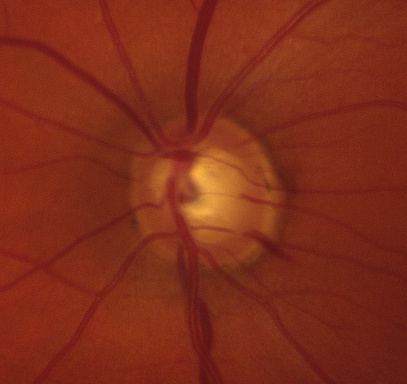 Weekly photography has demonstrated that optic disc hemorrhages persist for 2 to 35 weeks and on average are present for about 11 weeks.[27] A recurrent disc hemorrhage was observed in 64% of eyes, 92% of which occurred within 28 weeks of the prior hemorrhage.[27]

As noted above, documentation of a disc hemorrhage is accomplished both by drawing the location of the hemorrhage with respect to the optic nerve and taking disc photographs. Because current optic disc imaging techniques do not capture disc hemorrhages, clinical examination remains an essential component of diagnosis.

Although disc hemorrhages are strongly associated with glaucoma, there are other causes. Textbooks,[2][52] reviews,[1] articles,[4] and letters[24] cite diabetes mellitus, optic disc drusen, ischemic optic neuropathies, vascular diseases of the retina, systemic hypertension, leukemia, and systemic lupus erythematosus among the possible causes of linear hemorrhages at the optic disc, although little primary literature addresses these associations. Posterior vitreous detachment can also cause optic disc hemorrhage.[53][54] A thorough history and close evaluation for evidence of nonglaucomatous optic neuropathies, disc edema, retinal abnormalities, or retinal vasculature changes may help to distinguish these entities as a potential cause of disc hemorrhage.

Whether disc hemorrhages can occur in normal eyes is discussed below.

The observation of a disc hemorrhage should prompt a thorough investigation for glaucoma, and individuals with disc hemorrhages should be considered glaucoma suspects.[3] Early identification of glaucoma and subsequent significant IOP reduction is the only treatment at present to prevent vision loss, perimetric progression, and changes to the disc and retinal nerve fiber layer.

In individuals with known glaucoma, a disc hemorrhage may be a sign of active disease and progression. Thus, while a disc hemorrhage does not need to be treated, per se, its presence may signal the need to initiate or intensify IOP-lowering therapy. The effect of IOP lowering treatment is discussed below.

Numerous studies show disc hemorrhages to be an important risk factor in the development and progression of glaucoma.

Do all individuals with disc hemorrhage develop glaucoma?

In contrast, two studies found no disc hemorrhages in healthy eyes; they were observed only in suspect[26] and glaucomatous eyes.[26][29] Kitazawa and colleagues found that only 0.4% of normal patients observed consecutively at the University of Tokyo had a disc hemorrhage; a much higher prevalence of hemorrhage was observed in patients with low tension glaucoma and POAG (20.5% and 4.2%, respectively).[27]

Some of the variability between these studies is likely due to their definitions of glaucoma and length of follow up. Although diagnostic criteria for glaucoma may not be met at the time of disc hemorrhage observation, many eyes may eventually progress to glaucoma. As emphasized elsewhere, the presence of a disc hemorrhage should prompt a thorough investigation for glaucoma.

Exfoliation glaucoma (XFG), the most common type of secondary open angle glaucoma,[56] tends to progress more quickly and become more severe compared to POAG.[56][57][58][59] Disc hemorrhage has been shown to be an independent risk factor for progression of XFG.[60]

Observations like these have led some authors to propose two populations of glaucoma patients: bleeders and nonbleeders.[27][50][61][62][63] Some eyes are suggested to be particularly predisposed to disc hemorrhage even with adequate IOP-lowering therapy, and this may be especially true of eyes with NTG.[61] The significance of the two population hypothesis with respect to progression and treatment has not been fully established.

Whether IOP reduction lowers the frequency of disc hemorrhages has not been fully established.[4][41][61][62] Some studies suggest a decrease in disc hemorrhage frequency with significant IOP reduction,[61][62] which may be more readily achieved in primary open angle glaucoma (POAG) and glaucoma suspects compared with normal tension glaucoma (NTG) eyes.[62] The long-term analysis of the OHTS data shows a strong relationship between randomization to treatment group and disc hemorrhage. Participants in the treatment group had a 30% lower hazard ratio for a disc hemorrhage, a trend that was seen in earlier OHTS studies but was not significant until 13-year follow up. [4][25]

Additional research is needed to determine exactly why disc hemorrhages occur and to clarify why only some glaucoma patients develop disc hemorrhages so we may better understand the associated implications for prognosis and management.