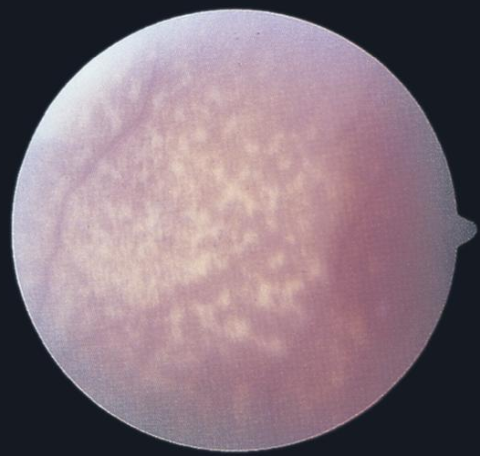 Leber congenital amaurosis (LCA) is a family of congenital retinal dystrophies that results in severe vision loss at an early age. Patients present usually with nystagmus, sluggish or near-absent pupillary responses, severely decreased visual acuity, photophobia, and high hyperopia. It is the most severe retinal dystrophy causing blindness by the age of 1 year in most cases.

The disease was first described by Theodor Karl Gustav von Leber (February 29, 1840 - April 17, 1917) in 1869.[2] It should not be confused with Leber Hereditary Optic Neuropathy described by the same physician in 1871. Leber also described 'Leber miliary aneurysms' now thought to be a variant of Coats disease.[3]

Genetic testing before pregnancy or prenatal testing can identify patients at risk of passing this condition on to offspring.

German Ophthalmologist Theodor Leber first described the dystrophy in 1869 in a blind child with wandering nystagmus, amaurotic pupils, and congenital retinitis pigmentosa. In 1957, a non-recordable ERG (electroretinogram) was identified as a common feature essential to diagnosis of LCA. It was at this time that the disease was named. At the same time, a Swedish study identified the disease to be of autosomal recessive inheritance. This dystrophy is a genetically heterogeneous recessive disease affecting 1 in 30000 to 1 in 81000 subjects.[6]

Risk factors are affected parent and/or parents who are carriers of a mutated gene responsible for one of the 17 LCA subtypes.

The histopathology showed the involvement of outer retina and photoreceptors and suggested that the LCA is a degenerative process rather than agenesis.[7]

The pathophysiology of LCA is related to the inability of the eye to undergo phototransduction due to a disruption of the Visual Cycle. The Visual Cycle is a series of enzymatic reactions between the retinal pigment epithelium (RPE) and the neurosensory retina to metabolize dietary vitamin A into 11-cis retinal to generate photopigment. Without 11-cis retinal, the phototransduction cascade cannot be initialized; thus, visual neuronal signals are not propagated to the visual cortex. A dysfunctional mutation of any of the genes encoding for proteins that catalyze any of the series of enzymatic reactions to generate 11-cis retinal can block the Visual Cycle and lead to symptoms of LCA.

The link between the hindrance of innate vitamin A metabolism within the eye and photoreceptor degeneration remains unclear and is currently an active area of biomedical research.

The estimated birth prevalence of LCA is two to three per 100,000 births.[8][9] LCA represents almost 5% of all retinal dystrophies and 20% of children with visual impairment in special schools.[10]

LCA is characterized by significant vision loss in infancy. It may be suspected in a young child with decreased visual response, nystagmus, poorly reactive pupils, and an extinguished ERG. Family history is typically consistent with autosomal recessive inheritance.

No retinal lesion is diagnostic of LCA or specific for a certain subtype. Infants usually have normal fundus appearance and fundus abnormalities usually present later in life.

Profound visual impairment is usually present from birth. One-third of individuals with LCA have no perception of light. Visual acuity is, with rare exceptions, 20/400 and below. The visual impairment is generally stable or very slowly progressive. Occasionally in the early stages, a mild degree of visual improvement is observed, followed by progressive degradation. Clinical diagnosis is based on clinical findings and ERG. LCA has retinal, ocular, and extraocular features and occasionally, systemic associations.[11]

Nonrecordable/Extinguished or severely reduced scotopic and photopic electroretinogram (ERG) is typical in LCA. Normal ERG responses rule out a diagnosis of LCA. Visual evoked responses are variable. ERG measures electrical response of retina which are decreased or absent in LCA. Autofluorescence measures lipofuscin accumulation in RPE which is related to shed photoreceptor disc elements. Amount of autofluorescence in LCA varies by subtype. For example, autofluorescence is normal in GUCY2D mutation but absent in RPE65 mutations. OCT is high resolution cross sectional images of retinal architecture. In LCA, retinal atrophy is common. In advanced LCA, retinal arterioles are attenuated reflecting overall metabolic status of retina.

Keratoconus is often associated with LCA and it has been postulated that the mechanism is possibly secondary to the oculodigital phenomenon. However, it is likely that development of keratoconus is due to a combination of genetic environmental and toxic (retinal death) factors.

Cataracts are also a known association of LCA. Etiology is similarly unclear but also likely due to a combination of genetic, environmental and toxic factors.

To date no substantial treatment or cure for LCA exists. Affected individuals benefit from correction of refractive error, use of low-vision aids when possible, and optimal access to educational and work-related opportunities.

In 2017, the US Food and Drug Administration (FDA) approved voretigene neparvovec-rzyl (Luxturna Spark Therapeutics, Inc., Philadelphia, PA), for the treatment of biallelic RPE65 mutation-associated- LCA2. This was the first United States Food and Drug Administration (FDA)–approved gene therapy product for the eye. RPE65 mutation accounts for only a minority of patients with LCA. For the other mutations there is no effective therapy proven so far. However, reduction in light exposure is recommended to avoid photophobia.

The general theory behind gene therapy is that in a person with a known mutations of a coding region of a single gene, introduction of a normal allele can return cells to normal functioning. Gene therapy was first attempted in the Briard dog who was discovered to have similar clinical characteristics to humans of disease resulting from RPE65 gene mutation. In fact, there are a number of gene mutations in the RPE65 gene that are associated with inherited retinal dystrophies in both humans and dogs. The Briard dog was famously the first successful retinal gene therapy performed in animal models. Multiple studies have reported the restoration of vision in Briard dogs with RPE65 mutation using recombinant adeno-associated virus vectors as effective gene delivery vehicles for treatment of retinal diseases.[12] These breakthroughs served as the basis for clinical trials of gene therapy in humans.

The FDA approval of sequential and bilateral injection of voretigene neparvovec-rzyl to treat visually impaired patients who carry an RPE65 mutation was based on 1-year data from the only randomized controlled phase III clinical study to date, which demonstrated significant vision improvement as a result of the treatment. [13] Patients with LCA2, a mutation of RPE65 gene were treated with injection of adenovirus vector carrying a normal copy of the RPE65 gene. Multiyear follow-up evaluation of the patients from two other trials (ClinicalTrials.gov NCT00481546 and NCT00643747), however, revealed progressive decline of clinical benefits including retinal sensitivity, visual acuity, and functional gain following an initial peak seen at 6– 12 months after the treatment.[14]

Many additional gene therapy programs targeting both inherited retinal diseases and other ocular diseases are underway with animal models including treatment for GUCY2D, AIPL1 and CEP290 mutations found in other LCA subtypes. These studies are also using viral vectors to deliver normal genes and are showing promise in the rescue of rod-cone photoreceptors.

Close follow-up of infants with LCA is recommended with diagnostic ERG. Fundus photos and detailed retinal examination may be helpful. Low vision referral may be warranted. Genetic counseling is recommended for families and patients. At conception, each sibling of an individual with recessively inherited LCA has a 25% chance of being affected, a 50% chance of being an asymptomatic carrier, and a 25% chance of being unaffected and not a carrier. Carrier testing for at-risk family members and prenatal testing for pregnancies at increased risk may be possible if the disease-causing mutation in the family are known. Pre-implantation genetics may be considered in this patient population.

Gene therapy is a technique where the genes are delivered through vector virus injected subretinally.

The disease has three subtypes: stable, progressive decline and appreciable improvement. Three separate studies with a total of 90 patients with LCA documented the prevalence of patients in each category. In summary, 15%, 75%, and 10% of cases have showed deterioration, stability and improvement, respectively. The category to which patients belonged was dependent on the subtype of LCA patient had.[15][16][17]