Leber Hereditary Optic Neuropathy (LHON) is the most common inherited mitochondrial disorder and typically affects young males. It typically begins as a unilateral progressive optic neuropathy with sequential involvement of the fellow eye months to years later. Treatment options are limited, but include the use of antioxidant supplements. Gene therapy trials are currently underway.

Individuals eventually diagnosed with LHON may initially be asymptomatic, or experience mild blurring of the central visual field of one eye. Males are more likely to be affected than females, with some reported ratios as high as 9:1. Age of onset is typically between 10-30 years, though onset in the seventh or eighth decade has been reported. Symptoms may progress from mild unilateral visual loss to severe bilateral visual loss, usually worse than 20/200. Visual field testing typically shows a worsening central or cecocentral scotoma. Examination may initially reveal normal or pseudo-edematous optic nerves, with optic nerve pallor and atrophy appearing subsequently. Individuals may harbor concurrent disease including cardiac conduction abnormalities, dystonia, and multiple sclerosis-like illness. This is considered "LHON Plus" disease.  Few individuals recover vision once lost, but visual loss rarely progresses to no light perception.

LHON is classically associated with mitochondrial base pair mutations G11778A (guanine to adenine at position 11778), T14484C (tyrosine to cytosine), and G3460A. These mutations primarily affect respiratory chain complex I genes, mitochondrial genes ND1, ND4 and ND6 among others.

The G11778A is the most common, reported to account for 70% of cases in Northern European populations, and 90% in Asian populations. It is associated with more severe disease, with less chance of significant visual recovery.

The T14484C mutation is associated with the best overall prognosis, with some visual recovery in 37-58% of cases. This typically occurs after reaching a visual 'nadir'. French Canadians with LHON commonly exhibit this mutation variant. [1] [2]

The G3460A mutation usually portends a more intermediate course and has the worst prognosis. [1][2]

Many mitochondrial diseases display heteroplasmy. Each cell contains numerous mitochondria, and in 10-15% of patients with LHON mutations, only a certain percentage of these mitochondria may have mutant DNA. Those with a "mutation load" less than threshold (60-75% in some reports) may not exhibit a disease phenotype and may never lose vision. It has been posited that due to the heteroplasmy seen in this disorder, the right and left eye may have different amounts of affected mitochondrial DNA (mtDNA)[3].

It is unknown why males are preferentially affected. Theories include the presence of a 'susceptibility locus' on the Y chromosome.

Mitochondrial mutations cause defects in several NADH-ubiquinone oxidoreductase chains. This is thought to impair glutamate transport and increase reactive oxygen species production. This leads to retinal ganglion cell through apoptosis, though it is unclear why these cells are particularly vulnerable. Atrophy and demyelination is subsequently noted in the optic nerves, chiasm and tracts.

In acute LHON, macular changes precede peripapillary retinal nerve fiber layer swelling. The thickening of these layers acutely is then followed by thinning chronically. It has been suggested that this is process is due to a state of pseudo-hypoxia, followed by a compensatory response. OCT-A performed LHON patients demonstrates vascular dilation and tortuosity, which may be seen clinically. [4]

Individuals may report history of progressive visual loss in maternal family members. Males are affected in 80% of cases. Otherwise, neither age nor lifestyle choices have been shown to increase disease incidence. Late-onset-LHON patients had significantly higher cumulative tobacco and alcohol consumption as compared with unaffected carriers[5], suggesting that these factors may in fact worsen disease severity once an individual has the disease.

LHON must be distinguished from other causes of optic neuropathy, as diagnosis and treatment course may vary significantly.

Individuals typically present with unilateral, slowly-progressive, painless visual blurring in the second to fourth decade of life, though peak age of onset for all cases is second and third decades of life[6]. Average age of onset for 11778A was 22-24 years old, while 14484C had a mean onset of 20 years old.[7][8][9] Males are affected more commonly than females. The patients signs and symptoms are often confused with optic neuritis, except for the lack of pain. Some patients may discover visual loss by incidentally covering the other eye, or by noting increasing difficulty with day to day tasks. Some may present after involvement of the second eye has commenced, and may thus complain of bilateral visual loss. Others may note color or light desaturation. Second eye involvement is usually weeks to months yet the visual loss may simultaneous. The longest interval reported between eyes is 18 years. History of concurrent, "LHON Plus" related neurologic or cardiac dysfunction should be elicited, including dystonia, tremor, neuropathy, movement disorders, weakness, nonspecific myopathy, and arrhythmias. Leigh syndrome may also be associated with LHON.[9] 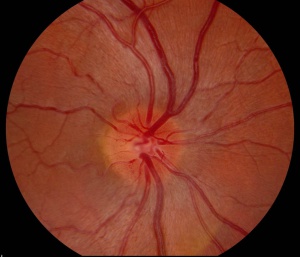 Visual acuity may be mildly reduced in early stages, but can progress to counting fingers in one or both eyes. An afferent pupillary defect may be noted when disease activity is asymmetric, often in the interval between presentation of unilateral visual loss and progression to the fellow eye. Color testing reveals decreased red-green discrimination. Extraocular motility is typically intact, and confrontation visual fields may reveal intact peripheral vision. However, central or cecocentral scotomata may be described and more plainly delineated with formal visual field testing (Humphrey, Goldmann). In patients presenting with unilateral symptoms, formal visual field testing may display subclinical visual deficits in the fellow, seemingly unaffected eye. Reduced contrast sensitivity and subnormal electroretinogram are also present.

Slit lamp examination of the anterior segment is usually normal. Dilated fundus examination may be normal, or reveal hyperemic, "pseudo-edematous" optic nerves with peripapillary telangiectasias. Tortuosity of retinal arterioles may also be present. (See image.) Though the optic nerve heads appear elevated and edematous they do not display leakage on fluorescein angiogram, as opposed to those affected by inflammatory disease.

Clinical suspicion for LHON may be heightened in the setting of a known family history of mitochondrial disease. The appearance of characteristic optic nerve changes as described above may lead to a tentative diagnosis, but this is often confirmed with genetic testing. Late phase LHON may display optic atrophy or nerve head pallor which may be indistinguishable from other causes of optic neuropathy.

Fluorescein angiogram may be performed to rule out true optic nerve edema. No dye leakage is noted along the borders of an otherwise swollen-appearing optic nerve head. Optical coherence tomography (OCT) of the optic nerve may show elevation in initial phases of the disease, or atrophy in later stages.

Based on the history and physical examination, other causes of optic neuropathy should be excluded, especially in those with no family history of LHON. This may include laboratory testing of serum vitamin B12, folate, RPR, FTA-ABS, ANA, Lyme titers, ACE or PPD testing in the correct clinical scenario.

MRI imaging is especially recommended to rule out demyelinating disease and compressive lesions. There are some reports to indicate that patients with LHON may show increased T2 signal in the optic nerves, chiasm, and tracts. The orbital fat-suppressed contrast enhanced MRI may show optic nerve enhancement similar to optic neuritis, chiasmal enlargement and enhancement may also occur. Thus, optic nerve enhancement and enlargement of the optic chiasm may be detected on MRI in LHON. In appropriate clinical scenarios, this MRI finding should not dissuade physicians from including LHON in the differential diagnosis of an acute optic neuropathy.

If other causes of optic neuropathy are comfortably excluded, gene testing is performed via targeted mutation analysis. Ninety percent of LHON patients harbor one of the three most common mutations as listed above. Identification of the mutations may help predict prognosis.

Management of this condition is primarily supportive, with early introduction to visual aids and occupational therapy.

There is no established medical treatment for LHON, though there is a theoretical benefit from using antioxidants to help reduce the neurotoxic stress due to reactive oxygen species. Multiple supplements such as vitamins B12 and C, Coenzyme-Q10, brimonidine, and lutein have shown minimal benefit but may be recommended. Patients are cautioned to avoid neurotoxins such as tobacco and alcohol, as these may increase oxidative stress.

Idebenone, a short chain synthetic benzoquinone, has undergone testing as an agent in the treatment of several neurologic diseases. A double-blind, randomized placebo-controlled trial of idebenone in the treatment of LHON (RHODOS - Rescue of Hereditary Optic Disease Outpatient Study) was recently completed. Eighty-five patients with one of the three primary LHON mutations and onset of symptoms within the last five years were randomized to receive 300mg of idebenone three times a day for 24 weeks, or placebo. Though the study did not reach its primary endpoint, best recovery in visual acuity, post hoc analysis revealed improvement in visual acuity seen particularly in those individuals with discordant vision between eyes. Those with the G11778A and G3460A seemed to benefit more; this was attributed to the high spontaneous rate of those with T14484C negating treatment effect. Most patients tolerated the medication well. The results have been deemed promising but limited at this time.

EPI-743 may have more potency than idebenone, but no clinical trials have been performed. Gene therapy techniques have advanced , including allotopic expression and nuclear transfer. Also, rescue of animal models of LHON with both of these therapies has been demonstrated.

The introduction of exogenous DNA into the mitochondrial genome with mitochondrial targeting of viral vectors is another promising technique. Recently, researchers conducted a Phase I trial using intravitreal injection to deliver genetically-modified adeno-associated viral vectors (AAV2) with the ND4 gene to affected eyes in individuals with the 11778A mutation. In the 15 patients, this therapy appeared to be safe and well-tolerated with mostly mild intraocular inflammation. Another study of five participants with the 11778A mutation demonstrated similar results with respect to safety as well as some improvement in certain patients. However, it should be noted that these are the preliminary results of an ongoing study.[4][10] [11]

Patients may be followed with serial visual acuity, visual field, contrast sensitivity and color testing. Low vision aids should be provided early. Genetic counseling is recommended for affected individuals and maternal family members. Male patients may be reassured that they cannot transmit the disease to offspring. The mother of an affected individual likely harbors the mitochondrial DNA mutation but may or may not have developed symptoms. Female patients will transmit the mutation to all offspring. Those who exhibit heteroplasmy, however, may transmit a low mutation load. Therefore. offspring may have low risk of disease. De novo mutations are rare, but may be present in individuals whose maternal relatives do not have a history of visual loss.

Prognosis, as stated above, may be related to which LHON mutation a patient harbors. Though those with T14484C may have a higher chance of spontaneous visual recovery, all individuals with LHON are subject to permanent visual loss. Vision may decrease to worse than 20/200 in both eyes. It is rare to lose light perception. In addition, those with LHON Plus disease may experience morbidity and mortality related to their respective cardiac and neurologic disease.