Strabismus fixus convergence or ‘Heavy Eye’ syndrome (HES) is a cause of acquired esotropia in the setting of high myopia. Patients classically present with diplopia secondary to progressive esotropia and hypotropia with limitation of abduction and elevation, although exotropia and hypertropia have also been described [1][2]. Heavy eye syndrome should be differentiated from sagging eye syndrome (SES) which is mostly seen in non-myopic elderly population and presents with esotropia worse at distance along with degenerative changes such as, bilateral blepharoptosis, and deepening of the lid sulci [2].

It is hypothesized that HES is the result of LR and SR shifts caused by the elongated posterior portion of the eyeball due to high myopia. Inferior shift of LR causes reduced abduction and increased infraduction. Nasal shift of SR causes reduced supraduction and increased adduction. Consequently, HES shows esodeviation and hypodeviation due to increased adduction, reduced abduction, reduced supraduction with an increased infraduction [3]. 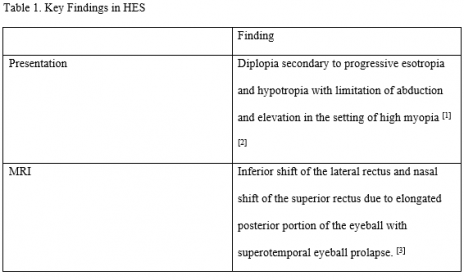 There are no definitive diagnostic criteria for HES [3]; however, findings are described below. Table 1 compiles key findings in HES.

Heavy eye syndrome is not typically seen in childhood. Patients typically have high myopia - Hayashi et al. found an average diopter of -18.00D among their cases. Some patients will complain of new onset diplopia in adulthood [4]. Some patients may present with concerns about appearance of the eye [5]. The older and more myopic the patient, the more likely the patient will have an acquired esotropia and/or a vertical heterotropia [6].

Figure 1 represents the difference between the angle of dislocation of the globe in patients with HES (left) versus the control group(right) as described by Yamaguchi et al. Each diagram displays the angle created by the center of the globe (G), the lateral rectus muscle (L), and the superior rectus muscle (S). The other letters in the figure indicate the medial rectus (M) and the inferior rectus (I). These diagrams represent the right orbit as it would be seen in a coronal MRI.

Neuroimaging, preferably with MRI, should be obtained with attention to the paths of the rectus muscles [1] [7]. If altered paths of the muscles are noted, the surgical options will aim to correct the deviation. If no abnormality is found and in the absence of other causes, classical recession-resection surgery may be beneficial [1].

Mansour et al. reported two cases of acquired convergent strabismus fixus that developed ocular ischemia, atrophy of the optic nerve, and central retinal artery occlusion. They believed these complications to be secondary to mechanical stretching and torsion of the optic nerve with subsequent strangulation of its blood supply. They recommended early surgical correction of strabismus fixus [9]. 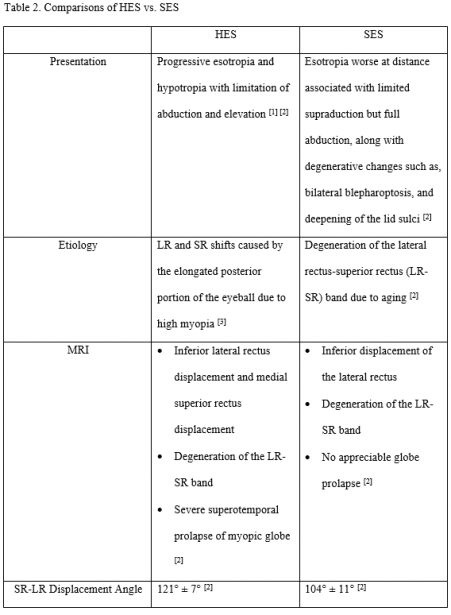 In patients with highly myopic strabismus, it is important to distinguish HES from SES as the distinction drives appropriate surgery. There is overlap of motility findings; therefore, imaging should be obtained. Orbital MRI demonstrates inferior lateral rectus displacement and medial superior rectus displacement with severe superotemporal prolapse of the myopic globe in HES, whereas only inferior displacement of the lateral rectus results from degeneration of the LR-SR band is seen in SES [2]. Distinctions and similarities have been compiled into Table 2.

Hayashi et al. found the recession and resection (R&R) procedure to be easy and effective when the abducting disorder is not severe. However, R&R was less successful in patients with more severe disease, which they defined as cases where the patient could not abduct to the midline or had a fixed eyeball in the extreme adducting position [4].

The most successful outcomes have come from correcting the muscle paths of both the superior and lateral rectus muscles. The most commonly performed surgery involves loop myopexy of the superior and lateral rectus muscles either with or without muscles splitting [1]. Yamaguchi et al. demonstrated the efficacy of loop myopexy±medial rectus recession in 23 patients. They were successful in decreasing the angle of dislocation of the globe, increasing the angles of maximum abduction and sursumduction, and decreasing the angle of ocular deviation. All 23 patients had positive forced duction tests preoperatively; and postoperatively, only 1 patient had a positive forced duction test. Dislocation of the globe, restriction of ocular movements, and ocular deviation did not relapse during follow up (mean 48.8 months) [8]. Akbari et al. modified this procedure by using two sutures for muscle belly union which resulted in favorable outcomes in 16 patients [12]