Coats disease is a telangiectatic neovascular disease of the retina of unknown etiology that frequently affects unilateral eyes of young males.

George Coats[1] in 1908 described the histopathological features of enucleated eyes with massive exudation. He divided the morphology into 3 groups:

A large study of 117 patients[3] took the definition of Coats disease as 'idiopathic retinal telangiectasia and intraretinal or subretinal exudation without appreciable signs of vitreoretinal traction.'

Coats disease is usually characterized by unilateral (95%), progressive development of abnormal vessels in the retina of the affected individuals. It’s more frequent in males (at least 3:1) than females, and in patients younger than 8 years old, even though it has been observed in infants as well as older patients.

Lebers miliary aneurysm is considered to be a milder variant of the Coats disease, which usually does not have massive subretinal exudation, hemorrhage or exudative retinal detachment. Type 1 idiopathic macular telegiectasia is now considered the same disease as Coats disease.[2]

The disease is primarily due to aneurysms and telangiectatic vessels. The usual location of these vessels is within the temporal retina. These abnormal vessels are leaky and there is exudation in various degrees.

No genetic basis has been found but there has been described chromosomal instability in chromosomes 3 and 13.

Other genes which have been implicated include:

Coats like response has been noted in cases in patients with Turner Syndrome (XO), Senior Loken Syndrome, retinitis pigmentosa (both syndromic and isolated), facioscapulohumeral dystrophy (FSHD), and Linear Scleroderma/ Parry Romberg Syndrome. Especially in females, bilateral involvement and FSHD should be ruled out. 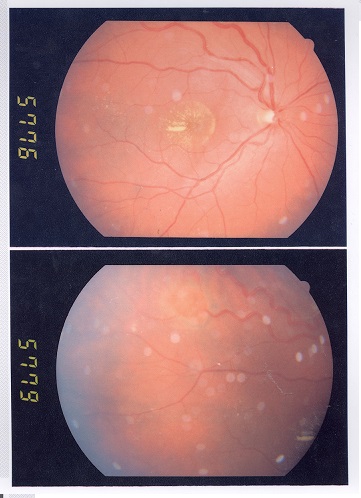 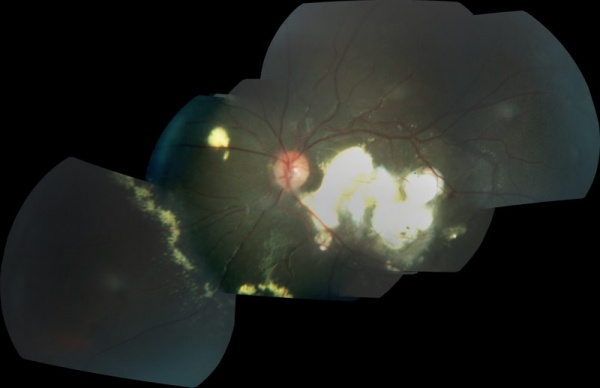 A montage of fundus image in a case of Coat's disease showing central and peripheral exudation.

In mild cases one or two foci of retinal telangiectasia can be found usually on the temporal hemispheres. Microaneurysms, and thickening of retinal vessels are seen. Affected vessels show irregular enlargement with aneurysms which light up like bulb during fluorescein angiogram. The vascular abnormalities are usually prominent near the peripheral capillary dropout. The vascular leakage causes hard exudates which may be peripheral (near the vascular abnormalities) or mid peripheral and central (at macula). In type 1 macular telangiectasia, the telangiectasia and aneurysm with hard exudates (primarily cholesterol) are seen temporal to the fovea. Intraretinal or subretinal fluid/exudate may be noted at the macula.

The exudates vary in size and they have a tendency to occupy the inferior pole, as a result, visual acuity is reduced primarily due to infiltration of the fovea, formation of cystoid macular edema or even exudative retinal detachment. Those exudates ultimately cause discoid glial scarring and subretinal neo-vascularization. Long standing subretinal exudate may cause superficial crystalline deposits. The retinal vessels overlying the subretinal exudates may undego gliotic sheating. Retinal pigment epithelial metaplasia with subretinal fibrosis may be noted. Retinal neovascularization is uncommon, but can occur in late stages.

Anterior segment is usually not involved in early cases, but late cases may cause neovascularization of iris or angle of anterior chamber, ectropion uvae, neovascular glaucoma.

In children, the exudative detachment may be bullous, immobile and touching the posterior capsule of the lens. The irregular caliber of telangiectatic vessels, aneurysms, subretinal exudates and lack of calcification on ultrasound differentiates it from retinoblastoma.

Representative cases are presented at https://webeye.ophth.uiowa.edu/eyeforum/cases/100-Coats-Disease.htm

Besides thorough fundoscopy, which ultimately establishes the diagnosis, several clinical tests may be utilized. The diagnostic tests include OCT, ultrasound and fluorescence angiography.

Two useful staging systems include those developed by Comez-Morales and by Siegelman.

The major clinical significance of Coats Disease is to differentiate it from Retinoblastoma since both appear with leukocoria, but calcium seen in CT or ultrasound excludes Coats in favor of Retinoblastoma. Other conditions such as Toxocara infection, retinopathy of prematurity, pars planitis, familial exudative vitreoretinopathy, retinal metastatic lesions, Norrie disease, Eales disease, cavernous retinal hemangioma and leukemia, should be considered. A retinal vasoproliferative tumor is differentiated by presence of feeder and draining vessel, an obvious vascular mass, preretinal fibrosis and extreme peripheral location.

Observation- In minimal telangiectatic vessels with little or no exudation and no imminent threat to vision, or in painless and comfortable blind eyes

Laser treatment (low power, long duration, large spot burns to the telangiectatic vessels and aneurysms, also laser the peripheral capillary nonperfusion as per scatter laser settings) - in telangiectasia with exudation but no or minimal subretinal fluid

Anti-VEGF therapy- has been promising but the safety profile for children is as yet unclear.

Intravitreal triamcinolone acetonide- may reduce the exudation, but risks of glaucoma and cataract are there.

The prognosis depends on the extent of the disease with milder, older presenting cases, having a better prognosis, of even spontaneous regression, whereas children under the age of three have a poorer prognosis.