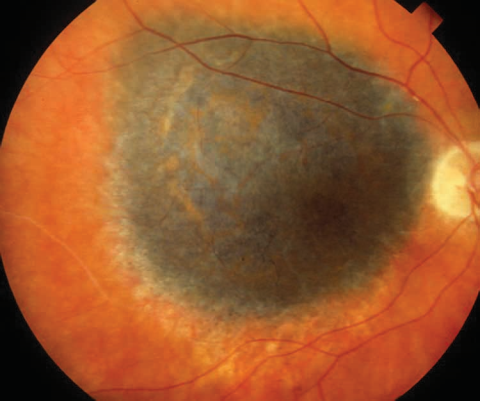 While development of uveal melanoma is largely considered to be a sporadic event, certain risk factors including light iris color, light skin color, a tendency to freckle, northern European ancestry, welding and rarely a family history of uveal melanoma have been reported to predispose individuals to uveal melanoma [4].  Other conditions with an increased incidence of uveal melanoma include dysplastic nevi and Nevus of Ota (estimated that 1:400 will develop uveal melanoma). While ocular nevi are a risk factor, the estimated rate of transformation into melanoma is approximately 1/5000-1/8845 [5].

The pathophysiology of uveal melanoma is currently not well understood. There have been several advances in the molecular mechanisms involved in this malignancy. Monosomy 3 has long been known to be associated with development of aggressive uveal melanoma. More recently, specific abnormalities in loci associated with high-risk melanoma have been identified including 3p and 1p losses and 8q gain. Currently, numerous genetic mutations have been demonstrated to be highly conserved in the clonal proliferation of uveal melanocytes.

At the cellular level, the molecular expression for metastasis is heavily biased towards one of the three cell types that make up uveal melanoma tumors.

Melanomas are often asymptomatic. Symptoms are not a common initial presentation of small melanomas, but can be present in larger lesions and melanomas that affect the macula. The main symptoms are decreased visual acuity, visual field defects (scotomas), metamorphopsia, photopsia and floaters. Less common symptoms are pain and red eye. Ciliary body melanomas present relatively later and are larger. A sentinel vessel (dialted, tortuous episcleral vessel overlying the tumor) is more common in ciliary body tumors. In advanced cases, there may be a secondary glaucoma due to displacement of the lens-iris diaphragm and secondary angle closure. The presence of symptoms is more commonly found in melanomas than in choroidal nevi.

Posterior uveal melanomas typically present as an elevated domed-shaped gray-brown colored lesion of the choroid with irregular margins not sharply demarcated. Less commonly, a melanoma will be amelanotic. When the melanoma breaks through Brüch membrane it acquires a classic mushroom-shaped configuration; this occurs about 20% of the time.

Several clinical characteristics should be looked for during the evaluation of a suspicious lesion:

Certain features are more common in benign choroidal nevi including:

The size of choroidal melanomas is one of the most important clinical characteristics. Size is used to classify these tumors, according to a modification of the criteria of the Collaborative Ocular Melanoma Study (COMS). This study classified melanomas using largest basal dimension and apical height in three groups: small, medium and large melanomas. Treatment strategies vary depending on this classification.

Additional ancillary tests can aid in the clinical evaluation of a melanoma:

Serial fundus photos are critical in the follow up of choroidal nevi and melanoma. The Optos creates an easily replicated map of the fundus, however, conventional photography is superior in the color match.

Orange lipofuscin pigmentation possesses autofluorescent properties. Liposfuscin is present in suspicious nevi and many melanomas. Lipofuscin fluorescence is brighter than that of drusen (drusen are common in choroidal nevi). 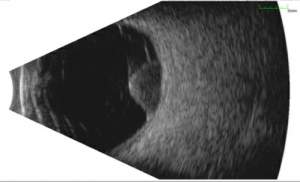 This is the primary diagnostic test that confirms the diagnosis of melanoma. Ultrasound also is useful in determing the size, e.g thickness (apical height) and basal dimension, extraocular extension (such as scleral nodules), and document growth during the follow up of a suspicious nevus/small melanoma.

Choroidal melanomas show pulsatile blood flow at the tumor base. This finding is not found in nevi.

Standard spectral domain OCT does not penetrate deeply enough for detecting the internal characteristics of choroidal neoplasms. However, it is useful in visualizing changes in the neurosensory retina and the retinal pigment epithelium (RPE). As it was mentioned earlier, posterior uveal melanomas may show serous retinal detachment in the areas adjacent to the tumor. Lipofuscin deposition is also seen at the level of the RPE.

Enhanced Depth Imaging Spectral Domain OCT is a relatively new technology that is now commercially available. It is a method that allows for the evaluation of deeper structures such as the choroid and the internal portion of the sclera. In a study of 37 eyes by Carol Shields, et al. it was found that the distinguishing characteristics of choroidal melanomas readily seen in EDI-OCT are:

MRI may be used occasionally to aid in establishing a diagnosis and to look for extrascleral extension. MRI is most useful distinguishing melanoma from blood. Pigmented melanomas and subacute hemorrhage are similar in appearance on T1- and T2-weighted images, i.e. each is hyperintense on T1 and hypointense on T2. However, only melanoma demonstrates marked enhancement with administration of contrast. Of note, amelanotic choroidal melanomas will not resemble blood on exam or by MRI. An amelanotic lesion will not be hyperintense on T1-weighted images but it will still show marked enhancement with contrast.

Posterior uveal melanomas spread via vortex veins to the vascular system. Most metastasis are to the liver (92%), but the tumor can also spread to the lungs and the skin. Uncommonly, melanoma can demonstrate extension into optic nerve and brain. There is a lack of consensus on the optimum screening methodology for uveal melanoma. Among the tests that may be ordered during the metastatic workup for a patient with choroidal melanoma are:

Most uveal melanomas have no genetic predisposition. Only about 1% are thought to be inherited. An alteration in tumor suppressor genes found on chromosome 3 is associated with some hereditary melanomas. There are two germline mutations responsible for hereditable melanoma: loss of BAP 1 expression as in BRAC1-associated protein-1 (BAP1) tumor predisposition syndrome (BAP1-TPDS)[6] and more recently, inactivation of Methyl-CpG Binding Domain 4 (MBD4).[7]

There is evidence that choroidal melanomas arise from choroidal nevi, since nevi cells have been found in histopathological samples of melanomas. Thus, Shields and colleagues analyzed 2,514 cases of choroidal nevi to determine predictive features of growth into melanoma. Using the data obtained in this study, they developed a mnemonic for these predictive features: “To Find Small Ocular Melanoma Using Helpful Hints Daily”. [8]