Exenteration is a surgical procedure involving removal of the entire globe and its surrounding structures including muscles, fat, nerves, and eyelids (extent determined by disease being treated). This differs from enucleation, which is the removal of the globe while leaving all other surrounding structures and evisceration, which is the removal of intraocular contents while leaving an intact sclera.

George Bartisch was the first to describe the process of orbital exenteration. He gave full instructions about the instruments and techniques involved in removing the entire contents of the orbit and tumors out of the socket[1]. The modern form was first described by Arlt[2].

Exenteration is performed mostly for orbital malignancies in an attempt to become cure of cancer with tumor free margins. It is also performed in painful or life-threatening orbital infections or inflammations. Malignancies of the ocular adnexa are the most common causes of orbital exenteration include squamous cell carcinoma, basal cell carcinoma , and sebaceous carcinoma[3]. Other less common tumors include conjunctival malignant melanoma, adenoid cystic carcinoma of the lacrimal gland, and uveal melanoma with extrascleral extension[4].

When considering which technique to use, it is important to realize that often times it is the type of disease that has a much greater impact on the survival of patients undergoing exenteration surgery than the type of exenteration surgery or the disease status of surgical margins[5]. In planning the surgery, the extent of orbital invasion, the biological behavior of the tumor, and the presence of perineural spread must be considered. Aggressive cell types and in particular the possibility of perineural invasion should prompt larger margins of excision[6].

Total exenteration removes all orbital tissue, including the periorbita, posterior to the orbital rim. The eyelids may be preserved in posterior tumors within the orbit and even some arising in periocular skin. Most anterior tumors, however, require removal of all anterior orbital tissue and periorbita together with the eyelids, but the posterior orbital tissues may be preserved. If there are macroscopic changes during the operation that lead to suspicions of bony invasion, it is helpful to have a frozen section examination of the periorbita. If it is positive, bone should be removed and sent for pathological analysis[6].

General anesthesia should be employed if possible. In rare exceptions local retrobulbar, infraorbital, and periorbital nerve blocks may be used if general anesthesia is absolutely contraindicated. A 4-0 black silk suture is passed through the skin, orbicularis muscle, and superficial tarsus of the upper and lower lids and tied together to close the eyelids and to provide traction during the procedure. A skin incision is outlined 2 mm above the upper lash line and 2 mm below the lower lash line and extended to just beyond the medial and lateral canthi (Fig. 8A). The incision is placed only through the eyelid skin and orbicularis oculi muscle, which is then undermined superiorly and inferiorly until the periosteum just outside the orbital rim is exposed for 360° (see Fig. 8B).

A rubber drain is placed in the socket after complete hemostasis, and the skin of the upper and lower eyelids are sutured together with interrupted 5-0 silk sutures (see Fig. 8F). This leaves the residual orbital cavity filled with air (see Fig. 8G). One skin suture is tied to the drain. The drain suture is removed in 12 to 24 hours, and the drain is removed in 24 to 48 hours, depending on when drainage has ceased. The skin sutures are removed in about 1 week, and dressings are not required. The remaining eyelid skin gradually retracts into the socket and provides a more cosmetically acceptable lining of the socket after exenteration (see Fig. 8H). An orbital prosthesis can be fitted within 3 to 4 weeks (see Fig. 8I)[7]. 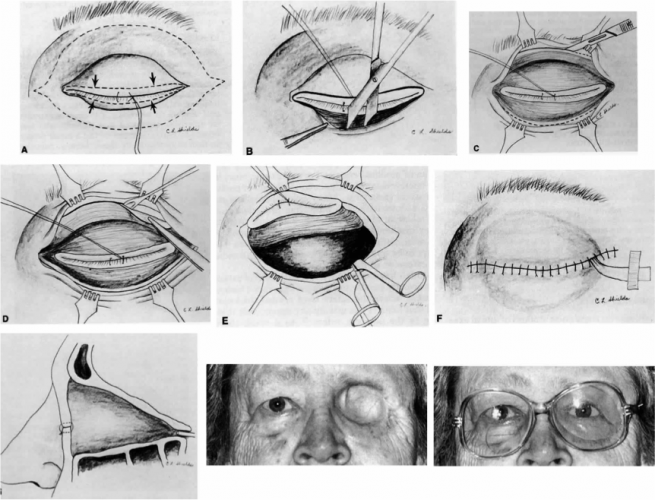 Fig. 8. Orbital exenteration by eyelid-sparing technique. A. The skin incision for the eyelid-sparing exenteration is made about 2 mm outside the cilia. B. Skin incision has been completed and the soft tissues are being dissected down to the bony rim for 360°. C. The periosteum has been exposed for 360° at the orbital rim, and the Bard-Parker knife is being used to cut through the periosteum down to the bone. D. The periosteal elevator is being used to separate the periosteum from the bone. The forceps are being used to put the periosteum on stretch during this procedure. E. Enucleation scissors have been inserted inferonasally and are prepared for cutting the optic nerve and other structures at the orbital apex. F. Frontal view of final closure with interrupted 5-0 silk sutures. G.Sagittal view of final closure. Note that the sutures have brought the upper and lower eyelids together and the orbital cavity is bare. H.Facial photograph of patient 4 weeks after eyelid-sparing orbital exenteration. Note the smooth cutaneous lining to the orbital cavity. I.Same patient after fitting of a prosthesis into spectacle frames (4).

Two 4-0 silk tarsorrhaphy sutures are placed which will also act as traction sutures throughout the case. A monopolar cautery is then used to make an incision through the skin and orbicularis muscle at the orbital rim 360 degrees. Dissection is the carried out to the orbital rim laterally as well as inferiorly. The superior orbital rim is identified and the periosteum is elevated. The lateral orbital rim is incised along the periosteum. Superiorly, the periosteum is elevated from the orbital rim. Laterally the periosteum is elevated from the lateral orbital rim and lateral wall. In this area one will usually encounter structures corresponding to the zygomatico facial and zygomatico maxillary neurovascular bundles. The supraorbital neurovascular bundle is identified and transected with the monopolar cautery. Medially, the anterior ethmoidal neurovascular bundle is identified and cauterized. It is important to not compromise the thin bone of the medial orbital wall to prevent sino-orbitl fistula formation. Posteriorly, the posterior ethmoidal neurovascular bundle is identified and cauterized. After transection of the infraorbital fissure as well as the nasolacrimal duct, the curved scissors are used to transect the posterior obit. In doing this, the ophthalmic artery is transected and there is significant bleeding. One can apply a snare prior to transection. Inspection of the excised orbit shows that the periosteum is largely intact other than the posterior orbit. Hemostasis is attained with the bipolar cautery. A posterior orbital biopsy can be obtained if needed. The area is then packed for hemostasis prior to harvesting of the split thickness skin graft. Other options for covering the defect or reconstruction include granulation, use of local flaps such as a cheek lift and median forehead flap, and use of a free flap[8]. More recently, Integra Dermal Regeneration Template, which is an advanced bovine bilayer silicone and collagen dermal replacement layer, has been used to line the sockets with good success.

There are few major complications of orbital exenteration. Potential surgical complications include extensive bleeding, which may rarely necessitate a blood transfusion. The thin ethmoid bones can be fractured during the surgery, leading to an opening or fistula between the orbit and the nasal cavity. CSF leaks can occur. Postoperative infection can generally be controlled with appropriate antibiotics. Sloughing of the skin graft is of little consequence because the socket can be allowed to undergo granulation[7]. Intracranial infection is another potential complication of orbital exenteration which can be eliminated by obliterating the cavity in its entirety with soft-tissue free-flaps. This can provide for a safer and more therapeutic management of the socket leading to improved postoperative management and cosmetic outcome. Obliteration of the cavity provides a protective barrier that protects the cranium from a potential infection[9].

A retrospective study from MD Anderson identified 180 patients who were exenterated. The median follow-up for the cohort was 9.7 years (116 months) and the median overall survival (OS) was 73 months. The presence of perineural invasion was associated with shorter OS (P = .01) and PFS (P < .01). Positive margins compared to negative margins were associated with no change in OS (P = .15). Overall complication rates was 15%. Thus, it was concluded that orbital exenteration is a safe therapy for periocular and orbital tumor control. [10]