Ultramarathon-induced Corneal Edema is a transient condition that develops during prolonged physical exertion. 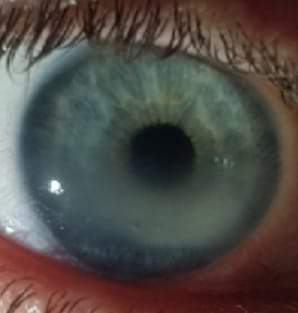 UMICE in a participant of a Crosscountry ski ultramarathon

Ultramarathon-induced Corneal Edema (UMICE) is corneal edema that develops during prolonged physical exertion, typically ultramarathons, and it usually resolves within hours after cessation of exercise (1). It is mostly described in foot races of ultramarathon distance (more than 42,2 km) but it may occur in shorter endurance distances and in other endurance sports such as bicycling (2) and cross-country ski ultramarathons (unpublished cases).

- Progressively painless blurred vision due to corneal edema in one or two eyes during prolonged physical exertion, typically races at ultramarathon distances. It reverses usually within hours after cessation of exertion.

- The vision loss has a blurry character but it may be profound.

- No photophobia or pain.

- The eye usually does not appear injected but may have a slighter bulbar injection.

It is not investigated whether corneal dystrophies or a low corneal endothelial cell count is a risk factor.

Corneal refractive surgery such as LASIK is a suspected risk factor (3).

External ambient factors causing stress to the cornea, such as wind exposure, are suspected risk factors (1).

By the time a participant of an endurance race has reached an ophthalmologist or a physician the condition may have reversed substantially, the vision may be back to normal and there might be none or only discrete signs left of earlier corneal edema, such as slight Descemet's folds.

However, the very typical set of signs, symptoms, settings and course of UMICE (see above) is helpful for the clinician.

- Neuro-ophthalmological transient visual losses will unlike UMICE typically be shorter in time, come and go in a quick manner and also give darkening of vision rather than blurring of vision. It will not cause corneal edema.

- Tear film deficiency will usually not lead to a cloudy cornea and the visual blurring will usually be less profound than in UMICE.

- Uhthoff's phenomena in optic neuritis (ON) gives visual disturbances during exercise but the cornea will not be hazy. It is likely to be a history of symptoms of ON from before and after the race, a demyelinating disease may be known and clinical signs of ON can be seen during the examination after the race. It will not cause corneal edema.

Differential diagnoses that can give rise to a rapidly hazy cornea include:

-A rapid and significant rise of intraocular pressure. Unlike UMICE this would typically cause distinct pain and red-eye. Pigment dispersion syndrome (PDS) could potentially create a similar clinical picture to UMICE as it can lead to the release of iris pigment during exercise leading to raised intraocular pressure and blurred vision. Signs of PDS are Krukenberg spindle, spoke like iris atrophies, excessive pigmentation of the trabecular meshwork. Similar symptoms of PDS could happen in Uveitis-Glaucoma-Hyphema Syndrome where chafing from an intraocular lens (IOL) implants leads to pigment dispersion or hemorrhages.

-Contact lens irritation can be differentiated from UMICE as it comes with a more superficial and epithelial hypoxic edema and as it commonly gives rise to a burning sensation or pain.

-“Eye dryness” is typically associated with foreign body sensation or pain and possibly eye redness. The cornea is usually not cloudy but it is a common cause of disturbed vision.

-Spontaneous or nonspontaneous corneal epithelial erosion is unlike UMICE associated with pain and photophobia.

-“Frozen cornea” or “wind blindness” is a painful condition that occurs in cold climates and has been described in skiers and sled dog drivers (4).

The current theory is that UMICE is caused by lactate-build up within the cornea leading to corneal edema by means of osmosis and by affecting the corneal endothelial pump. Lactate is a known metabolite in the corneal metabolism and it is well known that corneal accumulation of lactate can lead to corneal edema. A combination of external corneal stress, such as from wind or sweat, leading to raised internal corneal lactate production together with a systemic progressive rise of lactate in the blood and aqueous during prolonged physical exertion is thought to lead to the corneal lactate build up with subsequent edema. (5).

Prophylactic measures that seem to help are lubricant drops and protective eyewear (3).

As UMICE already has developed cessation of exercise is the only known effective treatment.

Blurred vision has lead to physical injuries during races (1).

Long term effects on the cornea are not known and have not been studied.

Long term effects on the cornea are not known and have not been studied.

if they are to engage in similar races again as recurrences have been observed (3).