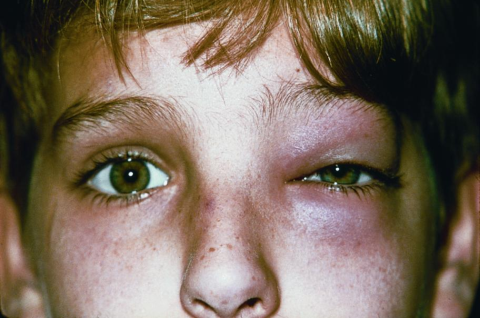 There are three main routes for pathogen inoculation in the periorbital tissues:

The venous drainage of the orbit, eyelids and sinuses goes primarily to the superior and inferior orbital veins, which drain to the cavernous sinus. Because these veins are devoid of valves, infection easily can spread to preseptal and postseptal space, and can also lead to cavernous sinus thrombosis.

A modification of Chandler’s classification of periorbital infections is still in use by many clinicians:

The majority of these infections are caused by bacteria. Adenovirus, herpes simplex and varicella zoster are also associated to cellulitis. In the immunocompromised patient we must suspect fungi as a possible etiology. Gram positive cocci are the most prevalent microorganisms identified in preseptal cellulitis - typically Staphylococcus and Streptococcus species (pyogenes and pneumonia). Staphylococcus aureus and epidermidis are commonly found after a penetrating eyelid trauma. Streptococcus pneumoniae is a common etiology in preseptal cellulitis secondary to sinusitis. In the era before the establishment of the universal vaccination against Haemophilus influenza type b, this was a frequent etiology especially in children under 5 years of age. It is still common in unvaccinated patients. In preseptal cellulitis secondary to a human bite it is frequent to isolate anaerobic bacteria such as Clostridium.

Patients complain of eyelid swelling and redness. But also general malaise and low grade fever are commonly reported. Among the classic signs of preseptal cellulitis are eyelid edema/erythema/warmth and fever. There are clinical keys that help us distinguish between preseptal and orbital cellulitis.

Cellulitis may extend to the cheek and forehead. Also, it is common to see an eyelid abscess associated with preseptal cellulitis, which may require incision and drainage.

It is useful to delineate the area of the face affected with cellulitis using a skin marker, in order to monitor progression along time. Photographs are also an invaluable tool.

Once diagnosed, preseptal cellulitis can be treated in an outpatient or inpatient basis depending on the characteristics of the patient.

These patients should be treated by a multidisciplinary team: ophthalmologist, pediatrician/primary care physician and ENT (in case of an associated sinusitis).

The results of antibiotic sensitivities should guide the treatment whenever possible. When the cultures reveal a methicillin-resistant Staphylococcus aureus (MRSA) the therapy choice must be reevaluated. Community associated MRSA is susceptible to these antibiotics administered in an oral route:

Hospital-associated MRSA is susceptible only to:

If there was a penetrating eyelid injury with organic material or a human bite, antibiotics should also cover anaerobic organisms: Metronidazole, Clindamycin, Piperacillin-Tazobactam.

If an abscess localized in the preseptal space develops, it should be incised and drained. The surgeon must not open the orbital septum during the procedure, since this may spread the infection to the postseptal space and aggravate the infection. As mentioned in the work up section, the contents of the abscess should be cultured to determine appropriate antibiotic therapy.

Prognosis is usually good when this entity is promptly diagnosed and treated. However, complications can develop even with prompt treatment.