There are two significant optical axes of the eye – the optical axis and the visual axis, which are also referred to in literature as the pupillary axis and the line of sight, respectively. The optical axis is composed of an imaginary line perpendicular to the cornea that intersects the center of the entrance pupil.[1] In comparison, the visual axis is an imaginary line that connects the object in space, the center of the entrance and exit pupil, and the center of the fovea.[1] The visual axis has also been referred to as the foveal-fixation axis. Due to the fact that the fovea lies temporal to where the pupillary axis intersects the posterior pole, a positive angle is formed between the two axes, which is called angle kappa (FIGURE 1).[1]

In other literature angle kappa has been called angle lambda and, more recently, CW (Chang-Waring) chord (Figure 2).[2] CW chord refers specifically to the angle between the subject-fixated coaxially sighted corneal light reflex to the pupil center.

The optical axis, the visual axis, and the angle kappa are represented on physical exam by the distance between the pupillary center and the corneal light reflex. The angle kappa has been further measured by different corneal topography systems, including Syntophore and Orbscan (Bausch and Lomb, Rochetser, NY).[3] [4] [5]

Angle kappa tends to be larger in hyperopic eyes compared to myopic eyes, which can be clinically significant as will be discussed in the following section.[3] [4] [5] Additionally, angle kappa tends to be larger in left eyes than right eyes, and in exotropes compared to esotropes. [4] One study showed that angle kappa decreases with age, but the decrease does not appear to be clinically significant.[6]

In patients with significant hyperopia refractive surgery outcomes can differ depending on where the laser focuses during the procedure. Studies have looked at outcomes in LASIK surgery when focusing on 1) the center of the pupil,[7] 2) the corneal light reflex,[8] [9] [10] [11] 3) the corneal vertex,[12] and 4) halfway between the center of the pupil and the corneal light reflex in patients with a large angle kappa.[13] A systematic review of these studies revealed that, in patients with significant hyperopia, centering on the corneal light reflex results in better corrected and uncorrected visual acuity,[9] [10] less decentration of the ablation zone,[11] and less higher order aberrations.[13] The same conclusions cannot be made for mild hyperopes with smaller angle kappas,[14] so for these patients it may be equally safe and efficacious to center over the pupil. 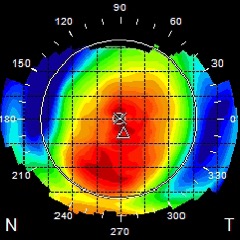 Angle kappa may also be a significant factor when performing refractive surgery in myopic individuals. Okamoto et al described that approximately 30% of myopic LASIK candidates have an angle kappa large enough to warrant centering closer to the visual axis.[15] Additionally, Arbelaez et al compared the outcomes in LASIK centered over the pupil to LASIK centered over the corneal vertex in 52 myopic patients with a moderate to large angle kappa.[16] The corneal vertex centered treatments performed better in terms of induced ocular aberrations and asphericity, but there was no difference in photopic visual acuity. 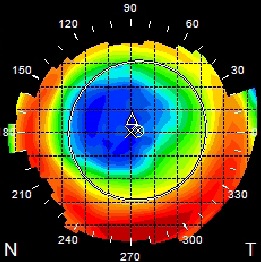 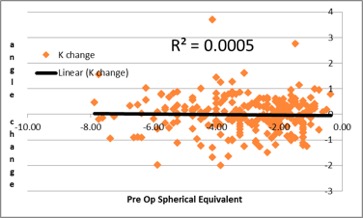 Corneal inlays are used to correct presbyopia. There are various types of corneal inlays: refractive corneal inlays, which work by changing the corneal refractive index; corneal reshaping inlays which change the curvature of the anterior corneal surface; and small aperture inlays, which take advantage of pinhole optics to improve vision.[17] For optimal outcomes, centration of the inlay is very important. In patients with a significantly large angle kappa, the center of the inlay - identified by the co-axially sighted corneal light reflex - should be placed halfway between the corneal vertex and the center of the entrance pupil.[18]

Small Incision Lenticule Extraction (SMILE) is a type of laser refractory surgery to treat myopia and astigmatism. SMILE does not involve cutting a flap in the cornea like LASIK. The adjustment of the intraoperative angle kappa during the SMILE procedure was found to result in less higher-order aberrations.[19]

When considering using a multifocal IOL (MFIOL) in cataract surgery, it may be beneficial to consider the angle kappa, especially for hyperopic patients with a large angle kappa.[20] [21] Studies have shown that eyes with a larger angle kappa are correlated with more glare and more halos after cataract surgery with placement of multifocal IOLs.[21] The theory is that if decentered, which is more likely to happen in eyes with a high angle kappa, the light rays miss the central optic zone and pass through a multifocal ring, resulting in the glare and halos.[22] Some methods that have been looked at to accommodate for a large angle kappa in cataract surgery with MFIOL include, 1) decentering the MFIOL towards the visual axis and gluing one haptic in place,[21] 2) post-operative pupilloplasty with argon Laser to center the pupil more closely to the visual axis,[23] and 3) centering the capsulorrhexis on the coaxially sighted corneal light reflex.[2][24] By aligning Purkinje Images 1 and 4, the visual axis can be identified and the capsulorrhexis can be centered appropriately. 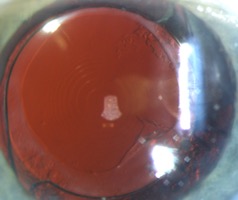 FIGURE 6 - decentration of MF-IOL as a result of insufficient polishing and cortical clean up (Courtesy of Hoon Jung, MD)

In pediatric patients, the corneal light reflex and red reflex are the basis of the Hirschberg and Bruckner tests which are used to assess for strabismus, a condition in which the optical axes are not aligned (Figure 3).[25]

The Hirschberg test involves shining a light directed at the patient’s eyes while asking them to fixate on the light source. The cornea light reflex can then be observed by locating a small pinpoint reflection of the light on the patient’s pupil. Under normal alignment, the light reflex should be displaced nasally by 0.5mm in adults. In contrast, every 1mm of deviation roughly corresponds to 7° or 15 diopters of deviation. These measurements guide surgeons when correcting strabismus.[26] For example, if correcting a 30-diopter esotropia, it is recommended to recess the medial rectus 5mm from its original insertion point.

The Brückner method is another screening test to assess for strabismus.[25] In this test, an ophthalmoscope is used to look for the red reflex simultaneously in both eyes. If strabismus is present, the eye will exhibit a lighter and brighter reflex than compared to the other eye. The Brückner method, in comparison to the Hirschberg measurement, does not attempt to quantify the degree of deviation.

Because the fovea is one of the terminal points of the visual axis, any pathology that disrupts the foveal anatomic location can lead to alterations to this axis. In entities such as choroidal neovascularization from age-related macular degeneration (AMD), the contour and location of the fovea is altered.[27] Macular translocation was a historical intentional surgical technique in patients with AMD not commonly performed today.[28] [29] Altered optical axes are more commonly seen in pathologies causing drag of the fovea such as in retinopathy of prematurity or familial exudative vitreoretinopathy. 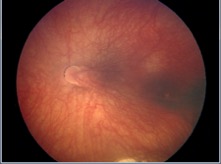 FIGURE 8 -Photo of dragged macula from retinopathy of prematurity causing a shift in angle kappa (Courtesy of Francine Baran, MD)

Optical axes include the optical axis and the visual axis, which form the angle kappa. This angle kappa has is an important clinical parameter, which has implications when it comes to refractive surgery, cataract surgery, strabismus, and even surgeries involving the retina and macula.