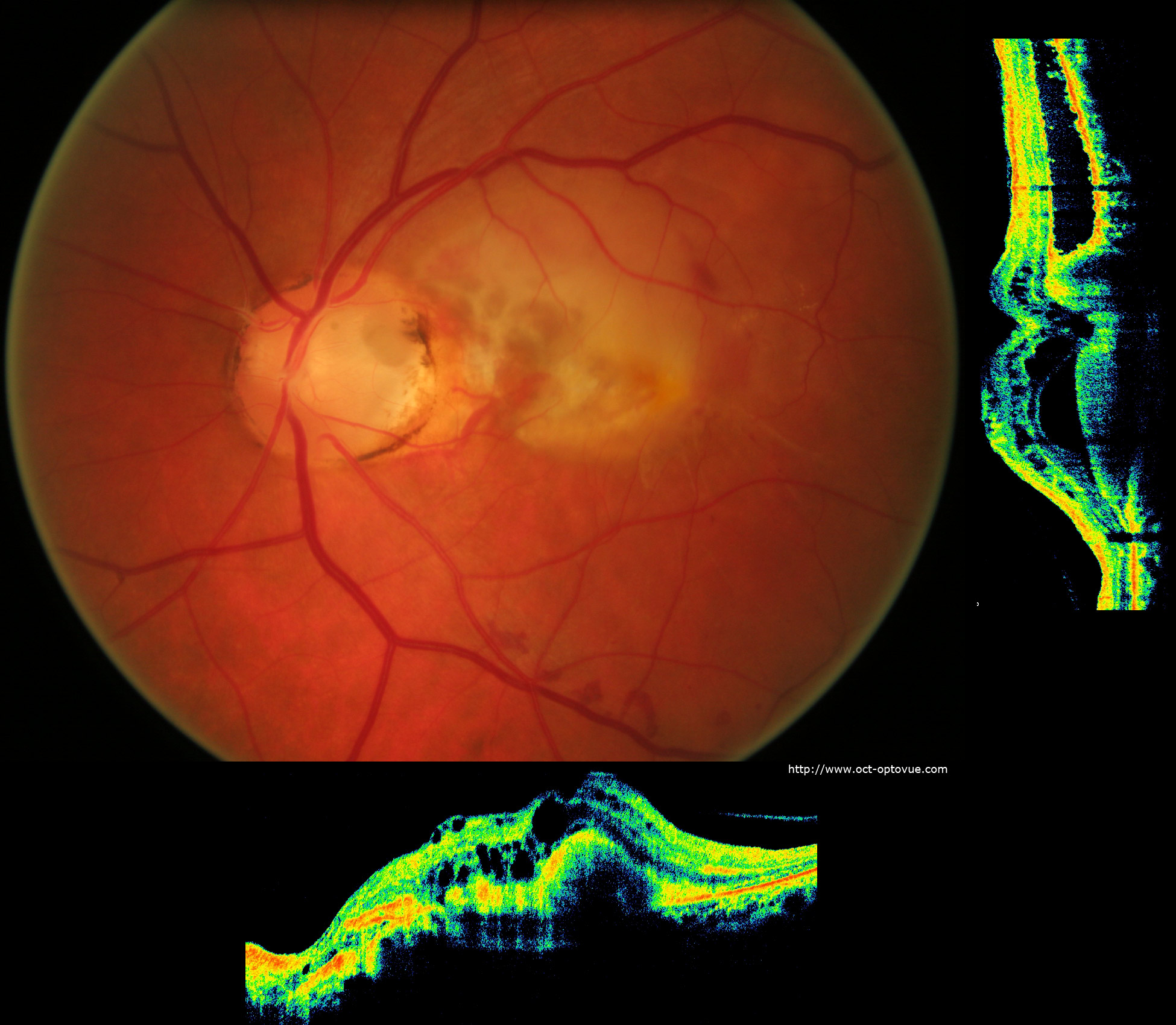 Wiethe first described the clinical presentation of two optic disc depressions in a 62-year-old female patient in 1882; this entity was later termed “optic disc pit.” Other abnormalities such as nerve head coloboma and enlarged optic nerve head may be seen with the pits.

Etiology of optic disc pits is unclear. Congenital optic pits are thought to result from an imperfect closure of the superior edge of the embryonic fissure. Histologically, herniation of a dysplastic retina into the subarachnoid space through a defect in the lamina cribrosa at the pit has also been described.

Optic pits are rare, and occur in about 1 in 10,000 people with no gender predilection. They can be diagnosed in children or adults. There are no known risk factors. It has been suggested that unilateral pits may be inherited in an autosomal dominant fashion.

Pathophysiology of optic disc pits is unclear. Some hypothesize that they occur due to incomplete closure of the optic fissure resulting in a microcommunication between the subarachnoid space and the pit. The communication of Optic Pits and Cerebral Spinal Fluid (CSF) is controversial and Beta-2 Transferrin levels (typically used for CSF detection in leaks from skull fractures) of submacular fluid associated with optic pits has been variable. Many believe that pits are not colobomas. Pits are usually not found close to the optic fissure and are more unilateral than bilateral and only rarely seen with iris or choroidal colobomas. Absence of lamina cribrosa is noted at the site of the pit. Closed optic nerve pits can be associated with meningeal cysts.

Optic pit formation occurs in utero and there is no known primary prevention.

The diagnosis of an optic pit is based on morphology of the nerve and is observed via clinical examination. They are usually unilateral, though 10-15% are bilateral. Usually there is only one pit per disc, however, two to three pits have been described in the same optic nerve.

Patients are generally asymptomatic and findings are usually incidentally found on routine exam. However, patients may complain of metamophopsia, micropsia, blurred or decreased vision, or a blind spot if the optic pit is associated with a serous retinal detachment.

Optic pits are generally found inferotemporally within the nerve, though up to one-third are central. They appear as a round or oval depression that differs in color from the surrounding disc (grey, yellow or black). The color variation depends on the amount and location of glial tissue in the pit. The size can vary from 0.1-0.7 disc diameters and the depth from 0.3-0.5 diopters. There may associated macular edema, serous macular detachment; schisis or pigmentary changes in the macula.

A pit can be seen with direct or indirect ophthalmoscopy. For detailed evaluation, slit lamp biomicroscopic binocular examination should be performed.

Pits are often asymptomatic though they can be associated with vision loss from a secondary serous retinal detachment (sometimes referred to as Optic Disc Pit Maculopathy). Occasionally, visual field deficits, arcuate scotoma or an enlarged blind spot, can be detected on perimetry.

Shallow serous macular detachments can be seen in upto three-fourths of eyes with inferotemporal pits. They usually become symptomatic in the 3rd or 4th decade of life though reports in children have been described.

The source of the retinal fluid in optic disc pit maculopathy is controversial; the reports in literature describe it to be vitreous, cerebrospinal fluid, and even in some cases fluid from blood vessels in the pit.

Spectral-domain optical coherence tomography (SD-OCT) can be used to determine if trace amounts of subretinal fluid exists when it is not apparent clinically. OCT of an optic pit may show a schisis-like separation between the inner and outer retina.

Visual field testing can show an enlarged blind spot as well as a relative central scotoma in the presence of a serous detachment.

Fluorescein Angiography (FA) is not particularly useful in diagnosing optic pits though it may be helpful in eliminating other diseases in the differential of serous detachment.

An Amsler grid can be used to monitor the onset of macular involvement of an optic pit with serous detachment.

The diagnosis of an optic pit is clinical. Though no laboratory test exists there are studies in progress looking at genetic markers.

No treatment is required for an isolated optic pit.

There is no medical therapy that is indicated for this structural defect.

It may be possible to repair a serous detachment when associated with a pit. Techniques include laser photocoagulation, which can be applied to the temporal margin of the optic disc in the effort to disrupt the communication between the source (the optic pit) and the collection of fluid under the macula.

Pars plana vitrectomy (PPV) with posterior vitreous detachment with gas tamponade (using gases such as C3F8 or SF6) may be used to treat serous detachment associated with an optic pit. Successful macular reattachment leading to possible improved central vision can be achieved using vitrectomy. The purpose of this is to induce a posterior vitreous detachment (PVD) and help remove vitreous traction. Peeling of the internal limiting membrane may also be employed in addition to removing the vitreous for relieving all tractional components along with peeling of glial tissue in the pit. Use of peri-papillary laser during vitrectomy is controversial. Anatomic success has been reported with or without it.

Another surgical technique is macular buckling. This type of posterior scleral buckle is placed when the pathology only involves macula. Though less commonly used, it is an option for repair that may obviate the lens changes associated with PPV, and may be considered in younger, phakic patients. More recently, peri-papillary retinotomy. A recently described technique, limited PPV with intraretinal fenestration temporal to the pit has had promising results.

Given the proximity to the optic nerve and macula, great care must be taken during photocoagulation. Scotoma can result with laser treament.

Isolated optic pits have an excellent prognosis and usually have no sequelae. It is unclear how many optic pits develop serous detachments as these instances are symptomatic and therefore seek out the care of an ophthalmologist more frequently than those asymptomatic (reports of up to 50% of cases are from retrospective reviews and most likely subject to selection bias). The visual recovery of a serous detachment from an optic pit is dependent on the chronicity of the detachment and success of the repair. Some serous collections, when associated with traction, may resolve without treatment if the traction resolves (for example with formation of a complete, spontaneous PVD.