Choroidal folds are lines, grooves or striae predominantly involving the posterior pole of the eye which appear as alternating light and dark lines on fluorescein angiography. They are often arranged in a parallel and horizontal fashion but may be vertical, oblique, or irregular. These folds reflect the undulations of the choroid, retinal pigment epithelium and the overlying neurosensory retina and tend to vary in length and width, rarely extending beyond the equator. [1] [2] [3] [4] 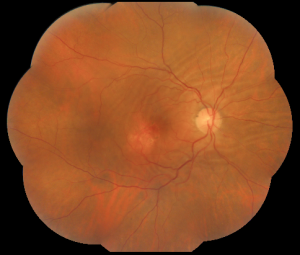 They were first described clinically by Nettleship et al., as choroidal folds and then subsequently re-termed as "chorioretinal folds" by Gass to encompass the entire pathology seen clinically.[5] [6] These have been associated with a variety of ocular and orbital conditions such as acquired hyperopia, posterior scleritis, retrobulbar/orbital tumors, thyroid eye disease or Grave´s ophthalmopathy, choroidal naevi and tumors, optic nerve drusen, microphthalmos, following ophthalmic surgery (e.g. scleral buckling for retinal detachment or hypotony after trabeculectomy), hypotony, central serous chorioretinopathy, idiopathic intracranial hypertension or secondary pseudotumour cerebri syndrome and orbital cellulitis.[7] [8] [9]When no obvious cause is found, choroidal folds are classified as idiopathic.[10] [11]

In the literature, the two largest case series of choroidal folds[3][12] as well as many other reports identified hyperopia and AMD as the most common associated conditions. A significant number of cases was considered idiopathic although with improved diagnostic testing, the patients formerly referred to as idiopathic actually represented a smaller portion of the total.

An important topic to be mentioned is the possible (and sometimes inevitable) confusion between truly idiopathic choroidal folds and those associated with elevated intracranial pressure in which the optic nerve sheath becomes distended, which may in turn press on the globe causing distortion and hence choroidal folds[18] [19]. The findings may essentially be related to the timing of the evaluation. In some cases, the choroidal folds precede the development of papilloedema which suggests that the elevated intra-sheath pressure produces indentation of the globe before there is any reduction in retrolaminar perfusion and axoplasmic stasis.[20] In other cases choroidal folds may be present after the resolution of papilledema. It is possible that in the initial stages the globe is flattened together with distortion and folding of the choroid producing a hypermetropic shift[3] [7][21] [22] [18], and that later on when intracranial pressure is reduced and the papilloedema resolves, the mass effect of the distended nerve sheath on the globe is removed, allowing the refractive state of the eye to return to normal, but with the persistence of the choroidal folds.[23] Another explanation for this phenomenon is that retrolaminar optic nerve sheath enlargement may cause slight indentation of the posterior globe without causing obvious optic nerve head swelling. That is, the optic nerve sheath may distend enough to compress the retrolaminar globe, but the axons may not swell despite an increase in intracranial pressure.[23] Jacobson et. al have postulated that cases of acquired hyperopia with choroidal folds may also be a result of subclinical increases in intracranial pressure.[18] He suggested that the acquired hyperopia was a result of elevated pressure in the optic nerve sheath compressing the subarachnoid compartment and flattening the globe evident on neuroimaging and ultrasound evaluation. Unilateral cases of choroidal folds are associated with a higher frequency of orbital disease and with more significant ocular disease (e.g. scleritis, tumors, retinal vascular occlusion, and hypotony) than bilateral presentations, which are more associated with unknown causes and acquired hyperopia.[21][24]

The exact pathogenesis of choroidal folds is unknown, but it is believed that conditions causing thickening or shortening of the sclera, choroidal thickening and/or enlargement of various retrobulbar orbital structures, such as the optic nerve, the extraocular muscles, or Tenon's space produce wrinkling of Bruch’s membrane and the adjacent layers of the choroid and retinal pigment epithelium.[3][21] [22] [13][25]

Friberg et. al. were the first to explain the pathophysiology of choroidal folds based on biomechanical principles.[26] They postulated that choroidal folds are produced locally when the net compressive forces within the choroid, retinal pigment epithelium and Bruch’s membrane complex are of a sufficient magnitude to buckle or fold Bruch’s membrane and the retinal pigment epithelium. They emphasized that the magnitude of this force must exceed the counteracting tensile force within the choroid secondary to the intraocular pressure.[17] In a study with indocyanine green angiography, Haruyama et al. showed delayed filling in choroidal vessels during the early transit phase followed by choroidal venous dilation, suggesting choroidal vascular congestion in patients with choroidal folds.[14] This vascular congestion may result from resistance of choroidal outflow secondary to extravascular interstitial edema that accompanies many inflammatory conditions as well as from structural alterations within the scleral wall impairing choroidal filling or venous outflow.[27] 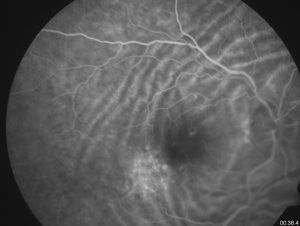 Fluorescein angiography shows an increased stippled hyperfluorescence with late staining corresponding to an area of pigmentary disturbance in the right eye. The folds are seen prominently due to their classic alternating hypo and hyperfluorescence

Fluorescein angiography cannot differentiate chorioretinal from choroidal folds, but the optical coherence tomography (OCT) patterns of the two are strikingly different although these are not completely singular entities. In cases of chorioretinal folds, OCT shows that the retina, RPE and choroid are all folded in a similar manner and maintain their normal relationships and apparently normal thickness, although a certain flattening of the inner retina can be seen along the crests, whereas choroidal folds correspond to undulations of the hyperreflective line corresponding to the RPE as well as the underlying choroid with a flat or nearly flat retinal surface with a variable retinal thickness variable, increasing in correspondence to the valleys and reducing in the crests. The retina, which has a softer structure, adapts itself to the wrinkling to preserve a flat inner surface.[19]

Optical coherence tomography shows the characteristic undulations of the RPE consistent with choroidal folds with a nearly flat retinal surface and a variable retinal thickness, increasing in correspondence to the valleys and reducing in the crests.

Ultrasound, computed tomography (CT) or magnetic resonance (MR) scanning of the orbits or brain may be indicated. The characteristic CT and ultrasonography findings of acquired hyperopia with choroidal folds are variable enlargement of the optic nerve image, a sometimes discernible space between the nerve and its sheath, distension of the peri-optic subarachnoid space, scleral shortening and congestive choroidal thickening.[4] [21] [26] [24]

Linear signals of a decrease in choriocapillaris perfusion associated with choroidal folds can be seen on OCT angiography. [28]

Depending upon their location and onset, choroidal folds can be asymptomatic or lead to metamorphopsia and decreased vision. When the folds involve the macula, they may or may not affect visual acuity, normally through acute distortion of the overlying retinal photoreceptors, chorioretinal folds-related maculopathy (see below) or when associated with retinal disease. The syndrome of acquired hyperopia with choroidal folds is characterized by a painless loss in vision resulting from a hyperopic shift in their refractive error but where visual acuity typically returns to baseline levels with an increase in hyperopic correction.[4][26]

There is sufficient evidence that as soon as choroidal folds are recognized, a prompt systemic investigation for a specific diagnosis or cause is mandatory in order to diagnose treatable causes or to exclude potentially serious conditions.

The presence of macular pathologic features secondary to chronic folds was reported first by Newell, who noted cases of RPE pigment clumping and atrophy as well as linear streaks of fluorescein staining along the folds. Olsen et al.[22] also reported that chronic choroidal folds involving the macula may result in a unique maculopathy that they called chorioretinal folds-related maculopathy (CRF-related maculopathy). In this condition there is usually an insidious progression and gradual decline in visual acuity over time associated with either a yellow, luteal macular appearance or atrophy of the retinal pigment epithelium as well as areas of retinal pigment epithelium hyperplasia. The choroidal vascular abnormalities reported by Haruyama et al.[23] may also result in an ischemic choroidal environment which in conjunction with tensile stress created by long-standing choroidal folds on the Bruch membrane–choroid complex create an ideal situation for Bruch membrane fracture and formation of choroidal neovascularization[22][20], and monitoring for the development of choroidal neovascularization is advised.[29] Nonetheless, in the series reported by Olsen et al. visual acuity loss seems to result mostly from degenerative changes to the retinal pigment epithelium–Bruchs complex. CRF-related maculopathy has a slow and indolent course with gradual macular dysfunction that evolves over many years[22] and careful monitoring of the retina (especially the macula) should therefore be undertaken at regular intervals.[4]

If the folds are longstanding, vision may be preserved[19] [20] unless a secondary maculopathy develops. The overall prognosis is otherwise excellent if no serious associated condition is diagnosed.