Sickle Cell Retinopathy is recognized by the following codes as per the International Classification of Diseases (ICD) nomenclature:

Retinal hemorrhage associated with SCD was first published in a case report by Cook in 1930. In 1937, Harden demonstrated a consistent finding of dilated and tortuous retinal vessels in patients with SCD, and this finding was further substantiated by Klinefelter in 1942. However, it was not until 1942 that the underlying mechanism of sickle cell retinopathy was proposed. Ray and Cecil suggested that occlusion of small vessels by sickled erythrocytes caused the observed changes in retina. This work was further driven by Verhoeff, who, in 1947, provided pathophysiological basis of vitreous hemorrhage, neovascularization and infarction due to sickled cells[1].

Normal blood cells that are round and oval can easily pass through smaller blood vessels including capillaries. However, local hypoxic conditions alter the shape of the red cells in SCD patients, leading to rigid, sickle-shaped red blood cells (RBCs), due to the irreversible conversion of soluble hemoglobin into crystalline hemoglobin. Changes in the adhesive properties of capillary endothelial cells due to hypoxia lead to deceased vascular flow and occlusion of vessels.[5]This trapping of sickle-shaped red cells in the small blood vessels in various structures of the eye, both in the anterior and posterior segments, leads to characteristic damage. The clinical manifestations vary depending on the presence or absence of vaso-proliferative changes. Hence, this disease can be classified as non-proliferative sickle cell retinopathy (NPSR) and proliferative sickle cell retinopathy (PSR).[6]

The retinal changes in NPSR occur secondary to vaso-occlusion and local ischemia. Occlusion of retinal vasculature first appears in the peripheral retina as “salmon patches”, which represent retinal hemorrhage from superficial blood vessels. These lesions are round or oval in shape and can be elevated or flattened (Figure 1).[7]Although they are initially red, they become salmon-colored due to the hemolysis of red blood cells. Over time, the hemorrhage is resorbed and the area appears normal with refractile deposits, which are iridescent spots of hemosiderin and macrophage deposition just beneath the internal limiting membrane. Migration and proliferation of retinal pigment epithelium (RPE) leads to the development of black sunburst spots which likely occur in response to hemorrhage.[8] Reduction in visual acuity is usually from the occlusion of perifoveal capillaries, causing a concave macular depression from RPE degeneration. Occlusions in the choroidal circulation with associated breaks in Bruch’s membrane are known to cause angioid streaks, a phenomenon seen in many retinal diseases including NPSR and PSR. 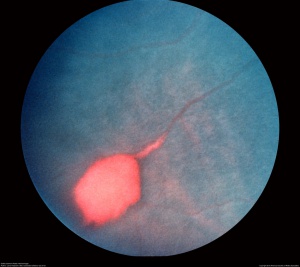 As noted above, the ocular complications of PSR are more characteristically seen in HbSC and SThal disease, rather than in SS disease. As localized vascular occlusion leads to the changes described above in NPSR, chronic changes of local hypoxia and ischemia lead to the upregulation of vascular growth factors, which may result in retinal neovascularization, pre-retinal or vitreous hemorrhage and tractional retinal detachment. 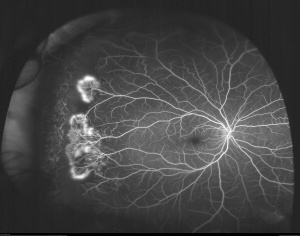 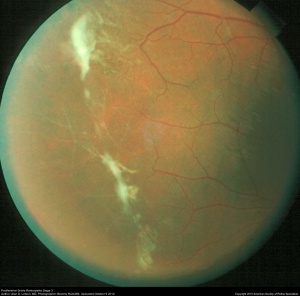 Vaso-occlusion of conjunctival vessels leads to the development of “comma” shaped vessels due to the accumulation of sickled RBCs at the distal end of the capillaries.[12]

Patients may see flashes, floaters or dark shadows, which may be indicative of vitreoretinal traction or detachment.

Presence of traumatic hyphema in African Americans warrants testing the patients for sickle cell hemoglobinopathies due to ocular complications that can result from sickle red blood cells. To control intraocular pressure, use of carbonic anhydrase inhibitors, especially acetazolamide, is contraindicated as it induces systemic acidosis and increases the local concentration of ascorbic acid in the aqueous humor; hence, the resulting low pH enhances sickling of RBCs. Instead of acetazolamide, the use of methazolamide is recommended.[14] [15]

The goal of screening is to identify patients with retinopathy and to schedule follow-up or treatment as warranted by their level of disease. Recently, imaging techniques have led to identification of retinal thinning and ischemia in patients who do not have significant or even any retinopathy.

Ocular Imaging with SDOCT has been shown to be helpful in identification of patients with retinal thinning related to sickle cell retinopathy. Retinal thinning has been associated with decreased retinal sensitivity as shown by microperimetry.[17] [18] SDOCT imaging has also identified differences in degrees of retinal thinning amongst hemoglobin subtypes. Age, stage of retinopathy, hemoglobin SS subtype and some systemic conditions are associated with more severe retinal thinning. Despite these retinal changes, good visual acuity may be maintained. Of course, when retinal arterial occlusions involving major retinal vessels occur, visual acuity is affected. OCT angiography (OCTA) has also shown significant changes even in children without structural damage. [19]

There is no therapy at present for non-proliferative sickle cell retinopathy.

Therapy for PSR stage 3 is to prevent bleeding and development of retinal detachment. Complete ophthalmic examination at least yearly is recommended for sickle cell patients (SC, SS, S-thal, etc). SDOCT and OCTA imaging add to the clinical staging of the disease and may be performed. Baseline fluorescein angiography may be performed to examine blood flow in the retina and choroid as needed.

Since humans have an inherent ability to produce fetal hemoglobin, emerging therapies that stimulate fetal hemoglobin have been shown to be beneficial. For example, hydroxycarbamide treatment has been demonstrated to have a beneficial effect in children in preventing sickle cell retinopathy.[20] Similarly, reducing HbSS red blood cells by exchange transfusion has also shown to be beneficial.[21][22]Hyperbaric oxygen therapy may reverse the pathology and improve visual acuity.[23] [24] Hydroxyurea is often used and is believed to increase the levels of HgbF.

Feeder vessel photocoagulation to close sea fan structures with argon laser is largely of historic significance.[27] Scatter laser for treatment of seafans has been shown to be effective and safer than feeder vessel techniques. [28] In the focal scatter laser study, eyes treated with focal scatter developed new sea fans in 34.4% versus 41.3% in control eyes. In addition, prolonged visual loss from vitreous hemorrhage occurred less often in treated than control eyes (1 % vs. 6.7 %) and incidence of vitreous hemorrhage was also lower (Chi squared 4.5; p ≤ 0.05).

Scatter laser to surround seafans is the current treatment for seafans. [29] [30] [31] In the event of vitreous hemorrhage, patients need to be examined at regular intervals to document clearance and improvement in visual acuity.

Due to the risk of retinal detachment post-treatment, scatter photocoagulation is the preferred method of intervention to cause regression of sea fan structures if the sea fans do not auto-infarct. However, retinal tear and rhegmatogenous retinal detachments may occur after scatter photocoagulation. The rate of surgical complications in patients with PSR has been reported to be as high as 50% for traction/rhegmatogenous retinal detachment in a recent study.[32] Scleral buckling surgery also carries higher intra- and post-operative risk due to the induction of ocular ischemia and is generally not recommended. Pars plana vitrectomy has been reported with good outcomes. During vitrectomy, it is important to keep the intraocular pressure in the low normal range to avoid contributing to retinal infarction.