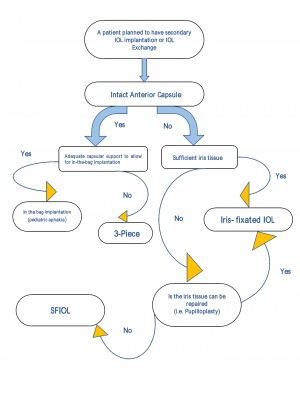 1. IOL exchange which can be done for different reasons:

2. After congenital cataract removal in children less than 1-2 years of age.

Before making the decision of which secondary IOL implantation technique is suitable to the individual patient, it is important to take several points in consideration.

First, history is important regrading the time of the previous surgey , trauma…..etc. Second, A detailed anterior segment examination including:

And finally, Posterior segment examination is valuable in case that some conditions limit the postoperative results or might need treatment at the same time of surgery.[1]

1. Single piece or 3-piece Foldable IOL in the bag

A novel technique was described for secondary IOL implantation in the bag for pediatric aphakia in 2011.

In this in the bag technique, the presence of soemmering’s ring and proliferating epithelial cells helped in maintenance of the potential space between the anterior and posterior capsule. This space between the two capsules is opened with an MVR 360 degree in small can-opener movement and the residual cortical material present is aspirated by a 20 gauge vitrectomy hand-piece in bimanual closed chamber technique followed by single piece foldable or 3-piece IOL implantation.[2]

2. 3 piece implantation in the ciliary sulcus

Usually 3 piece IOL is implanted in the ciliary sulcus with/without optic capture. The presence of intact anterior capsulorrhexis is a perquisite for this technique. Optic capture provides more stability and more centration of the IOL, preventing vitreous prolapse anterior to the IOL in addition to causing less myopic shift in comaprison with sulcus fixation alone.[3]

Placing the haptics in the ciliary sulcus with optic capture through the CCC is the best way ensuring long term IOL stability, nearly eliminates the risk of phimosis, and tends to decrease zonular damage.

In case of a very young patient or a patient who is expected to be uncooperative for future YAG capsulotomy, putting the haptics in the ciliary sulcus and the pushing the optic through both the CCC and posterior rrhexis which is called “ bicapsular capture “ provides very stable IOL configuration and less risk of decentration.[5]

Iris-fixated lenses were first described in 1954 ("collar stud": Epstein 1954, "iris-clip": Binkhorst 1959). In the early 1960s, Collar implanted the first iris-fixated lens after an intra-capsular cataract extraction, but in 1971, Worst came in with the Iris Claw lens, and its modification evolved in the Artisan lens.[6] [7]

Iris claw lens is an effective, predictable and safe option for aphakic eyes without capsule support, compared to other options, it has a quicker visual recovery, better visual outcomes and fewer complications than the other secondary IOL implantation options. Furthermore, its placement can be performed with a lower invasiveness and in a shorter surgical time what reduces the risk of photic retinal damage.[8] [9]

Iris claw lens can be implanted using either corneal incision or through a scleral tunnel (which is reported to cause less corneal endothelial cell loss, less astigmatism and a lower risk of wound leakage compared to corneal incision). [10] Implantation can be either Antepupillary or Retropupillary. Despite a higher incidence of IOL dislocation, it is reported that the retropupillary fixation offers the advantage with physiological posterior chamber implantation, resulting in a deeper anterior chamber and a lower intraoperative and postoperative risk of corneal de-compensation than anterior fixation. However, there is no evidence available about the best placement method for secondary iris-claw IOL implantation that offers the maximum and earliest visual recovery over many years and the lowest complication rate. A peripheral iridectomy is required to decrease the risk of pupillary block.[11] [12]

1. Removal of vitreous from the anterior chamber.

2. At least 270 degrees of iris tissue with pupil size smaller than 6 mm (suture pupilloplasty may be required to reform pupil to provide this).

IOP elevation can be a consequence of

as a consequence of a 5.5 mm corneal incision in eyes with previously incised cornea.[20]

4. Persistent ovalisation of the pupil

(reported in up to 13.9% of cases), especially in patients who underwent iris reconstruction and more frequently after retropupillary IOL implantation.[21] [22]

explanation of the macular oedema could be chronic low-grade irritation of the iris, this can be a result of: first, a lack of IOL stability causing movement of the IOL against the iris because insufficient iris tissue is captured in the claw or from iris progressive atrophy in the claw; secondly, microscopic imperfections in the surface of the IOL rubbing on the iris; and thirdly, malposition of the iris claw on the ciliary body. Another explanation for chronic, resistant cystoid macular oedema with iris-fixated IOLs is persistent vitreous traction after incomplete vitrectomy.[28]

Scleral fixated IOLs have gained increased popularity over the last decades but the history actually is dated back to 1980.

Scleral fixation of the IOL is indicated for secondary IOL implanation when there is no sufficient iris tissue or capsular bag to allow implantation of iris-fixation or sulcus IOL respectively but also it may be the preferred choice in patient with corneal decompensation or shallow AC even if there s an adequate iris tissue.

There are two ways to fixate an IOL to the sclera; suture-less and sutured fixation.

Sutures used are either 9-0 polypropylene, 7-0 Gore-tex (CV-8) or 6-0 prolene, and today the preferred IOL types are; CZ70BD (Alcon, Fort Worth, TX), enVista MX60 and the Akreos AO60 (Bausch and Lomb, Rochester, NY) which have eyelets for sutures.

The Bausch & Lomb Akreos AO60 hydrophilic acrylic lens with 4 eyelets is susceptible to calcification and opacification through calcium salt deposition when comes in contact with intraocular air or gas this makes it as an unpreferred choice for patients who may undergo posterior segment surgery while The Bausch & Lomb enVista Mx60 IOL with 2 eyelets is hydrophobic acrylic and does not opacify in contact with air or gas.

IOLs with 4 eyelets show more stability than the 2 eyelets IOLs in terms of less IOL tilt and decentration that may result in high order aberration uncorrectable by spectacles post-operatively and this was shown in several studies.

The first ab externo approach described by Lewis in 1991, used 10-0 polypropylene sutures and the sclerotomy sites are positioned 2 mm posterior to the limbus but several studies showed late suture breakage up to 8 years post-placement. For this reason, 9-0 polypropylene and Gore-tex sutures become more popular which show more suture stability on short term.

Complications of sutured-fixated IOL include:

Suture knot erosion carries the risk of endopthalmitis, therefore many attempts have been used to avoid this complication. Lewis introduced the creation of triangular scleral flap after conjunctival periotomy to cover the suture knots but this approach sacrifices the conjunctiva which presents a problem for patients who may undergo glaucoma surgery in the future. In 2005, Hoffman described the idea of creating scleral pockets without conjunctival periotomy with adequate coverage of the suture knots. Other ways described were the burying if the suture knots in the sclera which can be difficult in case of Gore-tex suture, and the avoidance of tying any knots by using the so called “Z- suture”. In this maneuver, the sutures are passed in zigzag fashion through the sclera and it was found that five passes are sufficient to secure the IOL.

This technique is used to avoid suture related complications such as erosion or breakage. The first sutureless approach was introduced by Scharioth et al. who used 24-gauge needle to create 50% thickness scleral tunnels 1.5 -2 mm posterior to the limbus, then a 3-piece IOL was implanted and its haptics externalized through the scleral tunnels leaving a small exposed part of the haptics between the scleral tunnel and sclerotomy sites.

Agarwal also described the use of handshake technique for easier externalization of the haptics. In this technique, he used a MST forceps to catch the first (leading) haptic of the 3-piece IOL and this is externalized through the sclerotomy site. The second (trailing) haptic is then flexed inside the eye with one hand, at the same time, a MST forceps is introduced with the other hand through a side port and catches the tip of the second haptic. Then, the first hand is released and another forceps introduced through the sclerotomy site catches the second haptic and externalized.[30] [31]

In 2014, Yamane et al. developed a new adaptation of sutureless scleral fixation in which the haptics of the implanted 3-piece are externalized using a 27- gauge needle and cauterized to create bulbs at the end of the haptics to provide more stability in the scleral tunnels. In this technique, Yamane used EC-3 PAL 3- piece IOLs which has more durable and malleable haptics in comparison with the 3-piece IOLs used in United States.[32] [33]

What to choose the sutured-scleral fixation or the sutureless method ?

Till now, there is no study proved the superiority of one method over the other . Ganekal and colleagues compared sutured SFIOLs with fibrin-glue assisted SFIOLs and found that both groups have similar visual acuity but higher rates of complications were noticed in the sutured SFIOLs group like postoperative glaucoma and inflammation.

Another study compared the sutured SFIOLs ( using the Hoffman technique) with Scharioth SIS technique and also there was no significant difference in VA between the two groups but two cases of SIS group developed IOL dislocation while no one developed this complication in the first group.[34]