Topography is derived from the Greek: “topos” (place) and “graphein” (to draw).  Corneal topography relates to a representation of the geometrical properties of the corneal surface it is a technique for measuring and evaluating its shape and curvature. [1][2] The advances in refractive surgery techniques have created the necessity for precise analysis of the corneal surface and shape. The conventional keratometer only measures close estimations of the anterior corneal curvature but is insufficient for the assessment of patients for refractive surgery. In recent years, rapid advances in corneal topography and tomography have paralleled those of excimer laser refractive surgery, and computerized corneal topography has become the standard of care in clinical practice.[1]

In the seventeenth century, Christopher Scheiner compared pictures formed by the impression of marbles on the cornea. [3] In 1880, Placido created a disk, involving the reflection of a series of concentric highly contrasting rings.[4] In the late nineteenth century, Javal and Schoitz, created the keratometer. This device focuses on the 3 - 4mm central area of the cornea, and assumes that the rest of the cornea has a sphero-cylindrical surface. More recently, the photokeratoscopes have been developed to assess the rest of the corneal surface. [1]

A fundamental component of the refractive surgery evaluation is the preoperative assessment of the cornea with topography. Its main goal is to detect epithelial irregularities and stromal abnormalities, evaluate corneal astigmatism, refractive stability or undetected corneal diseases.[5] It is essential that the patient maintains an adequate position and fixation in order to ensure a high-quality image.[1]

Laser refractive surgery is now widely used. In order to avoid ectasia secondary to the procedure, it is mandatory the detect subclinical keratoconus before surgery. There are several tools we can use to assess this disorder: corneal topography, pachymetry, and corneal aberrometry. Recent studies have reported tomographic measurements using optical coherence tomography and corneal biomechanical indices. Several factors can increase the risk of corneal ectasia after the procedure, such as age, keratometric indices, corneal elevation data, and corneal thickness.[6]

Incipient or subclinical keratoconus is usually asymptomatic and can be undetected in routine clinical practice. It is the most significant risk factor for the development of ectasia after laser refractive surgery.[7] To assess incipient keratoconus, it is necessary to use multiple parameters, algorithms and predictive models.[6]

In 1996, Rabinowitz et al., created a database of videokeratography patterns and quantitative indices based on the normal corneas of 390 eyes. They proposed 10 different topographical patterns.[9] They are: 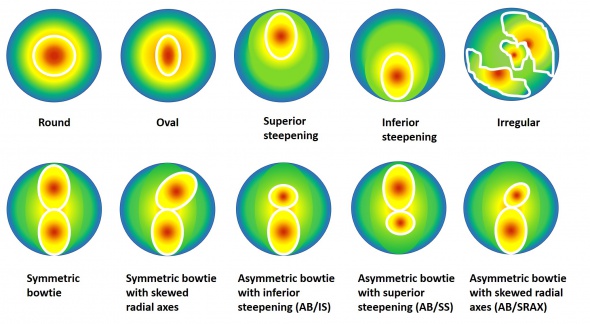 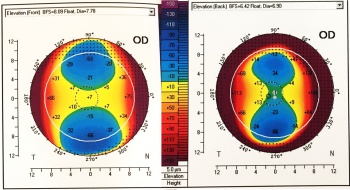 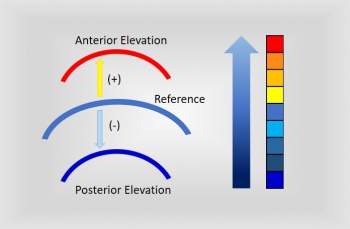 Elevation maps illustrate the variation in height within the measured corneal surface and some reference surface. The most common reference is a sphere, referred to as “best-fit sphere” (BFS). Other shapes include the "best-fit asphere (BFA) or best-fit toric asphere (BFTA)". The values lying above the reference surface are represented with warmer colors, while cooler colors indicate areas below it.[8] There are several patterns described for topography maps: “island, regular ridge, irregular ridge, incomplete ridge, and unclassified”.[13] Jafarinasab et al. studied the sensitivity and specificity of the anterior and posterior corneal elevation by Orbscan II topography (Bausch and Lomb, Rochester, NY, USA). They determined an optimal cutoff point for the posterior elevation of 51 µm for keratoconus and 35 µm for subclinical keratoconus. While for the anterior elevation the optimal cutoff points were 19 µm for keratoconus and 16 µm for subclinical keratoconus.[14] In Pentacam Scheimpflug corneal tomography, the posterior elevation: normal ≤+17 µm, suspicious +18 µm - + 20 µm and risky >+20 µm. In the anterior map: normal ≤+12 µm, suspicious +13 µm + 15 µm and risky >+15 µm.[15] Recently, the posterior elevation has been determined as an excellent predictor of keratoconus. Most of the studies have reported a sensitivity and specificity of >90%.[10][12] When detecting incipient keratoconus, there is significant variability. De Sanctis et al. detected a sensitivity of 73.3% and specificity of 86.5% for posterior elevation in subclinical keratoconus.[16] Jafarinasab et al. obtained a lower sensitivity of 50.00% and specificity 88.65%.[14] 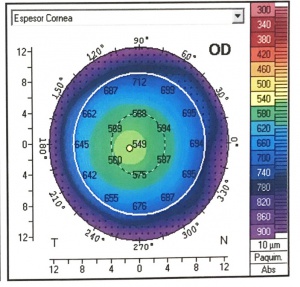 The pachymetric map can useful in detecting incipient keratoconus. The diagnostic criteria are a central corneal thickness (CCT) less than 500 mm, in addition to topographic asymmetry. Also, a study has shown a high probability (97.5%) of corneal ectasia when there is a difference between the central and minimum thickness of more than 27 mm.[17]

Although the pachymetric parameters can accurately detect keratoconus, there is variability in the cutoff points between different studies according to the sample or the device used. Therefore, we should not use this parameter alone to detect keratoconus. When detecting subclinical keratoconus, sensitivities, and specificities of less than 70% have been reported in all studies.[6]

Pachymetric measurements assessed with OCT are similar to those obtained with Scheimpflug systems.[18]The Optical coherence tomography can determine the difference between the thickness of the upper and lower area of the cornea. Also, it shows the vertical location of the thinnest point of the cornea. Studies have shown a high precision in detecting keratoconus.[6]

Reinstein et al. determined the total corneal thickness, as well as the epithelial and stromal thickness in patients with keratoconus. They found that there was a localized central thinning surrounded by an annulus of thick epithelium (epithelial doughnut pattern). The position of the thinnest point in the epithelium was displaced 0.48 ± 66 mm temporally and 0.32 ± 0.67 mm, and by 0.31 ± 0.45 mm and 0.45 ± 0.37 mm inferiorly in the stroma.[19]

The next indices are used to distinguish normal corneas from those with a pathology (keratoconus or forme fruste keratoconus) and are based on the pachymetry, anterior corneal curvature, and elevation patterns.[8]

The SRAX index has an accuracy of 99.6% in detecting keratoconus. The KISA % index varies from 60% to 100% in subclinical keratoconus.[21]

In 2008, Randleman et al. studied the epidemiologic features of ectasia after refractive surgery. There were included 171 ectasia cases. They evaluated the preoperative characteristics, including: “age, gender, spherical equivalent refraction, pachymetry, and topographic patterns, type of surgery performed, flap thickness, ablation depth, and residual stromal bed (RSB) thickness”; and postoperative features: time elapsed since the appearance of ectasia. They created a “risk factor stratification scale”, considering each characteristic. This is an important method to assess risk of ectasia after LASIK.[22]

They concluded that PTA values below 40.0% correlate with the low incidence of ectasia. This formula is a precise method for assessing ectasia risk, and it is more sensitive than the individual components that comprise it.[23]

They described a new index for the assessment of keratoconus. Three criteria were considered:

This is a comprehensive refractive surgical screening tool developed by Belin and Ambrosio. It combines elevation and pachymetry based corneal evaluation in an all inclusive display and allows for quick and effective screening of ectatic disease.

The criteria used for identification of ectasia are standard deviation of: 1. Mean pachymetric progression (dp); 2. mean changes in back elevation (db); 3. Mean changes in front elevation (df); 4. Mean thinnest point thickness (dt); and 5. Mean thinnest point displacement (dy). The final "D" score is based on the previous mentioned 5 parameters . For each criteria, <1.6 is considered normal and colored white; between 1.6 and 2.6 is considered suspicious for keratoconus and colored yellow and if >2.6, indicates development of keratoconus and is colored red.[25]

Corneal topography is an essential tool to perform the preoperative assessment in refractive surgery.[5] It is important to diagnose a variety of corneal abnormalities that can lead to poor outcomes with LASIK, such as keratoconus, forme fruste keratoconus, and pellucid marginal degeneration.[26] Also, we need to determine the presence of astigmatism and refractive stability. It is especially relevant to screen patients carefully and to diagnose those who have an elevated risk for ectasia. Some artifacts can be confused with keratoconus: "Displaced apex syndrome, CL-induced warpage, a prominent tear meniscus, misalignment when obtaining the topography, dry eye disease with poor precorneal tear film and accidental external pressure on the globe".[5]

In LASIK, PRK, SMILE and LASEK, it is relevant to assess the refractive error and corneal topography and determine whether it will lead to an abnormally steep or flat corneal curvature. The risk for buttonholes is bigger for steep corneas, whereas the risk for free caps is higher for flatter corneas. These complications are reported mainly with the use of mechanical microkeratomes; on the other hand, femtosecond LASIK flaps do not seem to have these complications.[26] Postoperative corneal topography is helpful in determining the ablation bed, the quality of the surgery and the uniformity of laser. The study should be performed at least one week after surgery. It is also useful for detecting ectasia and evaluating progression. "Corneal topography-guided custom ablation patterns" is a helpful technique to prevent undesirable postoperative results.[5] 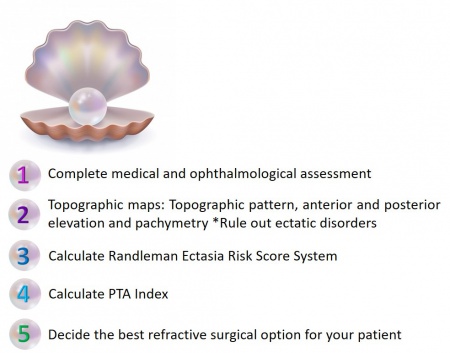