Monocular Elevation Deficiency (MED) is the limitation of elevation of the affected eye from any position of gaze with normal ductions in all other gazes. MED is a frequent cause of hypotropia and can be associated with ptosis/pseudoptosis. Superior rectus palsy, inferior rectus restriction and supranuclear lesions have been found to be contributory to MED.

MED can be congenital or acquired . Congenital cases of MED occur sporadically.[1]

MED has been classified into three types by Ziffer et al. [4]

In Type 2 MED, cases of primary SR palsy are included. FDT is free and upward saccades are slow both below and above midline. Bell’s phenomenon is usually absent.

Type 3 MED is supranuclear type and is usually congenital. It is characterized by intact or mildly reduced vertical saccadic velocity below midline but abnormal or absent velocity above midline and FDT is free.

Efferent tracts for upgaze leave the rostral interstitial nucleus of the medial longitudinal fasciculus (riMLF), cross the midline in the posterior commissure, course through the pretectum and enter the superior rectus (SR) subnucleus of the oculomotor nucleus, leaving the subnucleus, upgaze fibres to the SR immediately cross the midline again. As a result of double decussation of upgaze fibers, the SR receives innervation from ipsilateral riMLF as well as contralateral pretectum and SR subnucleus. In cases of MED, it is presumed that supranuclear input from riMLF into third cranial nerve nucleus is interrupted. Supranuclear deficiency affects upgaze, therefore causes monocular elevation deficiency.

A patient of Monocular Elevation Deficit showing ptosis and hypotropia 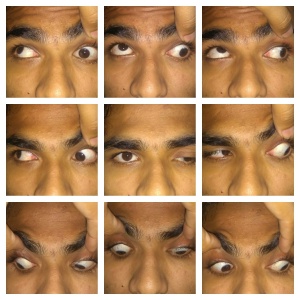 Figure 2: Showing pseudoptosis in a patient with Monocular Elvation Deficit, note that ptosis improves on fixing with the affected eye

Forced duction test is a clinical test which should be done pre-operatively to reveal any restriction. The test is typically performed under topical anaesthesia, conjunctiva is held at limbus with Pierce Hoskin forceps or globe holding forceps, and patient is asked to look in opposite direction of testing muscle to relax the concerned muscle. A positive Forced Duction Test (FDT) is seen in patients of IR restriction.

Active force generation test is done under topical anaesthesia by asking the patient to look in the direction of muscle being tested, presence of a tug is suggestive of residual SR action.

Red and green glasses over right and left eyes respectively, dissociate the two images and would be seen double. Test can be done both for distance and near, with the help of illuminated slit target. The slit is used vertically for charting horizontal deviations and horizontally for charting vertical deviations. The seperation between two images is recorded and is useful in diagnosis and follow-up.

Hess Screen and Lees Screen is used to document relative incomitance and underactions and is based on haploscopic principle. Two test objects are shown to the patient which is seen as one localisation.

Hess Screen consist of a three and a half feet black cloth marked with a series of red lines forming a square of 5 degree each. From the central zero point three squares 15 degree marks the inner square and outer square has excursion of 30 degree. The outer square is used for mild incomitances not detected on inner square charting. Patient wears a red green glass, with red glass in front of right eye and green glass in front of left eye, patient is given a green pointer which he aligns on the red dots and the observer records the points. 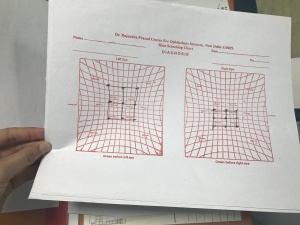 Lees Screen is also similar but does not require red green glass instead uses a mirror septa to cause dissociation of two eye.

Management of MED includes both non-surgical and surgical components.

The correction of underlying refractive error is to be done and amblyopia therapy is given if needed, followed by surgery whenever indicated. 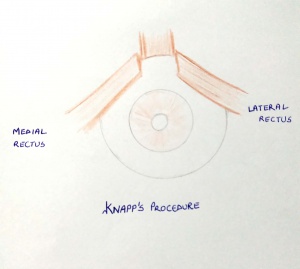 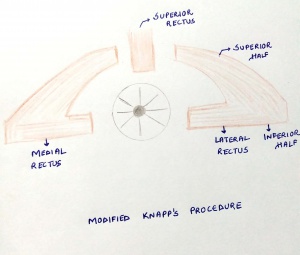 Indications for surgery include

The goal of surgery is to improve the position of the affected eye in primary gaze and to increase binocular field of vision.

In patients with negative forced duction test but a positive active force generation test, superior rectus resection can be done.

Knapp’s procedure is commonly practiced and is now a well-established treatment for monocular elevation deficiency. In the Knapp’s procedure, the tendons of the medial and lateral rectus muscles are transposed to the insertion of the superior rectus muscle. Knapp’s in his work studied 15 patients over a period of eight years. The procedure showed marked variability correcting 21-55 PD (average 38 PD) hypotropia.

Following the surgical correction of hypotropia, and improvement in Bell’s phenomenon, associated ptosis and/or Marcus Gunn phenomenon be addressed.

No split no tenotomy technique by Nishida et al has originally been described for abducen nerve palsy, the procedure has been found to be useful in the management of monocular elevation deficit by Murthy et al and can help in correction of upto 30 pd of vertical deviation with low risk of anterior segment ischemia.

As there are wide variety of causes of acquired MED, thorough investigations (general, ophthalmologic, neurologic, neuro-ophthalmologic and orthoptic (ocular motility work up) should be undertaken, and management varies according to the underlying cause.

Ptosis can lead to refractive error and amblyopia, also if ptosis surgery is done before the strabismus surgery it can lead to exposure keratopathy as most of the patients have poor Bell's phenomenon.

Surgical complications seen commonly in a case of monocular elevation deficit include: 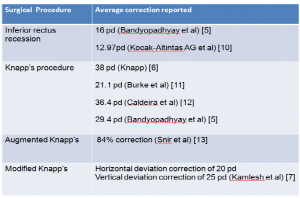 The average correction resulting from various surgical procedures vary, and has been summarised in Table 1.