A saccade is a rapid, conjugate, eye movement that shifts the center of gaze from one part of the visual field to another. Saccades are mainly used for orienting gaze towards an object of interest[2]. Saccades may be horizontal, vertical, or oblique[3]. They can be both voluntarily executed at will (e.g., skimming a text) or involuntary and reflexive (e.g., during the fast phase of nystagmus or rapid eye movement sleep)[4]. Saccades are rapid (up to 700°/s) movements of the eyes that allow for brisk eye movement toward visual, auditory, or tactile stimuli and the identification of points in our surroundings to execute desired tasks[2]. The initiation of a saccade takes about 200 milliseconds[4]. Saccades are said to be ballistic because the movements are predetermined at initiation, and the saccade generating system cannot respond to subsequent changes in the position of the target after saccade initiation[4].

Most animals with good vision show a pattern of stable fixations interspersed between fast saccades that shift the direction of gaze[5]. There is an anatomic rationale behind saccades that explains why humans cannot obtain a clear image of the entire visual field by fixating their eyes at a single point. In humans, the central portion of the retina—which can be considered the central 10 degrees of visual angle—has evolved to allow for visualization of fine spatial detail and color[6]. The fovea centralis, a depression in the surface of the retina at 0 degrees eccentricity (the center of vision), is approximately 1.0 mm in diameter and 3 degrees of visual angle. This small area contains the highest density of cone photoreceptors. Saccades therefore allow for rapid shifts in the gaze so that the central retina—the area of vision that allows for fine spatial details and colors—can assess the surrounding environment. Keeping gaze still during fixations is useful to avoid blur, which degrades the image and occurs due to the long response time of photoreceptors[5]. 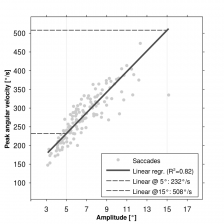 Voluntary, endogenous saccades are self-directed eye movements that can be generated in response to command; they may require a complex volitional process with intricate cortical processing[9]. Reflexive saccades, unlike the complex volitional saccades, are movements of the eyes towards a visual or auditory stimulus[9]. Visually-guided saccades are elicited by the onset of a peripheral stimulus, and can be voluntary or reflexive[9]. Visually-guided saccades often do not require a complex volitional process[9]. The saccade tasks listed below can be useful during neuropsychological research.

Prosaccades involve the simple redirection of gaze to a stimulus and typically are generated to align the fovea with visual targets of interest. These are visually-guided saccades that do not involve complex volitional processes[9].

Express saccades are very short latency reflex-like eye movements that are mediated by direct pathways from the retina or visual cortex to the superior colliculus[9]. These saccades bypass the more time-consuming, extensive processing from the frontal cortex[10], and can be produced under laboratory circumstances. They occur when a “gap” is inserted between the extinction of a fixation point and the appearance of a peripheral stimulus[9].

Predictive saccades occur when gaze is fixated on a target moving in a temporally or spatially predictive manner (such as when following a fast-moving object with one’s eyes)[9].

Antisaccades are eye movements that are an intentional shift of gaze away from a visual stimulus[11]. Implementation of an antisaccade requires the top-down inhibition of a reflexive saccade to the target location, as well as the execution of a voluntary eye movement to the mirror location of the target[11]. Directional errors can therefore be linked to frontal lobe dysfunctions[11].

Saccade sequencing occurs when subjects generate saccades to memorized targets in a learned order[9]. Errors may be linked to supplementary eye fields, which are important for motor sequence learning, or to the frontal eye fields, posterior parietal cortex, or the anterior cingulate cortex.

Microsaccades are saccades that range from about 0.01°–0.3° in amplitude and are unconsciously generated during fixation[12]. They appear to correct for fixation errors from slow eye drifts and may prevent fading of the visual scene, which can occur when the image is stabilized on the retina. Microsaccades are suppressed during tasks requiring fine visual discrimination. 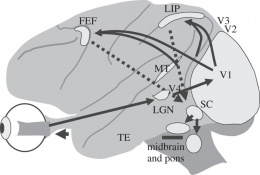 For visually guided saccades, visual information from the retina passes through the optic nerves, chiasm, and tracts to the lateral geniculate nucleus of the thalamus, where it is brought to the primary visual cortex by the optic radiations[9]. At the primary visual cortex, the visual stimulus is registered within 100-120 ms after its presentation[9]. Information is then sent from the primary visual cortex to the extrastriate cortical regions, which are involved in mapping relevant stimuli in visual space[9]. The visual cortex also sends inputs to the superior colliculus, which in turn can initiate a saccade by activating the horizontal and vertical brainstem gaze centers[13]. Areas of the frontal cortex, such as the frontal eye fields and supplementary eye fields, also have direct access to brainstem saccade-generating circuitry and are involved in motor control during saccades[9].

Saccade generation is a complex process that involves multiple other brain regions. Position data travels from the visual cortex to parietal cortex regions such as the superior parietal lobe and the parietal eye fields[9]. These parietal regions also have direct connections to the superior colliculus, which suggest a role in saccade triggering. Damage to the parietal cortex increases the latency of prosaccades, or saccades toward a visual stimulus. The striatum, part of the basal ganglia, has also been found to play a role in reflex saccade generation and inhibition. The cerebellum, particularly the vermis and fastigial nucleus, has been implicated in saccade accuracy. Volitional saccades require the recruitment of additional neural regions such as the prefrontal and anterior cingulate cortices.

After activation, the horizontal gaze center, or PPRF, projects to the abducens nucleus on the same side of the brain[10]. The abducens nucleus has two types of neurons: a lower motor neuron that directly innervates the lateral rectus muscle on the same side, and internuclear neurons that send their fibers across the midline and join a fiber tract called the medial longitudinal fasciculus (MLF)[13]. The purpose of the MLF is to coordinate eye movements during horizontal gaze. The neurons from the MLF then terminate in the portion of the oculomotor nucleus that contains lower motor neurons innervating the medial rectus muscle. Therefore, a saccade initiated in the left frontal eye field will activate the left superior colliculus, which will cause downstream activation of the right abducens nucleus and left oculomotor nucleus, allowing horizontal movements of both eyes to the right.

The frontal eye field also projects directly to the contralateral PPRF[10]. The frontal eye fields and superior colliculus are thought to complement each other, so that damage to one structure will still allow for the production of horizontal saccades. Damage to both structures, however, produces a dramatic deficit in the ability to form saccades.

Simplified pathway of neurons in a voluntary horizontal saccade[13]:

The vertical gaze center, or rostral interstitial nucleus, sends its axons bilaterally to the trochlear and oculomotor nuclei[13]. The trochlear nuclei then activates the superior oblique muscles, and the oculomotor nuclei control the inferior oblique, inferior rectus, and superior rectus muscles. The vertical gaze center ensures that superior and inferior extraocular muscles act synergistically to produce conjugate movements of the eyes.

Simplified pathway of neurons in a voluntary vertical saccade[13]:

The superior colliculus and frontal eye fields are thought to initiate saccades since activation of particular sites in these locations produces eye movements in a specified direction and distance that is independent of the initial position of the eyes in the orbit[10].

Lower motor neurons in the oculomotor, abducens, and trochlear nuclei fire during a saccade, and the duration of neuronal activity corresponds to the amplitude of a saccadic eye movement. With each saccade, these neurons reach a new baseline level of discharge that is correlated with the position of the eye in the orbit[10]. This steady baseline firing holds the eye in its new position.

Horizontal and vertical saccades should be examined independently, as separate disorders can affect each type of saccade. Termsarasab et al. provided a useful framework to examine the individual components of saccades[14]:

There are a number of drugs, lesions, and disorders that can impair saccadic eye movements.

Huntington disease: The main ocular finding is impairment of saccade initiation. oculomotor findings are an early diagnostic clue. Patients can also have saccadic slowing and an impairment in the antisaccade task[14][15].

Spinocerebellar ataxia: Saccades are important diagnostic clues in certain types of SCA, as slowing of saccades on horizontal gaze is a hallmark clinical feature of SCA2[14]. Macrosaccadic oscillations are seen in spinocerebellar ataxia with saccadic intrusions (SCASI)[14].

ADHD: Studies have shown a consistent reduction in ability to suppress unwanted saccades, suggesting an impaired functioning of areas like the dorsolateral prefrontal cortex[11].

Autism: An elevated number of antisaccade errors has been consistently reported, which may be due to disturbances in frontal cortical areas[11].

Childhood-onset schizophrenia: There is an increased number of anticipatory saccades and intrusive saccades during smooth pursuit eye movements[11].

Alzheimer’s disease: Some studies have shown patients can have hypometric saccades, prolonged saccade latencies, reduced peak velocities, and an impairment in the antisaccade task[15].

The high accuracy of saccades in normal patients is a result of continuous adaptation[16]. Saccade adaptation involves evaluating the accuracy of past saccades and subsequently correcting the motor commands for the next saccades. Saccades are ballistic, and therefore cannot be corrected while in flight[4], so an adaptive process is necessary to provide a greater degree of accuracy. Additionally, development and aging causes change in numerous components of the oculomotor system, such as the eye muscles, cranial nerves, and central pathways. Saccade adaptation is unconscious and improves over repeated trials. This process is useful to correct saccade inaccuracies over time. 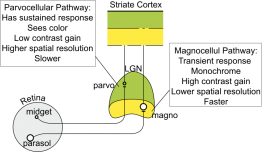 Visual information during saccades is considered to be “masked”, or hidden from our perception[17]. Saccadic masking, or “saccadic omission”, explains why we do not perceive a smeared out image or disturbing sense of motion during each saccade[17][18]. This phenomenon is due to an entirely visual process and involves suppression of the magnocellular pathway[18], which is involved in carrying information about motion at high velocities. Suppression of this pathway results in a greatly diminished sensitivity for motion during saccades.