Miller Fisher syndrome (MFS), also known as Fisher syndrome and the Miller Fisher Variant of Guillain-Barré syndrome, is an autoimmune, antibody mediated neurologic disorder. MFS typically presents as a monophasic, self-resolving triad of ophthalmoplegia, ataxia, and areflexia. MFS is closely related to other diseases such as Guillain-Barré syndrome, Bickerstaff brainstem encephalopathy, and acute ophthalmoparesis, collectively known as the anti-GQ1b syndromes.

MFS is an autoimmune-mediated peripheral neuropathy associated with anti-GQ1b neuronal antibodies (in up to 80% of cases).[1][2] As with Guillain-Barré syndrome, MFS can develop after infection by various pathogens. One study found that 21% of MFS cases were likely caused by Campylobacter jejuni and 8% by Haemophilus influenzae. An additional 67% of cases did not have serological evidence of five tested pathogens, though most had a recent history of upper respiratory infection symptoms.[2] Other pathogens associated with MFS include Aspergillus[3], Coxiella burnetti[4], Epstein-Barr virus[5], Helicobacter pylori[6], group A streptococcus[7], Pasteurella multocida[8], and varicella zoster.[9]

Genetic studies on C. jejuni have implicated certain genes involved in the organism’s pathogenicity. The cst-II gene has been found to be crucial to the synthesis of ganglioside-like lipo-oligosaccharides (LOSs) that are associated with GBS and MFS. Different alleles of the gene have been associated with different clinical presentations. Patients infected by C. jejuni with the Thr51 polymorphism more often had anti-GM1 and anti-GD1a IgG antibodies with associated limb weakness. Patients with C. jejuni (Asn51), on the other hand, more often had anti-GQ1b IgG antibodies with ophthalmoparesis and ataxia.[10]

Though MFS is typically associated with infectious etiologies, other potential associations have also been reported:

During the COVID-19 pandemic, several studies and cases have reported COVID-19-associated MFS.[11]

Further, MFS makes up much larger proportion of GBS patients in the Far East than in the West.[13]

Given the generally limited, self-resolving course of most MFS cases, few pathological studies of the disease exist. Of the studies performed, several have found peripheral demyelinating neuropathy, particularly of the cranial nerves. Evidence of central nervous system pathology has been limited, though three autopsied patients have shown inflammatory brainstem lesions.[14]

The primary mechanism of MFS involves autoimmune-mediated peripheral neuropathy after exposure to a pathogen capable of molecular mimicry. Anti-GQ1b is the principal antibody implicated in the pathophysiology of MFS. GQ1b is a ganglioside – a class of lipids consisting of one or more sialic acid residues attached to the carbohydrate moiety of a glycosphingolipid.[15] GQ1b is abundant in the plasma membranes of the cranial nerves supplying the extraocular muscles, as well as presynaptic neuromuscular junctions. [14] Anti-GQ1b levels in the serum have shown to correlate strongly with disease course, particularly with ophthalmoplegia.[16] Other anti-glycoside antibodies, such as antiGT1a, anti-LM1, anti-GD3, anti-GM1, and anti–GalNacAc-GD1a, have also been implicated in the disease, with different antibodies correlating with different symptoms.[13][14] 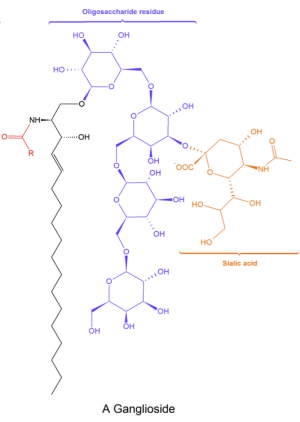 Anti-GQ1b antibodies have been found in over 80% of patients with MFS and are typically absent in control patients.[2][22] These antibodies localize in the extramedullary paranodal regions of cranial nerves III, IV, and VI, where they may interfere with axonal signal transmission.[23] GQ1b may also be present in ciliary ganglia, leading to pupillary sphincter and ciliary muscle dysfunction, also called internal ophthalmoplegia.[24] Anti-GQ1b may also affect the neuromuscular junction (NMJ), leading to the motor effects seen in MFS. When anti-GQ1b binds to the NMJ, it induces a massive quantal release of acetylcholine in a complement-dependent process that eventually blocks neuromuscular transmission.[25] Electrophysiology studies corroborate neuromuscular junction impairment.[13] Complement-mediated axon terminal and perisynaptic Schwann cell destruction has also been reported.[26][27] Ultimately, however, controversy remains around which of these mechanisms are the primary cause of peripheral motor nerve dysfunction in MFS.

Ataxia in MFS may be due to peripheral and/or central pathology. Deficits in muscle fiber spindle afferents have been discovered in patients with MFS that correlate with ataxia severity.[28] Postural body sway analysis has also found proprioception deficits in MFS patients.[29] Still, other studies have found anti-cerebellar antibodies in the sera of MFS patients, indicating a possible cerebellar etiology.[30][31]

Anti-GQ1b can also cross-react with other gangliosides. Further, when GQ1b forms complexes with other gangliosides, it becomes more reactive with some anti-GQ1b antibodies (complex enhanced antibodies) while becoming less reactive with others (complex attenuated antibodies). Similar complex-related specificity has been found with anti-GT1a antibodies. Fukami et al. have shown that the complex specificity of these two antibodies correlates significantly with different clinical presentations.[32] If expression of ganglioside complexes varies by anatomic location, complex-specificity may partly explain how anti-ganglioside antibodies can have different clinical manifestations.

Classically, MFS has a monophasic course and classically manifests as a triad of ophthalmoplegia, ataxia, and areflexia. In practice, however, there is variability in clinical presentation, and significant overlap exists among the anti-GQB1 syndromes (e.g. MFS, Guillain-Barré syndrome, and Bickerstaff’s brainstem encephalitis).[24] Frequently, MFS is preceded by upper respiratory infection symptoms (76%), or, less often, gastrointestinal symptoms (25%). After the onset of infection, it takes a median of 8 days for neurological symptoms to develop. Then, 12-15 days later, recovery typically begins.[12]

Ataxia is the second component of the clinical triad for MFS. The severity of the ataxia can be variable, but as many as 30% of patients have ataxia so debilitating that they are unable to ambulate independently.[12] Areflexia is the final component of the triad. Deep tendon areflexia is found in most, but not all, patients with MFS. Studies have found that between 12% to 31% of MFS patients have intact reflexes.[24] Some patients with MFS exhibit signs such as limb weakness that suggest an overlapping pathology with Guillain-Barré syndrome.[34]

The diagnosis of MFS is primarily clinical after exclusion of alternative etiologies and is confirmed later by additional laboratory testing.[35]

Neuroimaging is typically normal in MFS. Rarely, nonspecific MRI abnormalities may occur in 1% of patients, including abnormalities in the cerebellum, middle cerebellar peduncle, and midbrain.[2]

CSF studies in MFS typically show albuminocytological dissociation (i.e., high CSF protein with low CSF white blood cell counts). CSF protein levels may correlate with the course of disease.[36] Albuminocytological dissociation, however, is a common finding among neuroimmunological disorders. Similar findings can be found in Guillain-Barré syndrome and Bickerstaff brainstem encephalitis. While a variety of CSF contents have been proposed as specific markers for MFS, none are currently considered to be diagnostic of the disease.[13]

While not necessary to make a diagnosis of MFS, testing for anti-GQ1b antibodies can aid physicians in narrowing down a differential diagnosis. In the first three weeks of disease, serologic anti-GQ1b antibody testing is superior to CSF studies due to its greater sensitivity.[1] Further, the levels of these antibodies correlate with clinical severity of the disease.[16]

MFS is part of a spectrum of disease termed the “anti-GQ1b antibody syndrome”. Other diseases on this spectrum include Guillain-Barré syndrome, Bickerstaff brainstem encephalitis, and acute ophthalmoparesis without ataxia. These diagnoses should be considered when managing a patient with possible MFS, especially if the presentation is atypical or incomplete. In 2014, the GBS Classification Group proposed diagnostic classifications of these disorders based on clinical features.[35]

A visual representation of their proposed classification of Miller Fisher syndrome can be found in Figure 2. Under their classification, Bickerstaff brainstem encephalitis is a subtype of Miller-Fisher syndrome. This classification parallels other reports that have suggested that the two represent a spectrum of CNS and PNS (peripheral nervous system) involvement of the same disease.[2] 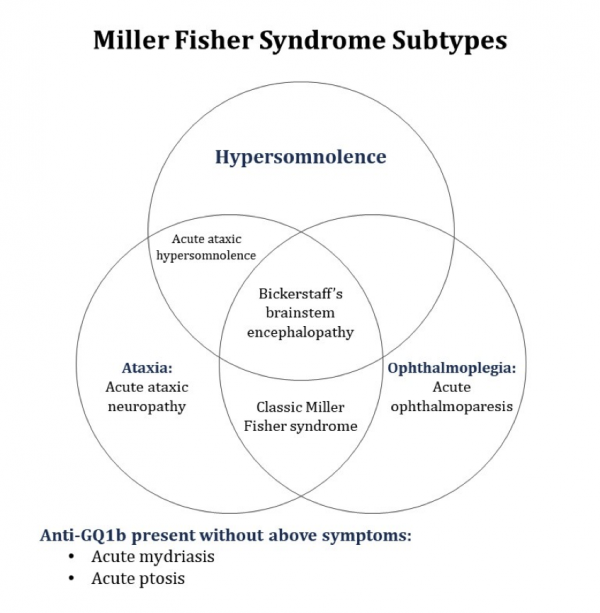 Given the self-resolving course of MFS, supportive care may be sufficient if respiratory function is spared. Medical therapy exists, but has not been proven to be effective. Surgical management is not indicated.

In contrast to GBS, randomized trials of medical therapy for MFS have yet to be conducted. Retrospective research has found that intravenous immunoglobulin (IVIG) does not have a major impact on outcomes, though it does quicken the onset of recovery from ophthalmoplegia by a small margin (12.0 days after symptom onset compared to 13.5 days).[37] IVIG therapy, however, may carry risks. Prior cases of cerebral infarction and encephalopathy have been reported in patients with MFS after initiation of therapy. Plasmapheresis, effective in GBS management, is another potential treatment for MFS. While its use has shown some success in case reports, retrospective studies have not found it to be very beneficial.[14][24][38] Overall, the benefits of medical therapy for MFS are unclear, and it may be unnecessary for good outcomes. Further research in this area is still needed to elucidate whether plasma exchange and IVIG are useful in the treatment of MFS.

Though rare, several potential complications of MFS have been reported, and these may require more aggressive therapy. They include: 28[14]

Generally, MFS is a self-resolving disease with good prognosis. The mean recovery time is about 10 weeks, though residual symptoms can be present in up to a third of patients. Recurrence (3%) and mortality (4%) are rare.[40]