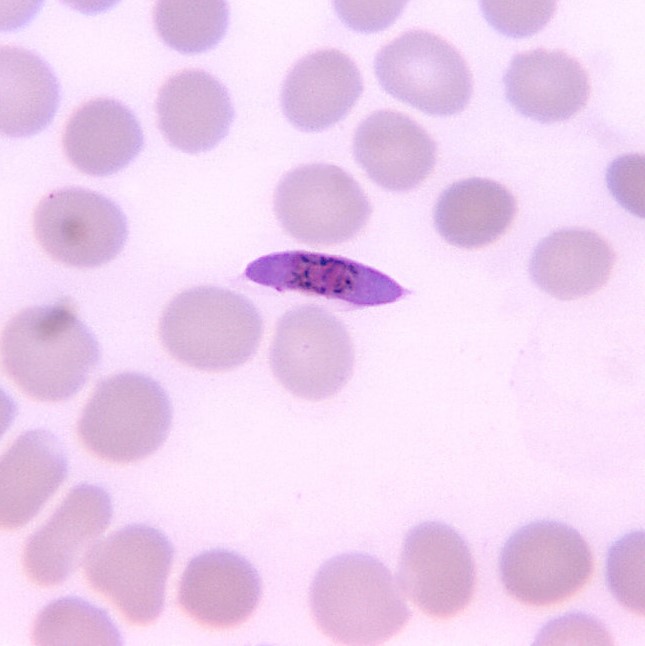 The pathogenesis of malarial retinopathy is associated with that of cerebral malaria, i.e. sequestration of infected red blood cells in retinal and cerebral microvasculature, causing vessel obstruction and reduced blood flow resulting in downstream ischemia and hypoxia.[3] Dysregulation of the angiopoietin-Tie-2 pathway, an important regulator of endothelial cell function and vessel integrity, has been linked with both retinopathy and mortality in pediatric cerebral malaria.[4] New research is showing that increased expression of group A Plasmodium Falciparum erythrocyte membrane protein 1 (PfEMP1) on host erythrocytes due to the parasite is correlated with increased severity of cerebral malaria. [5] [6] Additionally, serum levels of histidine-rich protein 2 (HRP2), a malaria parasite protein currently of unknown significance, can be elevated in patients with malarial retinopathy. [7] [8] Cerebral malaria and malarial retinopathy are most commonly seen in severe infections by Plasmodium falciparum, though patients infected with Plasmodium vivax have also been noted to have some features of malarial retinopathy.[9] A recent study developed a retinal model in mice to further study cerebral malaria – specifically, they found that malaria parasites cross the blood-retinal barrier and infiltrate the neuroretina potentially through Müller glial cells.[10] 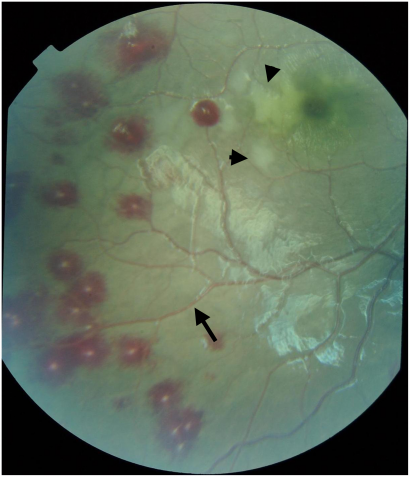 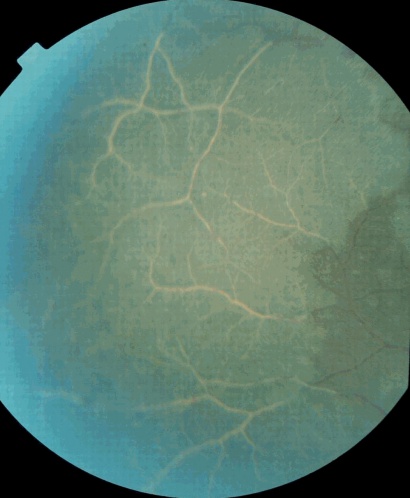 Retinal whitening may be seen in the macula (sparing the foveola), though some patients may only develop retinal whitening in the periphery. Hence, indirect ophthalmoscopy through a dilated pupil is important for establishing the diagnosis. While some patients with malaria have been noted to have cotton-wool spots, the whitening typical of malarial retinopathy tends to be less vivid, more widely distributed, and may be poorly demarcated.[3] Fluorescein angiography studies have demonstrated that this whitening corresponds to retinal non-perfusion.[11] Patients with cerebral malaria commonly develop thrombi composed of fibrin and platelets, and it is thought that thrombosis of retinal microvasculature induces ischemia and subsequent hypoxia, leading to intra-cellular edema and loss of retinal transparency.[12]

Retinal vessels may be noted to be orange or white, particularly in the retinal periphery; and tramlining may be seen in larger vessels. Discoloration may be noted in discrete sections of vessels or in a branching pattern.[3] To date, this finding has only been described in the pediatric population.[13] The discoloration is likely related to drastically reduced hemoglobin levels in parasitized red blood cells that tend to sequester in retinal capillaries and in branch points of the peripheral retinal vasculature.[14]

Intra-retinal hemorrhages, often with a white center and resembling Roth spots, are a common finding in patients infected with malaria. While patients with asymptomatic or mild infections may have no or few hemorrhages, patients with severe malaria may manifest hemorrhages that are too numerous to count. Hemorrhages may sometimes involve all layers of the retina, extending into both the pre-retinal and sub-retinal space.[12] Research has shown that the number of retinal hemorrhages correlates with cerebral hemorrhages at postmortem examination. [15]

Optic disc edema can be seen in various etiologies of coma, including cerebral malaria. While this sign is not specific to malarial retinopathy, its presence in patients with cerebral malaria is a particularly poor prognostic sign.[3] However, clinically defined cerebral malaria that only has papilledema on fundoscopic exam might be a sign of severe illness and may be secondary to a co-existing infection or pathology. [16]

OCT can provide significant information to confirm the diagnosis of MR, though access to Ocular Coherence Tomography (OCT) in regions where malaria is endemic can be limited. One study found that 90-93% of eyes affected by malarial retinopathy had findings of ‘hyper-reflective capillaries or vessels’ on OCT, which the authors postulate to represent endothelial sequestration of pRBCs, specifically due to hemozoin, a metabolic by-product of the falciparum parasite.[18] Additionally, this hyper-reflectivity disappears within 48 hours of starting treatment in all patients.

Diagnosing coma caused by cerebral malaria versus other causes of encephalopathy is a challenge in resource-poor areas, and misdiagnosis can have life-threatening consequences[19].  For example, a prospective autopsy study in Malawi found that 23% of children who died with the diagnosis of cerebral malaria actually did not have the histopathological hallmarks of cerebral malaria, but had other causes of death[20].  Misdiagnosis occurs because the clinical manifestations of severe malaria in children (coma, seizures, hypertonia, hyperventilation, and anemia) are not specific to malaria.  When children present with these symptoms, along with malaria parasites in the peripheral blood, a presumptive diagnosis of cerebral malaria is often made, yet the parasitemia may be an incidental finding in endemic regions.  In much of these same regions, laboratory and radiographic investigations to narrow the differential are typically not available.

The unique retinal findings in cerebral malaria correlate to the histopathology and severity of the disease[21][14]. These are the most specific and sensitive signs of cerebral malaria that are available[20]. One study showed that the detection of malarial retinopathy in comatose children with malarial parasitemia had a positive predictive value of 95% and a negative predictive value of 90% for the diagnosis of cerebral malaria, compared to a positive predictive value of only 77% in patients diagnosed clinically, using World Health Organization criteria, without a dilated funduscopic exam[20][22]. Current research focuses on the utility of non-ophthalmologists to directly examine and/or capture retinal images for automated and expert review[23][22]. New research is also working to determine serum biomarkers since even access to indirect ophthalmoscopes in these settings can be scarce. Specifically, circulating levels of endothelial activation markers such as ICAM-1, vWF, Ang-2 and sTie-2 have been associated with malarial retinopathy. [24] As mentioned before, access and education around these new developments, as well as to equipment, supplies, and training, remain a challenge.

The majority of children with cerebral malaria regain consciousness within 48 hours without any permanent neurological sequalae, while approximately 10% will develop lasting neurological deficits and about 20% will die from the illness.[25] One study found that children with retinopathy-positive cerebral malaria (RP CM) were more likely to have deficits in language development than those with retinopathy-negative cerebral malaria (RN CM). [26] The Blantyre Malaria Project Epilepsy Study found that RP CM is a risk factor for adverse neurologic outcomes like epilepsy, disruptive behavioral disorders, and other neurodisabilities. [27] The severity of malarial retinopathy in these children is correlated with longevity of coma and increased risk of death, with the presence of optic disc edema and peripheral retinal whitening conferring the highest relative risk.[2][21] Studies in adults infected with Plasmodium falciparum found that mild retinopathy may be present in adults with uncomplicated malaria, but that more severe malarial retinopathy was associated with more severe systemic disease.[13] More specifically, one study found that children with RP CM malaria is associated with significantly higher serum CRP, erythropoietin, and ferritin and higher CSF Erythropoietin, EPO, and plasma:albumin ratio when compared to children with RN CM, potentially indicating that a positive finding of retinopathy correlates with more serious systemic disease that presents later. [28]