Lipemia Retinalis is a rare manifestation of hypertriglyceridemia manifested by abnormal appearance of the retinal arteries and veins, and occasionally the entire fundus.

Lipemia retinalis is commonly associated with high triglyceride levels in hyperlipoproteinemias types 1, 3, 4, and 5 with different underlying causes, [2] and chromosome microarray and lipid gene sequencing may demonstrate a homozygous lipoprotein lipase gene coding mutation.  However, genotype–phenotype correlations have not been established, as there is no established association between the nature or location of the mutation, age at diagnosis, lipid levels, and severity of symptoms. [3]

Lipemia retinalis is an ocular finding associated with elevated plasma levels of triglycerides. It serves as a vital clinical sign of hypertriglyceridemia because acute triglyceride elevations may be asymptomatic at first, delaying treatment of a potentially lethal metabolic disorder as elevations of this magnitude may lead to cardiovascular consequences including heart attack or stroke. [4]

The ocular findings result from light scatter induced by the triglyceride-laden chylomicrons in the plasma. [5] Hyperlipidemia without accompanying hypertriglyceridemia does not present this clinical picture. [4]

The early signs of lipemia retinalis occur in the peripheral retina, and as triglyceride levels increase, they spread to the posterior pole. At triglyceride levels of 2500–3499 mg/dL, the peripheral vessels appear creamy and thin; at levels of 3500–5000 mg/dL, the vessels in the posterior pole assume a creamy color; and at levels exceeding 5000 mg/dL, the fundus becomes salmon-colored, with creamy arteries and veins that can be distinguished by caliber only. The clinical appearance is graded accordingly as early, moderate, or marked (Stages I-III, respectively).

Reduction and control of serum triglyceride levels will prevent lipemia retinalis from developing. Correction of the lipid levels may reverse the abnormal findings within one week.Strict adherence to a low-fat diet without breast milk supplementation may be effective in treating infants with severe lipemia retinalis associated with very high serum triglyceride levels. [6]

Lipemia retinalis is diagnosed based upon its clinical appearance on dilated fundoscopic exam and coexistent hypertriglyceridemia.

There may be a family history of lipid abnormalities. Hypertriglyceridemia occurs as a primary familial disorder or secondary to other diseases. The familial disorders include ApoC-II deficiency, endogenous circulating LPL inhibitor, and LPL deficiency. [7]

The physical exam on a patient with lipemia retinalis includes vital signs, cardiovascular exam, integumentary exam and dilated fundoscopy. Vital signs should focus on artherosclerotic changes. The cardiovascular exam should include heart sounds, carotid or renal bruits, and peripheral pulses. Skin exam should look for eruptive xanthomas. Ocular exam may reveal corneal arcus and dilated fundoscopic exam is necessary for the diagnosis and staging of lipemia retinalis.

Signs of lipemia retinalis include peripheral vessels that appear creamy and thin; later in the disease, the vessels in the posterior pole assume a creamy color; and in the most advanced stage, the fundus becomes salmon-colored, with creamy arteries and veins.

Lipemia retinalis is typically asymptomatic and generally does not affect visual acuity unless it is associated with vascular occlusion and/ or retinal ischemia. The diagnosis of lipemia retinalis is made based on ophthalmoscopic examination demonstrating the appearance of pink to milky white retinal veins and arteries. Chronic hypertriglyceridemia may cause patients to complain of recurrent abdominal pain in the setting of recurrent or acute pancreatitis. [4] Markedly elevated triglycerides in lipemia retinalis might predispose patients to develop potential ocular complications including loss of vision caused by inner retinal ischemia or the development of retina vein occlusion.[5]

Lipemia retinalis generally does not affect visual acuity unless it is associated with vascular occlusion and/ or retinal ischemia. The diagnosis of lipemia retinalis is made based on clinical examination demonstrating the appearance of pink to milky white retinal veins and arteries. 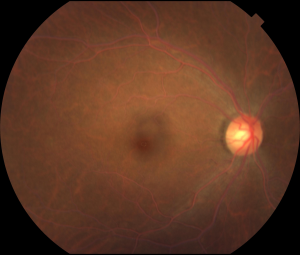 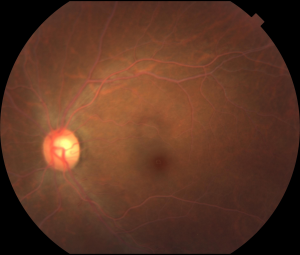 Figures: Right and left eyes of a 43-year-old asymptomatic woman who was referred by an optometrist for abnormal-appearing blood vessels.  Visual acuity and examination were normal except for the retinal vessels seen on dilated exam. Note the creamy ‘cake batter’ appearance of the retinal arteries and veins bilaterally. Subsequent serum lab testing revealed an elevated total cholesterol with a triglyceride level >3500 mg/ dl. She was started on oral fenofibrate and niacin which normalized her triglyceride level within 6 weeks. Subsequent dilated exam at that time by the referring optometrist showed a normal fundus appearance (photo unavailable).  Photo courtesy of Daniel F. Kiernan, MD, FACS and Barbara McGinley, CRA, COT.

Fluorescein and indocyanine angiography testing is typically unremarkable. Spectral-domain optical coherence tomography is useful in demonstrating inner retinal changes associated with lipemia retinalis at the histopathological level. Testing may demonstrate hyperreflective and engorged retinal vessels and white dots in the inner nuclear and ganglion cell layer which may slowly disipate over several months after serum triglyceride levels are normalized. This is notably more gradual than the gross appearance of the retinal blood vessel appearance which typically normalizes within 5 days after lipid levels are lowered.  A case report described the hyperreflective appearance of the retinal vessels in OCT reversing five days after the treatment, whereas the hyperreflective dots seen on OCT disappeared over 3 months.[8] OCT-angiography findings have not yet been reported. Testing with electroretinography may show decreased a- and b-wave amplitudes in both cone and rod responses. [9]

A fasting lipid profile as a genral medical examination should be sought in a patient found to have lipemia retinalis.Hypertriglyceridemia occurs as a primary familial disorder or secondary to other diseases. The familial disorders include ApoC-II deficiency, endogenous circulating LPL inhibitor, and LPL deficiency. [7]

Lipemia retinalis is an important ocular sign of a life-threatening but easily treatable metabolic disorder. Therefore, the treatment is to reduce the serum triglyceride levels to below 500 mg/dl. This can be accomplished by a number of medical treatments for lowering triglyceride and cholesterol. The patient should be followed by his primary medical doctor to treat the hyperlipidemia.

Three classes of medications are appropriate for the management of major triglyceride elevations: fibric acid derivatives, niacin, and omega-3 fatty acids. High doses of a strong statin (simvastatin, atorvastatin, rosuvastatin) also lower triglycerides, by as much as approximately 50%. Four fibrates are used in clinical practice: gemfibrozil and fenofibrate are available in the United States; bezafibrate and ciprofibrate are available in Europe and other countries. [10]

Once triglyceride levels return to normal, the clinical ocular findings of lipemia retinalis should quickly resolve. [4]

Surgery is not specifically indicated for the treatment of lipemia retinalis. However, plasmapheresis can be used in the setting of severe hypertriglyceridemia to reduce triglycerides in the acute setting. Ileal bypass surgery has demonstrated improvement in all lipid parameters but should be reserved for refractory cases. [11] Lipemia retinalis has been reported in association with hypercholesterolemia, skin xanthelasmas and a pulmonary cholesteroloma lung lesion as complications following allogeneic bone marrow transplant for treatment of diffuse mixed T cell lymphoma in a 22-year-old woman. These complications resolved and cholesterol levels following plasmapheresis and hypolipidemic treatment with a statin. [12]

After plasmapheresis therapy, delayed transfusion reactions or infection related to the use of central venous catheter can occur days after the treatment, and patients should seek medical attention if signs and symptoms occur.[13]