Lacrimal sac tumors are rare, but their early recognition and management is imperative as the tumors can be locally invasive and potentially life threatening. Tumors can be benign or malignant, and 55% of lacrimal sac tumors are malignant. Mortality rates for malignant tumors vary with stage and type, but fatal outcomes are reported in up to a third of patients. Patients present in a number of ways, including with symptoms of secondary acquired nasolacrimal obstruction. [1][2][3][4][5]

Anatomy: Tears are produced by the lacrimal glands; paired almond shaped exocrine glands, which sit in the superolateral orbit within the lacrimal fossa, an area within the frontal bone. The tears lubricate the eye and are then collected into the superior and inferior puncta and then drain into the inferior and superior canaliculi. From the canaliculi, the tearspass through the valve of Rosenmuller into the lacrimal sac, where they then flow down the nasolacrimal duct, the Valve of Hasner, and finally into the nasal cavity via the inferior meatus.[6]

Only about 775 cases have been reported worldwide in the literature from the 1930’s to the present day. Benign tumors tend to present in younger patients, while malignant tumors present more commonly in the fifth decade.[4]

Most patients with lacrimal sac tumors present with signs and symptoms of chronic nasolacrimal duct obstruction - unilateral epiphora and/or a palpable mass in the lacrimal sac area. Blood-stained tears, aka hemolacria, have also been reported. The diagnosis of lacrimal sac tumor is typically made incidentally; unusual tissue is noticed during a dacryocystorhinostomy and so a biopsy is done. Late stage tumors may present with signs of orbital invasion, such as proptosis and nonaxial globe displacement, lymphadenopathy, overlying skin ulceration, and rarely, distant metastasis. [7][8][4]

Lacrimal sac tumors can be divided into epithelial and non-epithelial tumors.

Epithelial tumors: Epithelial tumors account for 60-94% of tumors. The lacrimal sac, like the upper respiratory tract, is lined by a pseudostratified columnar epithelium with cilia and goblet cells.

The workup for a patient with a lacrimal mass and epiphora includes a full history, a complete ophthalmic exam, lacrimal probe and irrigation, and examination of the nose. Given that a mass may not be appreciated during early stages, diagnosis may be difficult to differentiate from chronic dacryocystitis.[4]

Imaging can aid in diagnosis, determining extent of disease, and for surgical preparation. CT of the orbit and sinus is helpful for identifying changes to bone and invasion through bone while MRI provides increased visualization of the soft tissue. Examples of lacrimal sac tumors evident on CT and MRI imaging are included below. CT dacryocystography of the lacrimal system can be used to demonstrate a lacrimal sac filling defect, but does not delineate soft tissue well. Fine needle aspiration biopsy (FNAB) of lacrimal sac tumors is not recommended as interpretation of results are difficult and complications include hemorrhage, infection, and inadequate biopsy. Instead, a direct incisional biopsy is recommended for adequate tissue samples. A careful histopathologic assessment and diagnosis is needed to both confirm tumor type and guide treatment. Once detected, communication with oncology specialists is required to coordinate and assess the necessity of a metastatic workup. [4][7][9] 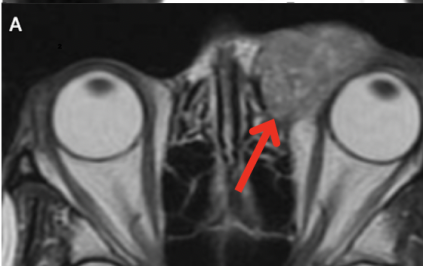 Fig A: Enhanced visualization of soft tissue involvement on MRI of an inverted papilloma of the left lacrimal sac. Image courtesy of Daniel Learned, MD 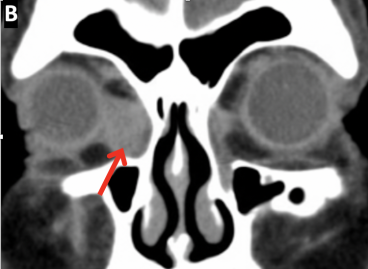 Fig B: Bony changes can be noted on CT of an inverted papilloma of the lacrimal sac. Image courtesy of Paul Langer, MD

The prognosis of lacrimal sac tumors depends on tumor type, malignancy, stage, grade, and the patient’s overall health. However, the overall mortality of malignant lacrimal sac tumors is approximately 38%,  with transitional cell carcinoma and melanoma having the worst prognosis. [4]

Benign epithelial or mesenchymal tumors confined to the lacrimal sac are often treated with a dacryocystectomy. In cases of malignancy, an intact/en bloc tumor excision along with removal of the periosteum surrounding the lacrimal sac and the nasolacrimal duct is recommended, as cancer recurrence is believed to be due to the extension of premalignant lesions along the nasolacrimal duct.  In cases with radiological evidence of tumors, which have spread beyond the lacrimal drainage system, resection of the orbital and nasal walls may be necessary. Postoperative radiation and or chemotherapy is indicated in cases with bony and/or lymphatic invasion, as well as in cases without clear surgical margins, to both aid in tumor clearance and decrease recurrence risk. Recurrent tumors often require additional surgical intervention and, occasionally, palliative radiation therapy.[4][7][18] Patients should be managed by a multidisciplinary team with both short- and long-term monitoring, as recurrence and metastasis can occur years after initial management.[4]