Defined narrowly, interstitial keratitis is any non-ulcerating inflammation of the corneal stroma without the involvement of either the epithelium or endothelium. Practically, however, the term refers to a common endpoint for a number of diseases which primarily manifest as inflammation and vascularization of the corneal stroma with minimal loss of tissue. Diseases that also involve other layers of the cornea secondarily are also included as long as the stroma is the predominant layer affected. The underlying causes of interstitial keratitis can broadly be either infectious or immune-mediated. The stroma constitutes the greatest thickness of all of the layers of the cornea and is made up of specially arranged collagen fibrils that allow clear transmission of light. The inflammation and blood vessel invasion characteristic of interstitial keratitis can result in scarring of this layer resulting in decreased vision. 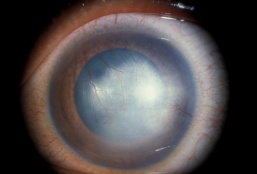 Interstitial keratitis is a non-ulcerating inflammation of the corneal stroma.

The most common etiologies of interstitial keratitis in the United States are Herpes Simplex Virus and Syphilis. Other associated bacterial diseases include Lyme disease, Tuberculosis, Leprosy, Brucellosis, and Leptospirosis. Viral etiologies include the other Herpes viruses including Herpes Zoster and Epstein-Barr, as well as HLTV-1, Mumps, and Measles. Onchocerciasis, Trypanosomiasis, and Microsporidiosis are important considerations in developing countries while Acanthamoeba may be seen more commonly in developed countries. Finally, diseases thought to be immune-mediated in nature including Cogan's syndrome, Sarcoidosis, Mycosis Fungoides, and contact lens-associated keratitis are in the differential diagnosis.

The risk factors for interstitial keratitis vary according to the underlying etiology.

Intralamellar infiltration of lymphocytes with extensive neovascularization in the absence of overlying ulceration. The endothelium is unaffected in the early stages but may experience decompensation later in the course along with concomitant findings of stromal and epithelial edema. Other late findings include ghost vessel formation and corneal scarring.

A thorough and complete eye exam should be performed on any patient suspected of having interstitial keratitis. The general health of the eye should be assessed, and appropriate ancillary tests should be done to assess corneal curvature, astigmatism, and thickness.

Decreased vision highly dependent on the extent and location of involvement. Significant photophobia and pain are highly characteristic.

Interstitial keratitis is a clinical diagnosis based on the finding of non-ulcerative, stromal keratitis.

Ancillary testing should be directed by the history and physical exam. While syphilis is becoming a less common etiology for infectious keratitis, it still represents a significant number of cases and is easily treated, making the inclusion of an RPR/VDRL + FTA-ABS/ MHA-TP or equivalent tests worthwhile. Other bacterial etiologies are rare causes of interstitial keratitis, and testing for them should be based on specific findings either in the history or physical exam. Contact lens-associated keratitis may be either immune-mediated or infectious. Immune-mediated contact lens-associated interstitial keratitis is usually self-limiting. If it does not resolve as expected, confocal microscopy or corneal culture/histology should be considered. Other parasitic infections may be identified through isolation or identification from other bodily fluids. Serologic testing for most viral etiologies is often unhelpful given the widespread exposure of the vast majority of the population to these pathogens. Acute and convalescent titers and other specific tests may have some value if the diagnosis is uncertain or the resolution is delayed.

Cogan's syndrome represents a special indication for audiology testing (50% experience irreversible deafness) with follow-up MRI scans of the inner ear looking for vestibular or cochlear inflammation if indicated. This disorder is most common in young adults and should be suspected if any hearing deficits are noted by history in a patient with mild peripheral interstitial keratitis. Ocular signs usually begin with sectoral conjunctival injection followed by subepithelial, peripheral keratitis. The interstitial keratitis which subsequently develops is described as anterior stromal or superficial. They may also manifest findings of systemic inflammation including Takayasu's arteritis, myalgia, polyarthralgia, and be found in conjunction with other autoimmune diseases. Circulating autoantibodies against both the inner ear and cornea have been identified although the correlation with disease and treatment is variable.

The primary goals in the treatment of interstitial keratitis are to control local inflammation to prevent pain and visually significant scarring and to identify an underlying cause to reduce systemic sequelae of the disease.

For many common forms of interstitial keratitis, corneal inflammation represents primarily an immune response rather than active infection. Therefore, treatment of the corneal manifestations may often occur independently or in parallel to the treatment of its underlying systemic cause. Prominent exceptions are rare forms of interstitial keratitis in infectious diseases as are seen in Lyme disease, mycobacterial infections, certain bacterial pathogens, as well as most parasitic diseases, where definitive therapy of the underlying disease is integral to the safe resolution of the corneal infection.

As an example, Syphilitic interstitial keratitis is a result of congenital syphilis in 90% of cases and usually occurs in the pre-teen or early teen years manifesting in the majority of patients as a bilateral, painful, visually limiting keratitis. If left untreated, photophobia is the most striking symptom often confining the patient to dark environments until its spontaneous resolution months to years. Whether the syphilis is congenital or acquired, treatment of the systemic disease will have little effect on the corneal inflammation but should be vigorously pursued to limit systemic complications.

Corticosteroids have a role in the local therapy of most forms of bacteria-mediated interstitial keratitis, but all will require specific systemic antibiotics to cure the underlying disease. With the exception of syphilis, all of the other forms of bacteria-mediated interstitial keratitis benefit from the treatment of the underlying systemic infection.

Similarly, most viral-mediated interstitial keratitis will respond briskly to the addition of topical corticosteroids, but may benefit from the adjunctive use of topical or systemic anti-virals, specifically trifluridin,e in Herpes Simplex-mediated interstitial keratitis or acyclovir/valacyclovir in Herpes simplex and Herpes Zoster. The HEDS study specifically concluded that treatment of 'Herpes Simplex Virus-mediated interstitial keratitis resulted in less persistence/progression ofthe disease and faster recovery than placebo, but noted no difference in visual outcome or recurrence of disease at 6 months [1]. The addition of oral acyclovir vs. placebo in patients already on topical corticosteroids and trifluridine showed no improvement in resolution time or final visual outcome but did result in more patients experiencing visual improvement at 6 months follow-up [2]. Prophylactic treatment of Herpes Simplex Virus stromal keratitis patients with 400mg of Acyclovir twice daily, however, resulted in a statistically significant reduction of ocular (14% treated vs. 28% placebo) and orofacial recurrences during a 12-month treatment and 6-month follow-up [3]

Onchocerciasis manifests as centripetal sclerosing keratitis from the limbal migration of a filarial parasite, Onchocerca volvulus. Although there is a direct invasion of the parasite, the blinding interstitial keratitis exacerbated with the effective treatment and death of the parasite is thought to be due to an immune reaction to the release of its endosymbiont Wolbachia sp., suggesting that specific therapy against this bacteria may reduce the corneal complications.

With the exception of Acanthamoeba, the etiology of interstitial keratitis is either a systemic immune process, a systemic infection, or, in the case of some Herpesviridae, a regional infection not restricted to the cornea. Acute surgical intervention in the form of therapeutic keratoplasty would not be expected to be curative, and since, by definition, interstitial keratitis is largely non-ulcerative, and the need for urgent tectonic keratoplasty in its treatment is limited. Optical keratoplasty does have a role once the underlying disease has been effectively controlled or treated. These patients are at elevated risk of rejection because of the history of inflammation, as well as the concomitant neovascularization that is characteristic of most forms of interstitial keratitis.

Routine follow-up is essential in patients who undergo keratoplasty to ensure proper wound healing, prompt and appropriate removal of sutures, and to monitor for sequelae of the surgical procedure or post-operative medications including glaucoma, cataract formation, and secondary infection. Special attention in these higher-risk patients is required to monitor for rejection and recurrence of previous inflammation, especially if the original cause of interstitial keratitis remains uncertain. Visual rehabilitation in the form of spectacle, contact lens fitting, or refractive surgery is likely in most post-keratoplasty patients.

The prognosis for interstitial keratitis is good if recognized and treated early before significant corneal scarring has occurred. Because of the lack of ulceration, even with mild loss of tissue, patients can often see reasonably well after resolution of the keratitis. The prognosis for patients requiring keratoplasty is more guarded.