Extended Depth of Focus (EDOF or EDF), or Extended Range of Vision, is a new technology that has recently emerged in the treatment of Presbyopia-correcting IOLs. In contrast to multifocal intraocular lenses (IOLs) used in treatment of presbyopia, EDOF lenses work by creating a single elongated focal point to enhance “range of vision” or “depth of focus”. 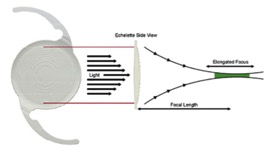 As of July 15th 2016, the TECNIS Symfony IOL (Abbott Medical Optics/AMO, Inc. of Santa Ana, California, Now Johnson-Johnson Vision) was the first FDA approved lens of its class.[1] The IOL has a biconvex wavefront-designed anterior aspheric surface and a posterior achromatic diffractive surface with an echelette design (Figure 1). This proprietary format creates an achromatic diffractive pattern that elongates a single focal point and compensates for the chromatic aberration of the cornea. Its overall diameter is 13.0mm, with an optical zone of 6.0mm, and is available in power ranges from +5.0 to +34.0 D, while incorporating an ultraviolet light-absorbing filter. While still a diffractive optic, the extended foci allows for nearly all light to be transmitted through the IOL, with the reduction of chromatic aberrations.[2]

Both multifocal and EDOF lenses have been shown to increase levels of spectacle independence, however both lens types may be associated with unwanted photic phenomena such as glare and halos.[2] In several studies, the Symfony IOL has performed similarly with monofocal and multifocal IOLs in regards to distance visual acuity results, with a trend toward superior uncorrected intermediate visual acuity, while multifocal IOLs have trended toward having superior uncorrected near visual acuity results.[2][3][4][5]

A large prospective multi-center study demonstrated that the Symfony IOL provided comparable clinical outcomes in distance visual acuity to monofocal and current multifocal lens technologies, and possibly better intermediate visual acuity outcomes compared to current multifocal technology, with high levels of patient satisfaction. [5] 411 patients who had bilateral implantation of the extended range of vision IOL, with intended micro-monovision in 1 group (monovision group) and intended emmetropia in the other group (non-monovision group). The mono-vision group was comprised of 112 patients, while the non-monovision group was made up of 299 patients. The mean decimal uncorrected distance (UDVA), intermediate (UIVA), and near (UNVA) visual acuities were 0.95, 0.81, and 0.69, respectively, 4 to 6 months postoperatively. Significantly better UIVA (P = .003) and UNVA (P = .011) were found in the monovision group than in the non-monovision group. Spectacle independence was high, with only 14.4% of eyes requiring reading spectacles frequently.[5] In the same study, dysphotopsias (halos, glare, or starbursts) were reportedly low, with more than 90% of patients reporting no or mild halos, glare, starbursts, or other photic phenomena.

Dysphotopsias are multi-factorial, and may be pupil-dependent.[10][11][12] In an in vitro analysis of the TECNIS Symfony and another EDOF IOL (not commercially available in the U.S.), the Symfony IOL demonstrated increasing negative spherical aberration with increasing pupil size.[13] Higher order aberrations (HOAs) were noted to be 'not significant' with the Symfony IOL. [13]

IOL implantation after cataract extraction, or as part of refractive lens exchange, is a relatively safe procedure. However, risks that come with invasive eye surgery are still significant and may include, but are not limited to infection, increased IOP, corneal edema, posterior capsular opacification (PCO), IOL decentration, macular edema, and retinal detachment.[14] Severe, vision threatening infections (e.g. endophthalmitis) are rare, but possible, adverse events associated with any intraocular surgery.

High levels of patient satisfaction were achieved in an initial study. One hundred two patients (91.1%) and 283 patients (94.6%) in the monovision and non-monovision groups, respectively, said they would recommend the same procedure to their friends and family. In the entire cohort of 411 patients, 385 (93.7%) would recommend the surgery and 388 (94.4%) would choose the same IOL again.[5]