Intraocular lens implants (IOLs) are used in both refractive lens exchange and cataract surgery to replace the natural lens of the eyes and correct for refractive errors. Over recent years, many improvements in intraocular lenses have allowed for the development of a wide-spectrum of lenses beyond the traditional monofocal lens implants. These developments include presbyopia-correcting IOLs which provide a treatment option for presbyopic patients who do not qualify for laser refractive surgery and do not want to rely on reading glasses.[1] Presbyopia-correcting lenses can be divided into three broad categories: multifocal IOLs, extended depth of focus IOLs, and accommodative IOLs.

Multifocal IOLs consist of multiple zones of lens power that produce more than one focal point, allowing for enhanced vision at both near and far.[2]  The multifocal IOLs can be further subdivided into diffractive and refractive lenses.

Diffractive IOLs such as Tecnis and ReSTOR create two distinct images at near and far.[3]

Diffractive IOLS are typically less limited by pupillary diameter, but can result in poorer intermediate vision.[4]

Trifocal IOLs are popular presbyopia-correcting IOLs in many areas outside of the United States, and have recently become available in the US with the introduction of the Alcon PanOptix Trifocal IOL. Compared to the bifocal diffractive IOL, the trifocal IOL improves intermediate vision by providing a third focus. The higher order aberrations and visual quality have been shown in many studies to be similar to that of bifocal diffractive intraocular lenses; however, in bench testing, they are associated with increased halos and reduced distance visual quality when compared to bifocal diffractive IOLs.[5][6]

Refractive IOLs such as ReZoom (AMO) and Array (AMO) function by creating multiple focal points that allow for viewing at all distances.[3] The Array zonal progressive silicone IOL consists of five concentric zones alternating between distance- and near- dominant.[2] The ReZoom IOL is a second-generation refractive IOL, that enhanced some aspects of the Array design, such as enlargement of the second and third zones, reduction of the fourth and fifth zones and an aspheric transition between zones so that visual disturbances could be reduced.[1] While refractive IOLs produce good quality distance, intermediate, and near vision, they are limited by pupillary diameter because of the zonal design of the lens.[4]

Extended depth of focus (EDF) IOLs are a newer category of IOLs that aims to give an elongated focus of vision without compromising distance visual acuity[7]. The Symfony IOL (Johnson & Johnson Vision/AMO, ZXR00) is an example of an EDF lens that extends the depth of focus through a combination of effects from its echelette design, reduced chromatic aberration and negative spherical aberration. Intermediate vision is improved compared to standard bifocal multifocal IOLs, but near vision may only be modestly improved. Additionally, while patients may have better levels of contrast sensitivity and less ocular aberrations, they may experience a unique visual phenomenon typically described as "starbursts."[7][6] The Vivity IOL (Alcon) is a non-diffractive EDF IOL offers distance, intermediate and near vision.

The only accommodative IOL to be FDA-approved is the Crystalens IOL (Bausch and Lomb), a 4.5 mm optic (AO and HD variants have 5mm optic) with two haptic plates and four polyimide loops that help fix it into place within the capsular bag.[8] Its placement within the capsular bag allows it to simulate the natural accommodative process in the eye by changing power in response to ciliary muscle contraction.[8] The Crystalens accommodative IOL provides good distance vision and the advantage of fewer visual disturbances compared to multifocal IOLs.[8] As this lens is made of silicone, it should be avoided in patients with asteroid hyalosis, and patients who may require retinal surgery with silicone oil injection. 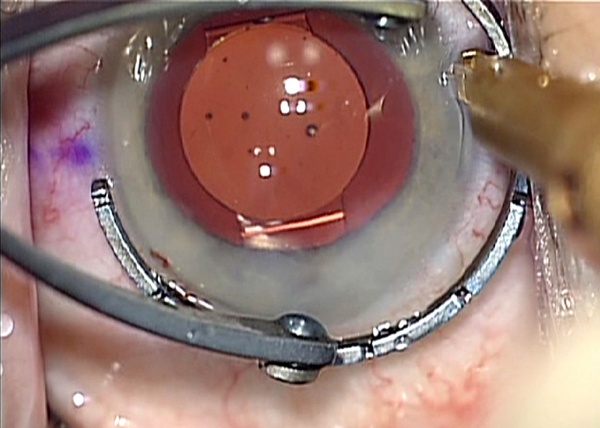 Patients with diffractive and refractive multifocal lenses have better near vision than those with accommodating lenses and monofocal lenses.[9] In a prospective randomized study comparing Crystalens, ReSTOR, and Tecnis IOLs, the ReSTOR demonstrated better UNVA compared with Crystalens and Tecnis, with the Crystalens accommodating IOL demonstrating better intermediate and low-contrast distance-corrected vision compared to ReSTOR and Tecnis.[10],[11] However, there was no difference in uncorrected distance visual acuity (UDVA) between the three groups.[10]A meta-analysis of 20 clinical trials looking at 11 monofocal and 35 multifocal IOLs, also found that patients with the ReSTOR IOL had significantly better UNVA than all other multifocal IOLs.[12]

IOL implantation after cataract extraction or as part of refractive lens exchange is a relatively safe procedure but carries the risks that come with invasive eye surgery. These surgical complications include, but are not limited to infection, increased IOP, corneal edema, posterior capsular rupture, vitreous loss, posterior capsular opacification (PCO), IOL decentration, and retinal detachment.

The other major side effect experienced by patients after IOL implantation are visual disturbances. Reduced visual quality and visual phenomena such as halos, glare, and starbursts are characteristic of multifocal IOLs due to the light scatter that naturally occurs when transitioning between near and far zones .[14]  Patients with monofocal IOLs experienced less visual distortions and halos compared to patients with multifocal IOLs.[15] In a prospective study of 95 eyes comparing multifocal IOLs to monofocal IOLs, 29% of multifocal patients reported glare while 25% reported halos, compared to 19% and 12% in the monofocal group, respectively.[16] Accommodative IOLs as a whole produce less visual disturbances compared to multifocal IOLs. This can be explained by the design of the accommodative lens which contains a smooth central surface and acts to enhance near vision through movement in conjunction with ciliary muscle contraction. This is in contrast with multiple zones of optical power in a multifocal IOL that can result in scattering of light and visual disturbances. EDF lenses, while providing preserved visual quality with fewer halos, can still produce a relatively unique photic phenomenon generally described as starbursts.

Intraocular lenses produce high levels of satisfaction and freedom from spectacles. ReSTOR IOLs produced high levels of patient satisfaction, with 93.1% of patients reporting a positive change in vision, 88.2% reporting better postoperative vision, and 78% reporting resolution of their vision problems.[17] In addition, spectacle-free rate improved significantly from just 6.4% preoperatively to 87.2% after ReSTOR implantation.[17] Another prospective study using the ReSTOR IOL after bilateral refractive lens exchange, found that all patients reported satisfaction with their visual outcomes, but rated intermediate vision lowest.[18] A study comparing the Tecnis diffractive IOL to the ReZoom refractive IOL found higher levels of patient satisfaction and less visual disturbances in the Tecnis group, but less reported problems with intermediate vision in the ReZoom group, despite no differences in near or distance uncorrected vision between the two groups.[3] This may be explained by the nature of the two lenses, with diffractive lenses producing clear images at near and far with less-than-optimal intermediate vision, and refractive lenses improving vision at all distances. The Crystalens accommodative IOL produced good patient satisfaction with patients reporting adequate vision at all distances in order to complete activities of daily living, with the exception of needing reading glasses for fine newspaper print.[19]

Despite the high level of patient satisfaction with IOLs, studies have demonstrated that patients are no more satisfied with IOLs than with other correction strategies. In a meta-analysis of 20 clinical trials comparing multifocal and monofocal lenses, patients with multifocal IOLs were 3.6 times less likely to require spectacles compared to patients with monofocal IOLs.[12] However, there was no difference in patient satisfaction between patients in the monofocal and multifocal groups.[12],[15] A prospective study comparing refractive lens exchange with multifocal IOL implantation to LASIK-induced monovision, found no significant difference in patient satisfaction or spectacle dependency between the two groups.[13]  Although the new generation multifocal IOLs are an effective means of presbyopic correction, patients seem to be no more satisfied with them than other corrective modalities.