Basal laminar drusen/Cuticular drusen is an uncommon entity. Although originally thought to be distinct from age-related macular degeneration, it is now considered to be in the same spectrum as macular degeneration. Findings include numerous small yellow drusen on examination, which are more obvious on fundus auto-fluorescence. Fluorescein angiography (FA) demonstrates punctuate areas of early staining throughout the macula, with a “stars in the sky" pattern. The development of vitelliform macular lesions, choroidal neovascularization (CNV) and geographic atrophy (GA) may cause vision loss.

Basal laminar drusen are a subtype of drusen. It is considered part of a spectrum that includes age-related macular degeneration and is associated with mutations in the complement factor H (CFH) gene.[1] It has been shown to have similar substructure, composition and location as drusen associated with age-related macular degeneration with differing clinical examination findings as highlighted below.[2]

The etiology is not well understood. It is believed; however, that BLD share a similar biogenesis to drusen associated with age-related macular degeneration (AMD).[2]

Initially, basal laminar drusen were thought to be distinct from the drusen of age-related macular degeneration based on fundus examination, autofluorescence, fluorescein angiography and histopathology. Dr. John Donald Gass and colleagues described basal laminar drusen as areas of thickening of the retinal pigment epithelium basement membrane.[8] More recently, however, Russell and colleagues have shown similarities in basal laminar drusen and drusen from age-related macular degeneration in terms of their lipoprotein composition, ultrastructure, and sub-retinal pigment epithelium localization.

The pathophysiology is not fully understood. The most well studied cause is a mutation in the CFH gene of the alternative pathway. The Tyr402His allelic variant in the CFH gene is associated with the presence of basal laminar drusen.[3] Because of the association with the CFH Tyr402His variant, it is hypothesized that overactivity of the complement cascade is a contributing factor.[9]

A potential life cycle has been postulated with BLD beginning as “small nodules of hyalinized, protein-rich material external to the RPE” progressing to clusters of drusen coalescing to facilitate a “transport barrier between the RPE and choriocapillaris”. This may act as a locus of inflammation subsequently increasing the risk for certain complications delineated below.[5]

The diagnosis of basal laminar drusen is clinical, based on dilated fundus examination, fundus autofluorescence and FA.

Young adults may be found to have basal laminar drusen on routine examination. Patients may have a family history of age-related macular degeneration. In cases that present with complications such as GA or CNV, visual complaints may also be present. 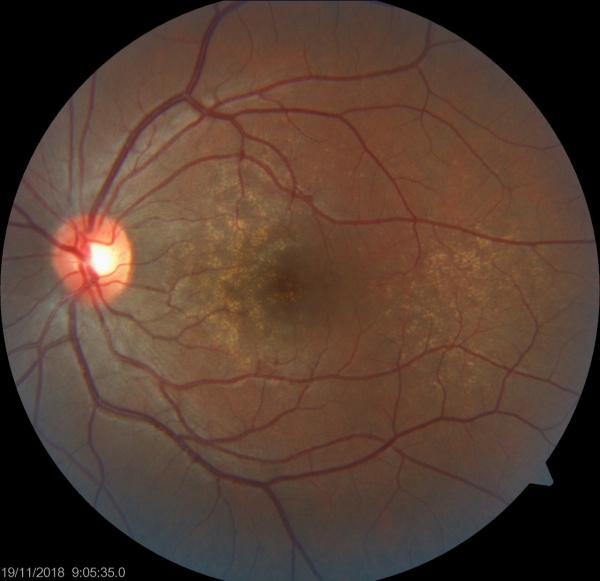 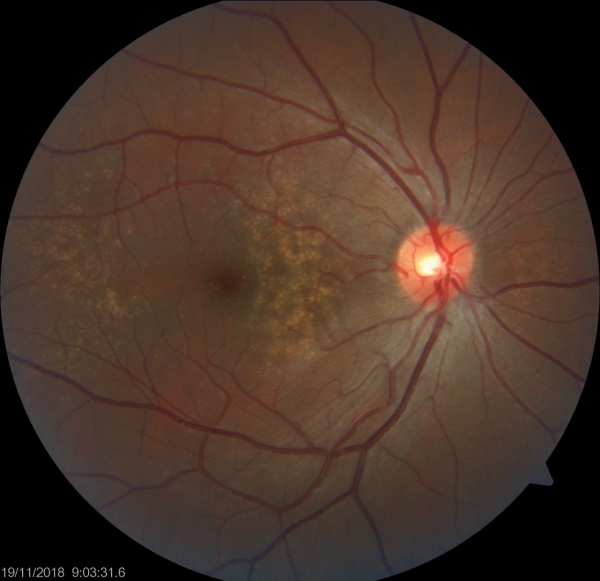 Multiple small, hard, subretinal, raised yellow drusen are seen underneath the RPE specifically between the RPE and inner collagenous layer of Bruch’s membrane.[2][5] The mean age of presentation is 57.9±13.4 years.[5]

Most patients are asymptomatic until late in life but should be monitored for complications as discussed below.

The classic appearance is multiple, diffusely distributed drusen which are more numerous on fluorescein angiography in a young adult.

Fundus photos show multiple, yellow, round accumulations sub-RPE. Fundus autofluorescence often demonstrates more numerous hyperautofluorescent drusen than seen ophthalmoscopically. The drusen can demonstrate central hypo-autofluorescence and a rim of hyper-autofluorescence.[5][10] Fluorescein angiography reveals a greater number of small drusen than seen clinically during the early arterio-venous phase. These are spread diffusely throughout the macula, with a classic “stars in the sky” appearance.[5][6] Optical coherence tomography depicts RPE elevations due to drusen beneath the RPE with the most common appearance being a “saw-tooth” appearance as shown in the image below.[5][7] 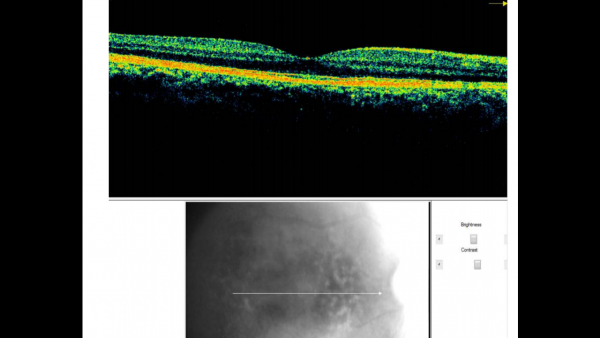 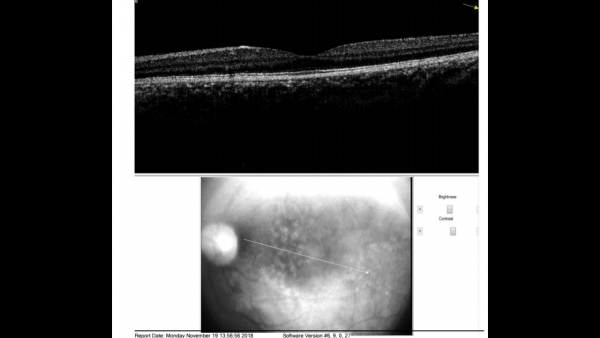 Patients with basal laminar drusen should be monitored for the development of “pseudovitelliform” retinal pigment epithelium lesions/detachment, CNV or GA which may be visually significant.

As the complete pathophysiology of BLD has not been elucidated and a CFH mutation has been implicated in the development of membranoproliferative glomerulonephritis type 2 (MPGN type II) (dense deposit disease)[11] and atypical hemolytic uremic syndrome (aHUS), it is recommended that renal function be monitored in those presenting with BLD especially at an early age (between 5 and 30 years). In addition, glomerulonephritis with isolated C3 deposits, a condition that is an intermediate between MPGN and aHUS, also has an association with CFH mutation.[1][13]

There does not appear to be a correlation between severity of disease within the kidney and the eye, though 80% of patients with dense deposit disease present with cuticular drusen.[12][14]

There appear to be differences in the prevalence of complications based on ethnic backgrounds.  For example, patients of Korean descent seem to exhibit both a lower rate of macular complications such as vitelliform lesions and differing proportions of complications such as GA and CNV compared to white ethnic groups.[15] And basal laminar drusen show some evidence of earlier age of onset in Japanese patients.[16]

In cases of isolated basal laminar drusen, no therapy is indicated. Patients should be observed to monitor for the development of CNV or geographic atrophy. CNV should be treated when detected. Photodynamic therapy has been shown to be effective in cases of basal laminar drusen complicated by CNV.[17] There have also been reports of improvement in vision in CNV patients with BLD through the use of bevacizumab injections.[12] Vitelliform pigment epithelial detachments may be observed and have been reported to resolve spontaneously;[8] treatment with photodynamic therapy can worsen vision in these cases.[18] Similarly, vitelliform macular detachments associated with BLD have not been responsive to anti-VEGF intravitreal use.[19] It is unclear whether AREDs supplements, shown to have some benefit for patients with age-related macular degeneration, are of benefit in patients with basal laminar drusen.[20]

Patients with basal laminar drusen should be followed regularly to monitor for the development of CNV. Patients who develop CNV should be monitored frequently to assess response to treatment. Amsler grid or preferential hyperacuity perimetry are important measures for self-monitoring.

Fundus examination of family members is important as well.

There appear to be age-related variations in the complications associated with BLD. Pigmentary RPE changes appear to be the most common complication (47.5%), followed by large drusen, vitelliform lesions, GA and CNV. Each of these present with a statistically significant higher proportion in patients older than 60 years of age compared to those 60 years and younger.[5]

Treatment options focused on prevention or mitigating progression of BLD are needed. Areas of current study include compounds targeting the complement pathway given its role in the pathophysiology of BLD. As affecting the complement pathway systemically will likely lead to a myriad of adverse effects, local administration may prove to be more fruitful. A potential role for recombinant complement factor H may also show promise.[12]

Claudia Krispel, MD, PhD for critical review of this article.