Congenital Stationary Night Blindness (CSNB) is recognized by the code H53.63 as per the International Classification of Diseases Version 10 (ICD-10) nomenclature.

Classically CSNB has been categorized into those with normal appearing fundi and those with retinal changes (Figure 1). CNSB without fundus abnormalities can be subdivided into two categories based on electroretinogram (ERG) findings: 1) Riggs-type and 2) Schubert-Bornstein which can be further subdivided into complete (cCSNB) and incomplete (iCSNB) subtypes .[2][3][4] cCSNB is characterized by a defect that localizes to the ON bipolar cells, leading to an dysfunction in transmission through the bipolar cells which is evidenced by a lack of the b-wave on scotopic ERG. In iCSNB, the defect is localized to the photoreceptor synapse, leading to altered signaling to both ON and OFF bipolar cells which is illustrated by a diminished but recordable rod ERG response.[4] Fundus albipunctatus and Oguchi disease are two entities within CSNB that are associated with fundus findings.[1] The specific clinical and ERG findings (see Clinical Diagnosis) in each subtype can be specifically explained by the gene mutation and its relation to the phototransduction cascade (Figure 2)(Figure 3). 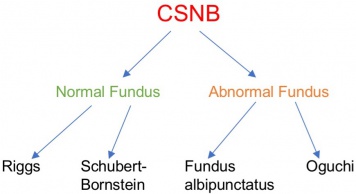 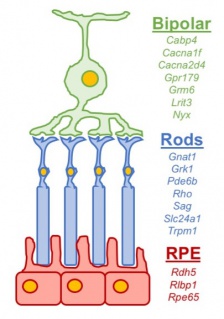 CSNB is a retinal disease that primary affects signaling processing within rod photoreceptors, retinoid recycling in the RPE, and signal transmission via bipolar cells (Figure 2). Seventeen genes with more than 360 mutations and 670 alleles have been found to be associated with CSNB (Table 1, Figure 3).[1]

There is currently no preventative measures for this disease.

A detailed personal and family history for night blindness and/or decreased vision should be elicited. Classically it was thought that patients with CSNB present with nyctalopia from birth though recent evidence indicates that not all patients are aware of their night vision dysfunction. [5] [12] In a review of children with iCSNB only 54% of patients presented with nyctalopia and thus it is important for clinicians to not "rule out" CSNB from the differential if there is no complaint of nyctalopia.[5] 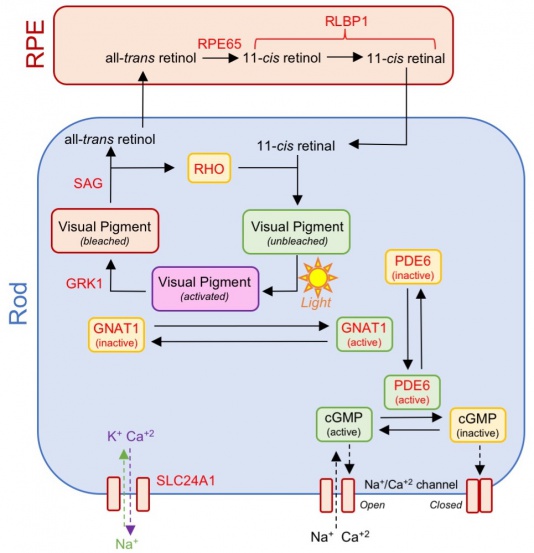 Figure 3. Schematic of proteins involved in phototransduction that can cause CSNB. Proteins whose dysfunction can cause CSNB are marked in red. RPE = retinal pigment epithelium; cGMP = cyclic guanosine monophosphate

Patients should undergo a full ophthalmic examination, including a dilated fundus exam to evaluate for congenital night blindness with fundus abnormalities. Visual acuity is typically reduced with a median of 20/40 in cCSNB and 20/60 in iCSNB.[5] Additionally, formal color vision testing should be performed as a small minority of patients with cCSNB will have dysfunction with color vision.[1] In Riggs-Type and Schubert Bornschein CSNB the fundus is normal other than myopic changes which are commonly found.[13]

Patients with CSNB may complain of poor night or dim-light vision. These symptoms are often subjective and may not be appreciated by those who live in well-lit urban areas. Photophobia is a common complaint especially in bright light conditions. Patients can also present with myopia, strabismus, and nystagmus. Eye-movement recordings in CSNB patients reveal a predominantly disconjugate pendular nystagmus of small amplitude, high frequency, and oblique direction.[1] 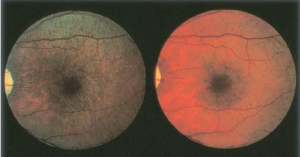 Figure 4. Fundus photographs demonstrating the Mizuo-Nakamura phenomenon in a patient with X-linked cone dystrophy. The image in the dark-adapted state (right) is unremarkable, but after exposure to light, the fundus has a yellow iridescent sheen (left). Image from BCSC.

Fundus albipunctatus and Oguchi disease are two entities within CSNB that are associated with fundus findings. Patients with fundus albipunctatus demonstrate scattered yellow-white dots in the posterior pole (sparing the macula) that extend to the mid-periphery.[1] These dots may disappear over time though they are typically stable.[14] They are presumed to contain 11-cis retinal precursors (retinoids) and exist from the RPE/Bruch membrane complex to outer nuclear layer.[15] Those with Oguchi disease demonstrate the Mizuo-Nakamura phenomenonin which the fundus is unremarkable in the dark-adapted state but has a yellow iridescent (golden) sheen after light exposure (Figure 4). The mechanism underlying this process is currently not well understood.[1]

Electroretinography (ERG) is the most valuable ancillary test in distinguishing subtypes of CSNB. Riggs-Type CSNB and Schubert-Bornstein CSNB have pathognomonic full-field ERG tracings which are used to distinguish the two entities (Figure 5). 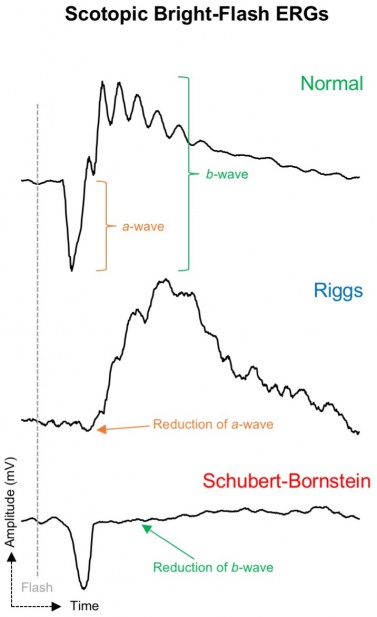 The Riggs subtype is associated with photoreceptor dysfunction which presents with selective loss of rod function. The dim flash scotopic ERG is flat whereas the strong flash scotopic ERG shows a decreased a-wave and b-wave amplitude which is in contradistinction to the Schubert-Bornstein which demonstrates a normal a-wave. Photopic ERG remains normal, indicating preserved cone function.[1]

The Schubert-Bornstein subtype is associated with bipolar cell dysfunction. The ERG reflects dysfunction in signaling between photoreceptors and bipolar cells or a post-phototransduction transmission defect. The most common pattern observed is an electronegative scotopic ERG, characterized by a normal a-wave (as phototransduction in the rod photoreceptors is still functional) but a reduced b-wave (due to bipolar transmission dysfunction).[1]

The complete form of Schubert-Bornstain is associated with ON bipolar pathway dysfunction. Photopic ERG often exhibits a normal a-wave but with a broadened trough and a sharply increasing b-wave with loss of oscillatory potentials.  A long response stimulus can be used to confirm the diagnosis: the ON pathway shows the characteristic negative ERG while the OFF pathway is normal.[1] The incomplete form of CSNB is associated with ON and OFF pathway dysfunction. The scotopic dim-flash ERG signal is present, but the amplitude of the a-wave is diminished, while the bright-flash ERG shows an electronegative waveform. The photopic response is more severely affected compared to the complete form: the flicker ERG signal is delayed and often displays a bifid peak. The difference is due to residual rod function.[4]

ERG plays a critical role in the diagnosis of CSNB. As previously described the ERG is crucial to distinguish the four subtypes of CSNB and also assists in distinguishing between cCSNB and iCSNB.

Optical coherence tomography (OCT) can be helpful in evaluating fundus albipunctatus and Oguchi disease. In Fundus albipunctatus there are hyperreflective deposits in the RPE that extend up to the outer nuclear layer which correspond to the visualized dots on fundus examination.[15][18] OCT studies in Oguchi disease hypothesize that the sheen is due to an accumulation of material (presumably rhodopsin) in the shortened rod outer segments.[19]

Fundus autofluorescence typically demonstrates a decreased background autofluoresence which is consistent with a dysfunctional retinoid cycle.[1]

Once the specific subtype of CSNB has been elucidated based on clinical and ERG findings, selective gene testing can be procured.

Compared to CSNB, which is nonprogressive, retinitis punctata albescence is progressive and leads to increasing symptoms and gradual deterioration of ERG and visual fields.

Misdiagnosis is very common and patients are typically diagnosed with strabismus, myopia or congenital motor nystagmus before CSNB is eventually diagnosed.[12]

There are currently no treatments for CSNB.  However, a small nonrandomized prospective study of seven patients with fundus albipunctatus (defect in RDH5 gene) treated with high dose oral 9-cis-beta-carotene demonstrated improvement in visual field and ERG testing.[20] Photoreceptor replacement by transplantation and gene therapy are modalities under investigation that may be paradigm shifting in managing CSNB.

Generally, the clinical course of patients with CSNB does not change over time. The longest follow up documented in the literature is a patient who was followed for 38 years. Further accumulation of clinical date is needed to establish prognostic factors for CSNB.[21]