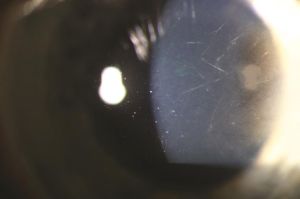 The cornea is a highly specialized tissue that must simultaneously maintain a protective barrier for the eye against pathogens and environmental insults and yet provide a transparent and precisely shaped optical structure. Corneal nerves play an important role in stimulating defensive reflexes such as tearing, blinking, and aversion from noxious stimuli. As such, the cornea is a highly innervated structure, with a density of free nerve endings that is 300 to 600 times greater than the skin.1 Long ciliary nerves are comprised of sensory fibers which penetrate the sclera posteriorly and course through the suprachoroidal space to the corneal limbus. These nerves then travel through the corneal stroma in a radial fashion and ultimately penetrate Bowman’s layer to provide free nerve endings to all levels of the epithelium.2

In vivo confocal microscopy (IVCM) allows significantly better analysis of corneal nerves with magnification of up to 800x in vivo as compared to standard slit lamp biomicroscopy with magnification of up to 40x.3 Confocal microscopy makes conjugate the light rays focused by the condensing lens on the object and the light rays focused by the objective lens. This principle thereby reduces light reflections from outside the focal plane. IVCM does not disrupt the tissue being studied, and thus it is a helpful noninvasive technique, but it is not as readily available in each office as standard slit lamp biomicroscopy. The conditions listed in this synopsis involve prominent corneal nerves that can be seen at the standard slit lamp examination.

The thickest stromal corneal nerves (axon bundles) can be seen with the slit lamp biomicroscope typically in normal patients only in the peripheral one third of the cornea. Enlarged or prominent corneal nerves seen in the central cornea (figure 1) may be an early hallmark of important systemic diseases.4 Noticing enlarged corneal nerves and investigating their etiology can be lifesaving in certain cases, such as individuals with undiagnosed multiple endocrine neoplasia. Corneal nerves can also become prominent in intrinsic corneal diseases (for reasons that are not fully known but may include increased myelination or degeneration of axons).

Systemic Causes of Prominent Corneal Nerves Multiple Endocrine Neoplasia Type 2 (MEN 2 or MEN II)- divided into subtypes MEN 2A, MEN 2B, and familial medullary thyroid carcinoma (MTC), all autosomal dominant conditions arising from mutations of the RET gene. MEN 2A and 2B are associated with enlarged corneal nerves.

Multiple Endocrine Neoplasia 2B (MEN 2B) MEN 2B is an autosomal dominant syndrome with high degree of sporadic occurrence from de novo mutations on the RET (Rearranged during Transfection) protooncogene on chromosome 10. Medullary thyroid cancer occurs in essentially 100% of carriers of the mutation, usually by young adulthood. Other findings include pheochromocytoma in 50% and Marfanoid habitus in 75% of genetically affected individuals. Oral findings include irregular, dome-shaped, pink, sessile mucosal neuromas on the anterior and lateral dorsal surface of the tongue in more than 90% of carriers, arising as early as infancy, and said to be almost pathognomonic for MEN 2B (see mucosal neuroma syndrome below as an exception), as well as mucosal neuromas near the vermilion border of the lips.5,6

Ocular findings consist of prominent corneal nerves seen on slit lamp examination (figure 2) extending to the pupil area in almost 100% of carriers, seen as young as 2 years of age, mucosal neuromas of the eyelid margin (figure 3) creating a pink, undulating thickening and eversion of the eyelid margin, and dry eye (in 67% of carriers). Aqueous tear deficiency or inability to cry due to autonomic deficiency may be early signs of MEN. Young infants may also show diminished psychogenic or emotional crying due to temporary incomplete development of crying reflexes.7

Recognition of the prominent corneal nerves and mucosal neuromas on eyelids, tongue, and lips should prompt referral for MEN 2B workup (genetic and endocrine testing). It is recommended that patients who are carriers for MEN 2B have a prophylactic thyroidectomy to prevent medullary thyroid carcinoma, a surgery which can be lifesaving. A number of case reports document individuals referred by their ophthalmologists for testing for MEN in a setting of prominent corneal nerves who proved to have medullary thyroid carcinoma in situ, which was successfully removed before metastasis.8 When faced with prominent corneal nerves in an otherwise normal cornea, one of the prime questions, to paraphrase Shakespeare, is “2B or not 2B?”

Multiple Endocrine Neoplasia 2A (MEN 2A) MEN 2A has a high incidence of medullary thyroid carcinoma (95%) and pheochromocytoma (50%), but unlike MEN 2B, MEN 2A has a high frequency of parathyroid tumors (20-30%) and does not manifest mucosal neuromas or Marfanoid body habitus. Prominent corneal nerves have been described in MEN 2A, but not as frequently or as prominently as in MEN 2B.9 The lack of easily visible mucosal neuromas makes the diagnosis of MEN 2A less obvious initially than that of MEN 2B, but MEN 2A should also be considered in individuals with prominent corneal nerves and otherwise normal corneas, and prophylactic thyroidectomy done if a diagnosis of MEN 2A confirmed.

Mucosal Neuroma Syndrome (MNS) Multiple cases have been reported of mucosal neuroma syndrome (MNS), which consists of prominent corneal nerves and mucosal neuromas, but with no genetic defect on the RET gene and no associated endocrine tumors.10

Refsum disease Corneal nerves may be prominent in Refsum disease, which is an autosomal recessive disorder caused by mutations in the PHYH and PEX7 gene.11 Phytanic acid, a fatty acid acquired through dietary intake, accumulates abnormally in tissues, causing retinitis pigmentosa and nyctalopia, often starting in childhood, along with anosmia, and later in life ataxia, hearing loss, ichthyosis, and cardiac arrhythmia. Treatment involves dietary restriction of phytanic acid.

Neurofibromatosis Type 1 (NF 1) NF 1 is an autosomal dominant disease carried on chromosome 17q11.2. Half of cases represent new mutations. Severity is highly variable, and morbidity may occur from optic pathway gliomas, spinal cord and peripheral nerve neurofibromas, scoliosis, and neurologic impairment. In addition to almost universal presence of café-au-lait spots and iris Lisch nodules, enlarged corneal nerves have been reported in various series in 0.5%, 6%, and 22% of patients.13,14

Leprosy (Hansen’s Disease) Leprosy is an infectious disease caused by Mycobacterium leprae which is rare in the U.S. but endemic in Asia, Africa, and Latina America. The incubation period may be as long as 8-10 years, causing granulomatous lesions of skin, organs, and sensory and motor nerves. Keratitis (figure 4) and uveitis may occur; however, enlarged, beaded corneal nerves, especially seen in the superotemporal cornea, may be an early finding of disease.4

Lipoid Proteinosis Lipoid proteinosis, also called hyalinosis cutis et mucosae, is a rare autosomal recessive disorder carried on chromosome 1q21. Hyaline deposits occur on skin, mucous membranes, and viscera, beginning in early childhood. A hoarse cry may be noted in early infancy due to laryngeal involvement. Moniliform blepharosis, or bead-like papules along the eyelid margins, is a highly characteristic finding which helps in recognition of the diagnosis but may be noted in only about 50% of affected individuals. In a study by Al-Faky et al., prominent corneal nerves were seen with the slit lamp overlying the pupil margin or pupil axis in 7 of 7 lipoid proteinosis patients as young as 5 years of age, indicating that prominent corneal nerves may be a particularly useful aid in diagnosis of lipoid proteinosis.15

Ichthyosis Ichthyosis is a heterogeneous group of hereditary diseases in which symmetrically distributed visible scales occur on the skin starting in infancy or childhood. Inheritance may be autosomal dominant, autosomal recessive, or X-linked. Punctate deep stromal opacities may occur throughout the cornea. Ichthyosis is often found on lists of etiologies for enlarged corneal nerves. Refsum disease (see above) is one cause of ichthyosis that is associated with prominent corneal nerves. In other types of ichthyosis, corneal nerves may occasionally become prominent. In a study by Jay et al., one of 62 patients were found to have “unusually prominent” corneal nerves.16

The radial keratoneuritis consists of infiltrates surrounding corneal nerves, creating multiple, linear, branching stromal opacities starting in the paracentral cornea and extending toward the limbus (see figure). The cause of the perineural infiltration is not known but may occur due to a predilection for the organism to spread more easily adjacent to the corneal nerves. Radial keratoneuritis may occur in more than half of Acanthamoeba keratitis cases within the first month, but the findings diminish in frequency after that.18 Since only a few nerves may be involved, a careful search of the cornea is recommended to detect the perineural infiltration. Although radial keratoneuritis is a classic finding of Acanthamoeba keratitis, it is not entirely pathognomonic, as it has been reported to occur in Pseudomonas keratitis as well. Ultimate diagnosis of Acanthamoeba keratitis may require in vivo confocal microscopy (IVCM) to visualize protozoal cysts, PCR or culture analysis of corneal scrapings, or histologic examination of surgical specimens.19 Extended topical and sometimes surgical therapy is needed to eradicate the Acanthamoeba.